An Argument for Incoherence 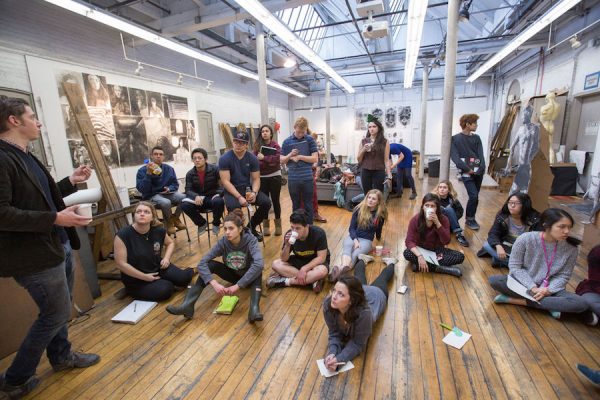 About thirty seconds pass by silence, then the suggestions start pouring in. It’s usually lazy, ill-thought out advice such as “make it bigger,” and that’s only from those who are paying any attention anyway. Some dude, probably with a beard, starts spouting off the names of artists tangentially related to the work, and not because it’s helpful, but because he wants to show everyone how many artists he knows. And with that, the increasingly defensive student artist, in his or her studio, fends off this passive-aggression with the deftness of a defense attorney at trial.

If any of this sounds familiar to you, you’ve probably participated in an MFA or BFA critique. But what often happens in critique is, of course, not what’s intended. Ideally, engaged peers who are in the room — fellow students — spend time and invest consideration into the work they’re critiquing, providing valuable feedback that the artist internalizes and reflects upon, rather than immediately defending against. One problem with critiques is not that they are ‘misused,’ exactly, but that the model is fatally flawed in the first place.

One of the first major readings we all read in art school was Susan Sontag’s Against Interpretation. Yet, with all this touting of not interpreting the work, the college-level critique quickly devolves into some watered-down version of the Edmund Feldman model, the basis of which is… interpretation. It often even skips the important first steps of what I believe is this flawed model, which is to state objective facts about the work — instead visitors immediately leap to interpretation and judgment. In this, a green artist’s peers settle for a lax (or non-existent) “critical inquiry.” I often hear non-art people describe art as purely subjective, or that its meaning lies “in the eye of the beholder,” which is of course garbage. Art is abstractly objective, and its meaning requires an argument of facts and context. But this is too often lost on young artists who, when regarding the work of fellow artists, prioritize their feelings and (not very formed) opinions over structuring a case around the work, and in doing so they feed into this insidious stereotype.

But let’s say critiques ran purely Feldman-esque. Let’s say the studio visitors don’t jump to quick conclusions — that they spend time with the work, teasing out some facts from the artist and developing a critical argument that’s incisive and objective. The problem then lies with the recipient of all this thoughtful criticism. In the face of thoughtful critique, the artist may become defensive, or quietly internalize the information and decide, maybe at a later time, whether it’s good or bad advice. Or it’s a combination of the two. I feel like the problem with all of this is that, still, nobody knows what they’re talking about during the actual critique.

Why are we asking students to concretize a premature judgement of the work when they’re still learning themselves, still absorbing a basic foundation of art history? More so, why do we ask an artist to defend her work when she isn’t even supposed to know what she’s doing yet? And perhaps, most importantly: Why is anyone okay with an art student having such a solid grasp of her own work that she can fully articulate it while she is still in school? If any artist, much less an art student, can easily and specifically enumerate exactly what she is doing and why (in the spirit of “professionalism”?), the work is probably too obvious, and therefore fundamentally problematic.

Young, impressionable, eager-for-validation artists are being asked to articulate their work when they aren’t and shouldn’t be ready. This form of critique does not mimic the behaviors of working artists, much less basic critical thinking skills. Instead of making snap judgments, visiting peers should focus, simply, on asking questions — and instead of having a smooth response, the student presenting her work should be encouraged to be inarticulate and confused, and fail.

Think about this: Do you sit down on that nice, earth-toned couch at your therapist’s office and, within five minutes of your opener, she provides the answers to all of life’s burning questions? A therapist’s job is not to dole out answers like an advice columnist, but instead to ask incisive questions, tailored to you, that are often not easy to answer. It’s common for a patient to trip over their words, because translating fractured thoughts and emotions into coherent sentences, much less a broader understanding of oneself, is hard, and it requires time, work — and failure. A person’s individual psychology is beautifully complex and strange. And art, which springs from this, is the same.

A critique that encourages pointed questions rather than comments, that raises more questions than answers, is the kind of engagement that demands a patient and seasoned rigor. It emphasizes the importance of critical inquiry over quick judgment, and it should encourage failure and incoherence. Incoherence may not be the desired outcome of a studio visit, but it in a student critique, it should feel safe, and be crucial.

Art Dirt: How to Have a Successful Studio...

Art school, like any other school, supposedly prepares the student for the next step. The real world. At some point, learning how to articulate ideas means that you can think more clearly about your work and improve it’s execution. This article suggests coddling the student and delaying this inevitability. In the long run, that does a disservice to the student.

I’d say this article suggests the opposite of “coddling”… it seems that the premise is that students should receive the barrage of ideas, critiques, suggestions, dudes with beards talking about other artists, etc, without defending themselves and creating a “thesis” when they are just starting out—critical conversations are going to happen if they plug along and keep making work, regardless of formal school critiques or not.

It’s not about a thin or thick skin…it’s about not pigeon holing your artwork and censoring yourself to fit in some tidy evolution that is verbally defensible.

Sidebar: who is the lucky person that doesn’t encounter “the real world” until they are out of grad school?

Interesting take Betsy. Thank you for addressing the topic. As you come out of the UH program I’m wondering if what you describe reflects your experience at UH or at Rice–or at other schools you’ve visited.

Having just finished the fall semester at UH with a flurry of undergrad and grad crits I would say that our process is much closer to, and accepting of, the stumbling sometimes incoherent discussion you seem to prefer (and that’s been my experience at UH for going on 25 years). From what I’ve seen, I would say that we seek to be both supportive and challenging, and never cruel or petty. We engage in crit/discussion to understand the motives of the developing artist under the assumption that the work is not yet succeeding entirely on it’s own. This is recognized as something of an anomaly in an artist’s life and process, since outside of the school context very few people talk about about art in depth–their own or others. So school discussions that are had around and about ones work are fleeting moments when attentions and intentions are focused. However difficult each persons crit experience may be, most agree that it’s worth it, and many miss the process when they’ve finished school. That said, I think the form and function of the crit deserves to be questioned, always. And since I participate in crits regularly, I’ll continue to wonder and ask how we can talk about art in ways that lead to making more and better art.

Crit “rules”: Everyone shows up on time; has a completed project (with leniency here); and is given time individually to express the intent of what they’ve created.

The only critiquing that goes on involves measuring stated intent against the effects/affects of the actual creation. Did the person’s project hit the mark? If so, in what ways? Or fall short? If the latter, how could the stated intent be sharpened or brought further into focus?

This approach requires people to listen to one another (rather than “judge” each other’s perceived talent), and this in itself helps all participants begin to make subtle discernment about the work of others as well as their own.

Whatever reference points people want to bring into this one singular focus of measuring intent against actual outcome is wide open. Artists, the tropes would convince is, should eschew rules. But artists do need some rules (shaping perimeters), especially when the group in question is comprised of students learning to follow assignments, develop skills in a range of different mediums, express themselves, and learn to treat others fairly. (That last one is important. It cuts down on the showboating, at least in art school.)

Well, If nothing else, Art Critiques made good deadlines and got the hustle out of complacent studentry…even if the productions were ‘night before affairs’. Critiques were probably the most fun/interesting part of a given art course, regardless of the internal struggles, tensions, and grumbling during the critiques themselves. A kind of group therapy session for 20 somethings. Hell, nobody was getting paid to produce the work, what other motivation was there at that age?
Of course, a perceptive teacher could point things of use out about just about everyone’s work. My favorite quote from faculty was “there are many ways to solve this challenge, …but this ain’t one of them”

Defending what you’re making seems weird to me. Ideally the thing made is mysterious to the maker too on some level. That’s not to say that there’s no ideas or content involved but it isn’t typically linear thinking and can require some serious skill to talk about let alone defend without flattening things out. Schjeldahl was amazing at this as are many poet-critics. My instincts, not being a poet-critic are “first do no harm”. Not sure whether my program was typical but I didn’t have this experience of being put on the stand so to speak 🙂