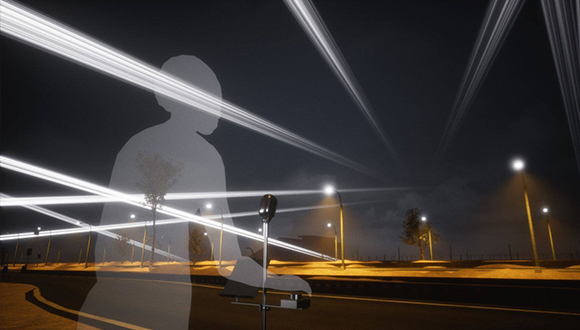 Border Tuner will consist of six interactive stations located on both sides of the U.S./ Mexican Border. Each station will feature a microphone, a speaker, and a large wheel or dial.

The installation titled Border Tuner, by Mexico-born artist Rafael Lozano-Hemmer (Glasstire covered it in May),  will be installed Wednesday, November 13, after two years of preparation. Lozano-Hemmer’s installation will preview at 6:30 p.m. at Bowie High School in El Paso and Parque El Chamizal in Cd. Juárez, and the public is invited to control the installation’s huge bridges of light with their own voices and participation, after 30 minutes of programming featuring a brief opening poetic provocation written by Andrea Blancas Beltrán and León De la Rosa Carrillo and performances by Maria Isidora Pérez, Gobernadora de la Nación Rararumi de Cd. Juarez, and Dr. Yolanda Chávez Leyva from the University of at Texas El Paso (UTEP).

Border Tuner highlights the unique historical and cultural connections between Ciudad Juárez, Chihuahua, and El Paso. It invites artists, writers, musicians and other border voices to present for the first 30 minutes each night after the opening, through Sunday, November 24. 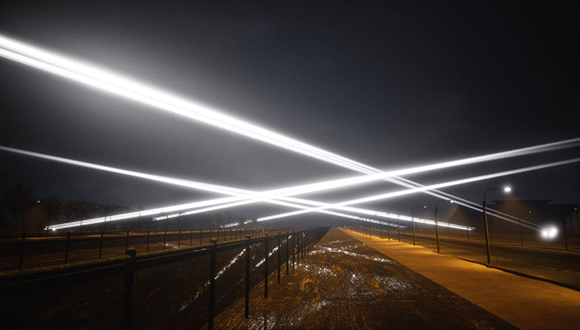 Utilizing participation and innovation, the project is designed to showcase the collaboration and interdependence between two cities and two countries.

Tonight, beginning at 8:30 p.m., Cuauhtémoc Medina, Curator of MUAC Museum in Mexico City, will give a talk at the forum tent followed by a discussion led by Border Tuner Curator, Kerry Doyle of UTEP’s Rubin Center.

To participate, go to one of the interactive stations on Bowie High School or Chamizal Park and turn the dial to direct the searchlights. Once your lights intersect with other beams the computer will open a bidirectional channel of communication so you can hear the remote participant, and vice versa. Or, log on to the website here or send a voice message via WhatsApp (+1-915-633-3784), which connects participants through the virtual dialogue switchboard. 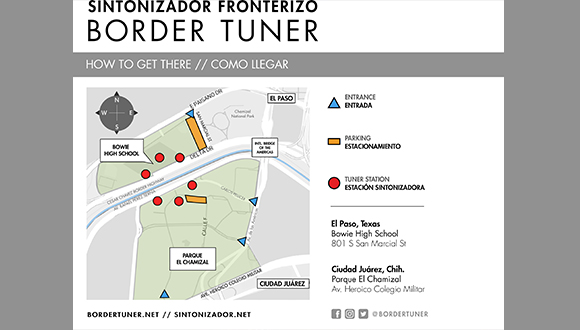 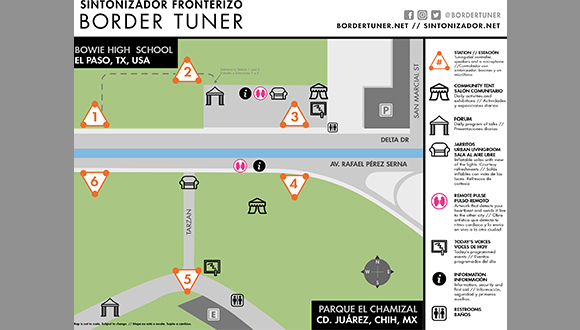 Born in Mexico City, Rafael Lozano-Hemmer is one of the most acclaimed artists working in public space. He is known for creating interactive installations that are at the intersection of architecture and performance art. Lozano-Hemmer’s art focuses on creating platforms for public participation. His large-scale interactive installations have been commissioned for events such as the Millennium Celebrations in Mexico City (1999), the Cultural Capital of Europe in Rotterdam (2001), the UN World Summit of Cities in Lyon (2003), the Winter Olympics in Vancouver (2010) and the pre-opening exhibition of the Guggenheim in Abu Dhabi (2015). Lozano-Hemmer was recently the subject of solo exhibitions at the San Francisco Museum of Modern Art, the MUAC Museum in Mexico City and the Museum of Contemporary Art in Sydney. He was the first artist to represent Mexico at the Venice Biennale with a solo exhibition at Palazzo Soranzo Van Axel in 2007. The artist has received two BAFTA British Academy Awards for Interactive Art in London, a Golden Nica at the Prix Ars Electronica in Austria, an Artist of the Year Rave Award from Wired Magazine, a Rockefeller Fellowship and the Trophée des Lumières in Lyon, among many other awards and accolades.

Shot over 10 years in 17 countries, the feature documentary film ‘Megalodemocrat’ follows Lozano-Hemmer’s career creating large-scale works that entice an increasingly isolated public into transforming their cities and reconnecting with one another. ‘Border Tuner,’ and in turn Juárez-El Paso, will be the final project and site featured in the film.

For more information on the project, visit the Border Tuner website here.