In 2017, Houston Center for Contemporary Craft (HCCC) featured the work of three military war veterans who used craft (and an attendant kind of art) as a therapeutic practice to deal with their trauma. One of the artists was Ehren Tool. (At the time, Glasstire posted on Instagram a snippet of his video that was part of his HCCC show.) 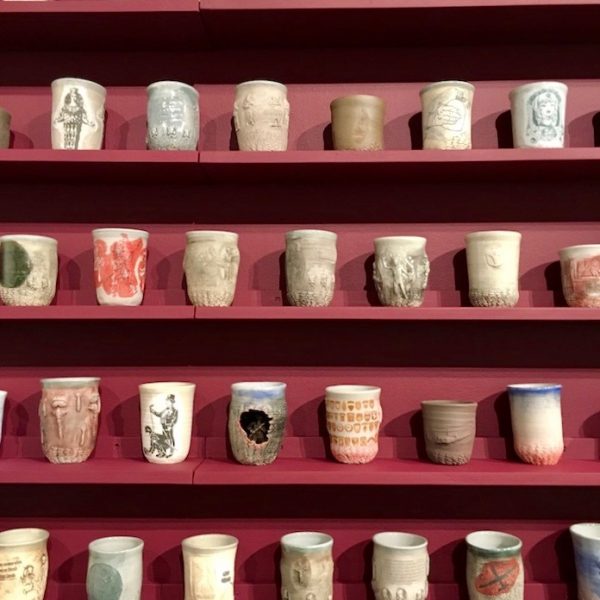 Ehren Tool, in the show ‘United by Hand: Work and Service by Drew Cameron, Alicia Dietz, and Ehren Tool” at HCCC in 2017

Earlier this year on Glasstire, in a love letter to HCCC, Christina Rees wrote: “…Ehren Tool, a Gulf War Marine, showed a wall of shelves lined with pottery cups he’d done on a wheel, and press-molded military and war emblems onto. More craft than art, but pretty dark in that plenty of the imagery was violent, or grief-stricken, or both. And yet then on the adjacent wall was his video that slyly strayed into art’s trenches: it showed a loop of his cups being pierced or blown apart in real time by single bullets: a tiny ballet of destruction. I watched it for ages.”

In May of this year, the New York Times ran a profile of the California-based Tool. Titled The Price of This Artist’s Work? A Conversation About the Horrors of War, the article explores how Tool “wants his visually brutal stoneware cups to start conversations about the grief and suffering of armed conflict. But his work can’t be bought.” 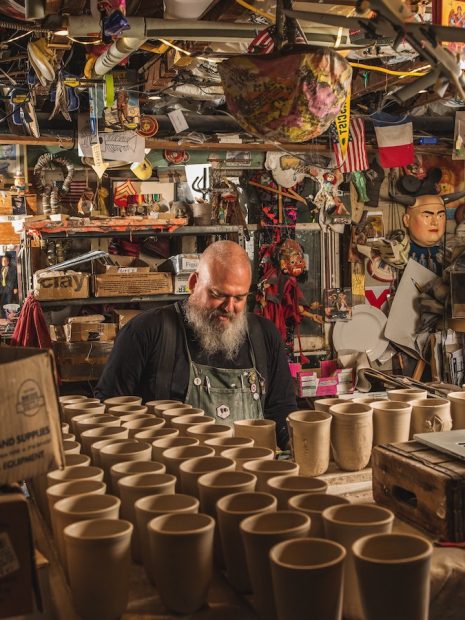 W. A. Ehren Tool in his studio at his home in Berkeley, Calif.Credit…Kelsey McClellan for The New York Times