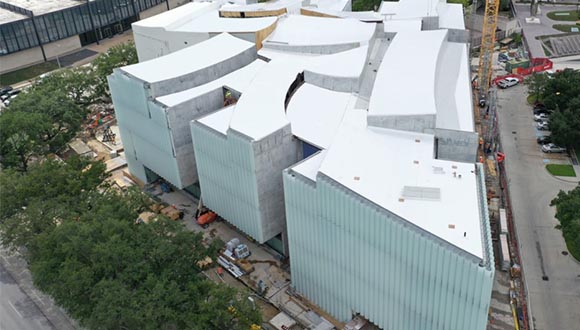 The multi-year project to expand and redevelop the Susan and Fayez S. Sarofim Campus of the Museum of Fine Arts, Houston (MFAH) will be completed in the fall of 2020, with the opening of the Nancy and Rich Kinder Building, according to an announcement by Gary Tinterow, director of the MFAH.

The Kinder Building is 183,528 square feet overall, excluding 53,685 square feet of below-ground parking on two levels. The building adds more than 100,000 square feet to the MFAH exhibition space, increasing it by nearly 75 percent. Rounding off the expansive new space is a 215-seat theater for film screenings, and a restaurant and café on the ground level.

Olafur Eliasson’s light-fixture installation will suspend from the ceiling of a second tunnel, emitting yellow light which limits viewer perception to yellow and gray tones as if, as the artist says, museum-goers are characters in a live-action monochromatic film. The tunnel will run between the Kinder Building and MFAH’s Glassell School.

Trenton Doyle Hancock will create a 10×22-foot tapestry for the Museum’s restaurant, revisiting a backdrop that he created for the 2008 Ballet Austin production Cult of Color: Call to Color, titled Good Vegan Progression #5. That piece, layered with the artist’s part-fictional, part-autobiographical narratives, depicts brightly colored trees across an abstract field.

The other two commissions include a sculptural pool by Cristina Iglesias which will occupy the site immediately in front of the main entrance to the Kinder Building, and a dramatic dragon sculpture by Ai Weiwei, constructed of bamboo, aluminum, mirrors and silk, which will be suspended from the ceiling of the Glassell School above a drop-off atrium adjacent to the Eliasson tunnel.

The Steven Holl Architects-designed project, inaugurated in 2012 (both for the master plan of the campus and the Kinder Building) is dedicated to installations from the growing MFAH collection of 20th- and 21st-century art.

States Tinterow: “The Museum of Fine Arts, Houston, has, over the last dozen years, become one of this nation’s fastest-growing art museums in terms of collections, programs, and audience. For some eight years now, through our campus plan, we have been stepping up in every way to match the growth, diversity, and dynamism of our city. When we open the Nancy and Rich Kinder Building in fall 2020, we hope to welcome the entire world to an expansive, beautifully designed complex of buildings and urban gardens, revealing the previously unsuspected riches of an international collection we could never before exhibit in such range and depth.”

Says architect Steven Holl: “All buildings on the campus are in conversation with each other, with the lush Houston landscape as the connecting syntax. There’s a porosity to the buildings — whether in the alternating concrete and glass panels of the Glassell School, or the ground-floor transparency and perimeter garden insets of the Kinder Building — that creates a sense of interchange between indoors and out.”

The project’s landscape architect, Deborah Nevins, says: “Our goal in designing the landscape has been to create a universally accessible MFAH campus made possible by the master plan’s bold move of locating all parking underground to make way for green space and walkways. Whether people are relaxing in the shade of the new Brown Foundation, Inc. Plaza, strolling through Noguchi’s superb sculpture garden, or looking out over the city from the Glassell School’s roof terrace, the outdoor public spaces provide distinct perspectives on the campus while enabling everyone to experience the architects’ unifying vision.”

The Kinder Building is the final component of the plan as the third gallery building on the Sarofim Campus, joining the Museum’s original Caroline Wiess Law Building (designed in the 1920s by William Ward Watkin, with later extensions by Ludwig Mies van der Rohe) and the Audrey Jones Beck Building (designed by Rafael Moneo and opened in 2000).

Steven Holl Architects has designed the Kinder Building to stand in complementary contrast to these existing structures and to create a dialogue with Isamu Noguchi’s 1986 Cullen Sculpture Garden, which Holl’s gallery building fronts on one side.

Richard D. Kinder, Chairman of the MFAH Board of Trustees, says: “We are grateful to Steven Holl for his brilliant master plan and superb architecture, to the farsighted donors who gave us extraordinary endowment resources to build the collection, and to all the trustees and supporters who enabled us to achieve such an ambitious plan. Most of all, though, we thank the people of Houston, who make this institution their museum, day after day.”

The MFAH initiated its capital “Campaign for the Museum of Fine Arts, Houston” in January 2012, with a goal of $450 million, including funds for an operating endowment. The campaign has exceeded expectations, raising $472 million to date with nearly 100 percent of donations coming from within Houston, with principal gifts provided by Susan and Fayez S. Sarofim and the Kinder Foundation.

For more information about the MFAH and the Kinder Building, please go here.