The Unbearable Whiteness of Being: A Q&A with Lily Cox-Richard 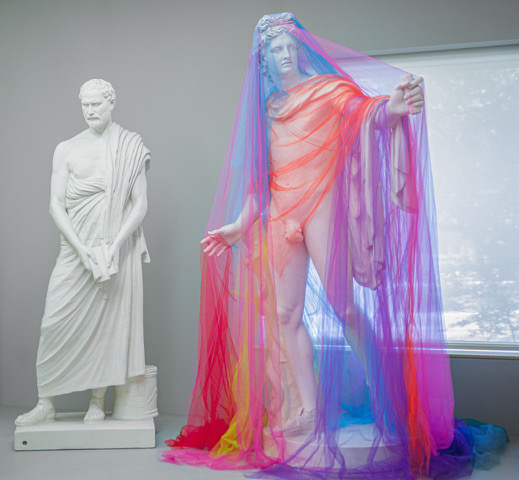 Lily Cox-Richard pays attention to details: fossils found in a sidewalk’s aggregate or subtle seams on a reproduced sculpture. Look closely and you’ll spot both in her solo show, She-Wolf + Lower Figs., on view now at the Blanton Museum of Art. By examining what is so often overlooked, the 40-year old artist exposes what is often most deeply embedded — historically, culturally, even geologically.

Using 3D scans, rabbit-skin glue, and rainbow tulle, Cox-Richard has reimagined depictions of classical Greco-Roman mythology, shedding light on the pervasive cultural assumptions and narratives which perpetuate our social hierarchies. In particular, she has turned to the Blanton’s William J. Battle Cast Collection, one of the few remaining sets of such 19th century copies of Greek and Roman sculptures in the U.S., to examine how their whiteness — a byproduct of plaster — has affected our Western perception of classical perfection.

A native of Virginia who now resides in Richmond, Cox-Richard lived on and off in Houston for some years. Both cities, she explains, have interesting but complicated histories, prompting the many important questions — and details — contained in her most recent work.

Barbara Purcell: How is She-Wolf + Lower Figs. an extension of your solo show, Berm, last year at DiverseWorks in Houston?

Lily Cox-Richard: The sidewalk, specifically — though the concrete used in this exhibition is different. For DiverseWorks I made a piece called Callous, which was two cement slabs pushed up by ooze. I was thinking about different systems of infrastructure, both built and natural, how weather patterns or tree roots push up against each other, and how these systems must negotiate with each other. I also wanted to explore sidewalks as both public and private space — how we can have very intimate encounters on what is considered to be public space, but how sidewalks also link to private spaces such as homes.

I’m interested in the story exposed aggregate can tell, as something that is ubiquitous but also very specific to a region. You don’t trek gravel across the country, you use what’s locally available. Shells and bricks, for instance, and the kinds of information packed into the detail, literally embedded in these built environments: the interior spaces of objects. I was excited to see the Blanton’s Battle Cast Collection in storage. Many of the crates contain individual halves of plaster figures, which means you can peer inside to understand how they’re made. These are mass-produced pieces, but they have handprints and notes on their edges which expose the different systems of labor that went into making them. Whether it’s the cutaway makeup of the sidewalk’s aggregate or the interior spaces of these sculptures … most people don’t wonder what’s going on in there. 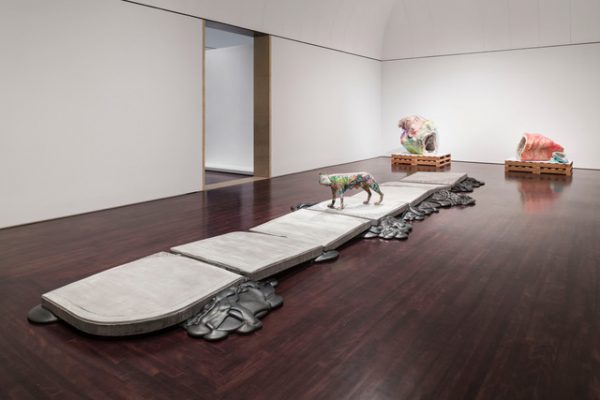 BP: And how is this new sidewalk unique to this particular show?

LCR: I observed a lot of people using the Blanton’s Contemporary Project gallery as a cut-through to other galleries on this floor, as if there’s an invisible path that goes only one way. I wanted to make a path which functions to disrupt that original path. When I was in my studio, thinking about how people would need to walk around this sidewalk in order to cross through the space, I didn’t realize the irony: I also constantly had to move around it while making this installation. It felt like some form of punishment. 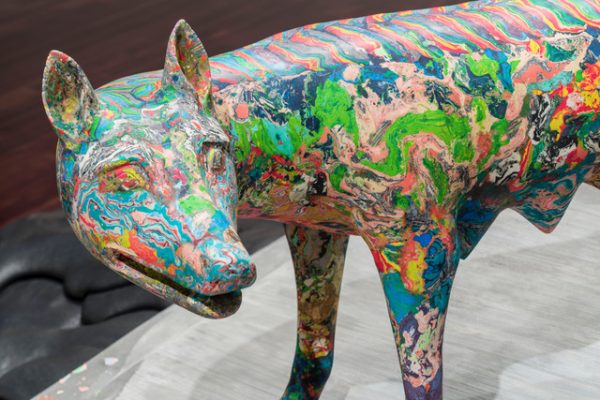 BP: Why did you choose the she-wolf as your centerpiece?

LCR: I was interested in the she-wolf as an iconic, and appropriated, mythological figure. She has functioned in different ways in different cultures, including Etruscan, Turkish, and Indian contexts. The she-wolf famously fed Romulus and Remus, the two orphan babies that went on to found Rome. I wanted to release her from having to feed those babies, free her up to have a different life. When I saw the white plaster she-wolf in the basement of the Blanton, on a platform, there were empty spaces for where Romulus and Remus would otherwise be. I was interested in their absence and wanted to showcase that.

The she-wolf stands in the middle of this sidewalk with pooling black puddles along the edges. These puddles invoke the work of artist Lynda Benglis; how they emerge from the ground and push things out of alignment may call to mind other feminist artists and activists. Thinking about the she-wolf specifically, these are volcanic eruptions and plumes, but in the context of Texas, these puddles could be a petroleum ooze, given their oil-slick sheen. I see this sidewalk ooze as a rupture in history, and having the she-wolf on this this laid-out grid, pushed up by these other factors and systems, serves to question our linear, clean narrative.

BP: Tell me about the process of making the she-wolf.

LCR: This is the first time I’ve worked with scagliola, which is an ancient Roman technique that uses plaster and rabbit-skin glue. It gives you a much longer working time than water: a couple of hours as opposed to 20 minutes. I kneaded this mixture like dough, layering different rolled-out colors into a loaf before slicing off parts and applying them like a collage. There’s a foam armature underneath that’s reinforced with steel, and the outer half inch is the plaster material. After several hours, a magical moment occurred, where the surface became dry and hard enough to file away and finish it. Basically building up a surface before carving it back down. But rather than carve a fur braid down her back, I wanted to use color and pattern instead of texture. This braid isn’t necessarily hair, more like hackles of fur, but when stylized it becomes braid-like, so the stylization of the she-wolf’s hair then connects to the hair and curls of the plaster casts in the Battle Collection.

BP: What is the significance of “lower figs.?”

LCR: When I first visited the collection in the basement, there was a crate which read, “lower fig.” because there were two parts to the figure. I started thinking about low hanging fruit, and the way figs and fig leafs relate to these classical pieces. I was also struck by the Osborne Seminar Room on the ground floor displaying mostly male figures from the Battle Collection, whereas most of the female figures were stored in the the basement. I started thinking about these “lower figs.” in terms of hierarchies, and their physical location underground.

BP: Why have you chosen to garb these two pieces?

LCR: Tulle is a light and floaty material which makes the figures more visible, but more ghostly at the same time. History haunts our museums, and spaces, and lives, and using a colorful material which exudes joy was a way to have a critical conversation about the whiteness of these plaster casts, or the presumed whiteness of the bodies that they represent. It’s a big challenge since conversations about white supremacy are not typically playful. We forget that these figures were originally painted in bright colors. There have been exhibitions to reimagine and render their original pigment, but people’s reactions lack awareness: they’ll use derogatory language, such as “garish” and “flamboyant” to describe it. We have culturally produced understandings of color and taste. 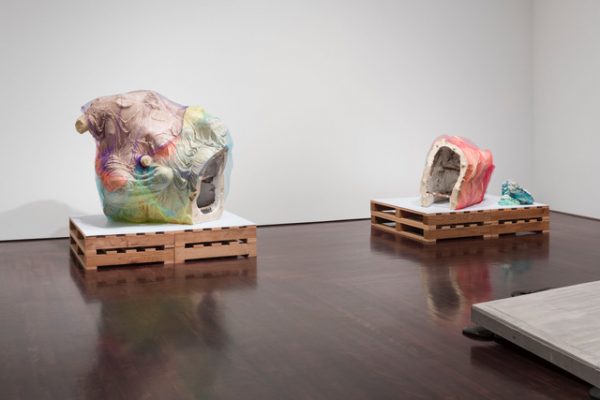 BP: How did you decide to work with 3D printers for this show?

LCR: Besides exploring the issues of whiteness that these plaster casts engage, there is also the question of copies. Parthenon pediments were once prized as copies, yet fell out of fashion because modernism is obsessed with the original. But these replicas have become interesting objects once again because there are way fewer of them. So what if we actually took copies seriously and repatriated all the original sculptures? Of course as an artist, I believe there is kind of power and energy in making objects. A copy doesn’t have the same aura as the original, but by dressing these replicas in colorful tulle, shrouding them to give a little assist, an aura has been made.

3D scanning and printing are contemporary technologies, but they are similar to a 19th century method known as the pointing system, where you would mark points on the surface of a form in order to translate it into another material — like a plaster model into marble — by using different calipers to triangulate and measure the distance between those points. 3D scanning makes the same mesh of triangles over something. The tools and technologies are different, but the approach is the same.

I’m also interested in how 3D printing/scanning, mold making, and casting creates distance between the new object and its original. There are layers of information as new details accumulate. You can see the thin lines on the she-wolf, for instance, where pieces of the mold came together, so we’re acquiring information about mold making while losing information about marble carving. I don’t think of this as old or new, digital or analog, but as different tools and technologies that deliver different results.

BP: Does Stonewall’s 50th anniversary play into your choice of rainbow tulle?

LCR: I think the connection between color and queerness and the history of camp is very important. This is a critical moment to remember that our celebratory Pride parades commemorate riots incited by police brutality: color isn’t just fun, it signals urgency. Also, I’ve chosen two female figures, Dione and Aphrodite, and a female wolf for this show: goddess-mother roles which have been shifted with chromatics to celebrate what is possible in color. 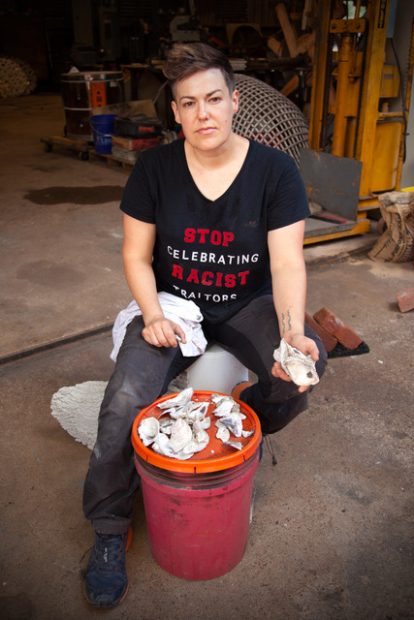 BP: Does our country’s current political climate have a role in this exhibition?

LCR: Yes, I was specifically thinking about the role of sparkly white marble in neoclassical sculpture, and I wanted to use plaster specifically because it isn’t marble — but its whiteness is still important. Since Trump’s election I’ve wanted to make work that is explicitly anti-racist and feminist, but to do so responsibly and not speak for others. These plaster casts have been used throughout a racist history, often as learning tools, and they perpetuate systems of oppression. I don’t think it’s fair to ask artists of color to do all the work in dismantling those systems.

BP: Is there any way to “ungrain” ingrained perceptions of Western white perfection?

LCR: We need to have conversations about why some kinds of color are considered garish or tacky, and think about how we’ve equated whiteness with perfection. But also neutrality: we are in a white gallery space right now because we pretend that whiteness is inherently tasteful. I draped one of the Battle Casts, Apollo Belvedere, in a ground-floor study room which is filled with mostly white male plaster figures. Just by doing that, it adds a new layer and a different way of understanding these figures; it creates more possibility and helps to loosen these culturally embedded notions.

I was excited to intervene in the Osborne Seminar Room, which draws a very different audience and serves a different function than the Contemporary Gallery upstairs. When I first entered the ground-floor space, I was surprised by how the Battle Casts were displayed on almost a catwalk — but in a typical-looking conference room! I was hoping to dress all of the figures in the Osborne Room, but some of them are very fragile, and I think important things can be learned by having just one dressed. Draping this one figure, in a study room filled with many plaster figures, became a proposition: a way to rethink how we teach the canon, which is a very specific part to a much broader and diverse art history that we could potentially be teaching.

There will be an artist talk and conversation with Lily Cox-Richard at the Blanton on Oct. 18. ‘She-Wolf + Lower Figs.’ is on view at the Blanton Museum of Art, Austin, through Dec. 29.