Letters To Goya: A Book and Performance by James Magee 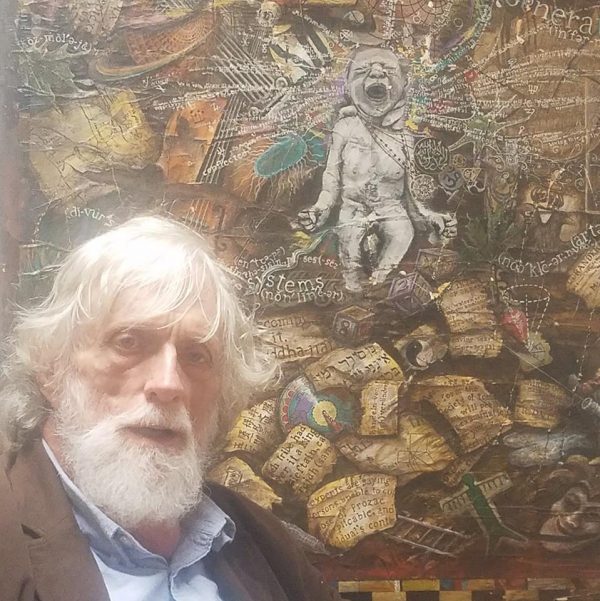 Richard Brettell has famously written that James Magee may be “America’s greatest living unknown artist.” One might assume the comment to be at least somewhat tongue-in-cheek, for Magee has been discriminatingly ubiquitous for decades. You can see him musing rhapsodically about steel as sculptural element here, on the occasion of a stellar 2010 Nasher Sculpture Center exhibition. Perhaps equally lauded, the painter Annabel Livermore lives and works mysteriously within the realm of Magee’s psyche and mortal equipment. Her work may in fact have been presented before more eyeballs than that of her host entity.

One of Livermore’s paintings, Chillicothe Lady, adorns one of the front covers of Magee’s new collection of singular verse, Letters to Goya – Poems, Titles and Letters to the Dead. Published by Cinco Puntos Press of El Paso, where Magee has been based since 1981, the handsome volume proceeds from both its front front cover and its back front cover with dual avenues of poetic exploration that meet in the interior, where Kerry Doyle, director of UTEP’s Rubin Center for the Visual Arts, contributes an illuminative MIDDLEWORD. 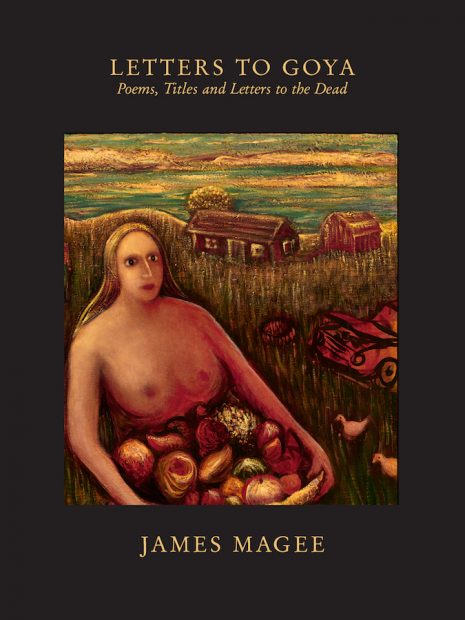 This Saturday, October 5, Magee and his partner, the actress and playwright Camilla Carr (All About Bette: An Interlude with Bette Davis), will present a staged reading of the book at the Crowley Theater in Marfa. The 23 typewritten letterpoems, dated 1955 and addressed variously to Frank, Francisco, or Goya, are reproduced in the Cinco Puntos volume on sheets of paper that have acquired the rich, aleatory resonance one would expect from leaves of half-century-old cellulose pulp. The personal missives composed to the late 18th– and early 19th-century Spanish painter and printmaker Francisco José de Goya y Lucientes  are all signed by “The Duchess,” or María del Pilar Teresa Cayetana de Silva Alvarez de Toledo, the 13th Duchess of Alba, with whom the artist may or may not have been romantically involved.

At the time of her writing, 1955, The Duchess was living in the Waikiki Trailer Park in Sweetwater, Texas. (Magee actually typed the letters in 1995, after visiting Sweetwater, where a former oil well co-worker lived, and spending days in the local public library perusing 1955 Sweetwater newspapers to glean Sweetwaterana.) The letters speak of going to the Sky Room at the Blue Bonnet Hotel, rain, tornados, “flying saucer talk,” Sears bath mats on sale for $1, treating headaches with 30 seconds of an air hose applied to one’s ear at 90 psi, Marlon Brando in The Wild One at the Rocket Drive-in, wearing three dresses at the same time, births and deaths, and “mixer-upper dreams.” When The Duchess types about Clark Gable having cheated on his former wife “before he married that floozy, Kay Williams,” she admonishes Goya, “so you better not be cheating on me, Frankie.” In another letter she muses about falling into “your arms again, Goya, how that would calm my nerves… .” And then from the husk of these quirks and everyday concerns, The Duchess segues into the marvelous reporting on the sensation of beauty that suddenly floods in when she smells freshly cut grass or takes her shoes off after a thunderstorm. “I know every shred of life foretells the future, like the way the wallpaper is peeling from my bedroom ceiling is a sign, if only I could figure it out.” Camilla Carr originally hails from Chillicothe, Texas, a couple of hours from Sweetwater, so her accent for the Nolan County Duchess is right there and not over-broadly rendered as small-town Texas characterizations can so often be. 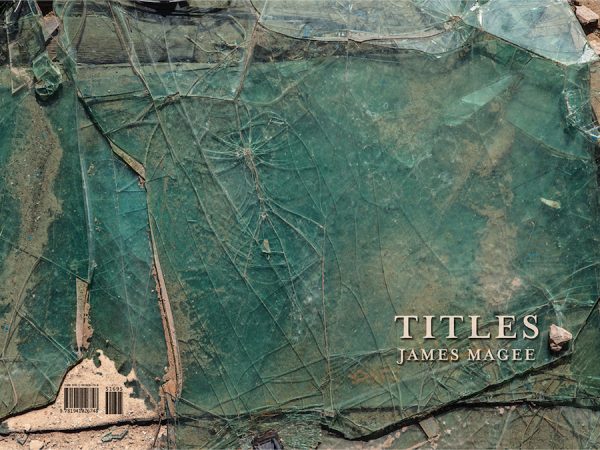 When I first read, in a 2008 Granta article, about Magee’s oral performances of the whole-poem-titles of his works of sculpture, often delivered while standing behind an audience of one or two as the hearer gazes upon the artwork, I thought the experience might perhaps be, I don’t know, a little creepy. But after watching video of his spoken-word performance, I see his delivery as elegant and wise. Though abstract, the Titles, which Magee describes as “miniature dramas,” consist of stories and scenes with just enough context of setting and action that we feel more receptive when the poet-artist interjects the hard and soft stuff… ‘night falls evenly on all living forms’ … ‘Morley believes each of us is only a variation on the same theme, a viral dilapidation of a vaccination stuck into the arm of a giant millions of years ago’ … ‘Truth is no matter where ya move to people will get up and die on ya’ … “‘Yes, shadows can be healing, but watch your step, boy,’ Dad would say, ‘or the world will break you in two.'”

James Magee and Camilla Carr perform ‘Letters to Goya – Poems, Titles and Letters to the Dead’ at the Crowley Theater in Marfa, 7:30 p.m., October 5. Presented by Marfa Live Arts and the Marfa Book Company. The performance will be repeated October 19 at Bookworks in Albuquerque, NM, and November 22 at the Poetry Project at St. Mark’s in New York.

Goya, of course, has proven inspiring to and has been invoked by a number of contemporary poets. Lawrence Ferlinghetti, in his book A Coney Island of the Mind, begins one poem, “In Goya’s greatest scenes we seem to see the people of the world exactly at the moment when they first attained the title of ‘suffering humanity.’” And in his poem For the Death of 100 Whales, which he read at the famous Six Gallery reading in San Francisco on October 7, 1955, Michael McClure inserts a parenthetical exclamation, “(Goya!!)”, amidst his lamentation of the sad and terrible scene.

Terry Allen once commented something along the lines of how, in many ways, El Paso is the most intriguing city in Texas. I concur. If you’d like to know more about El Paso, I highly recommend the Cinco Puntos book, Ringside Seat to a Revolution – An Underground Cultural History of El Paso and Juarez, 1893-1923 by David Dorado Romo.