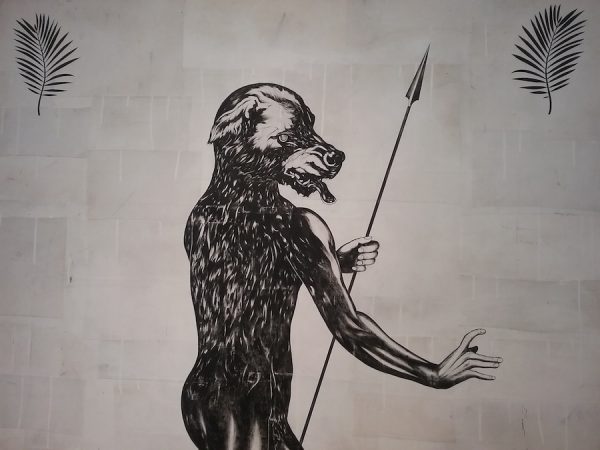 Detail of a 2019 work by Matt Messinger, on view at Devin Borden Gallery, Houston

I first saw Matt Messinger’s work in 2010. They were paintings of classic animated cartoon characters: early Disney; Fleischer Brothers characters (like Popeye), etc. What kept these paintings from being mere pop art had to do with his surfaces; underneath the black-and-white images was a distressed canvas. It gave his paintings a rough-hewn feeling. It reminded me of something that Robert Crumb said when describing early comic strips — that when looking at them you could smell the boiled cabbage of the tenements. Messinger’s paintings weren’t just ironic depictions of antique popular culture. Instead they felt like actual relics of the era they depicted.

His work has evolved quite a bit since then, and is currently on view at Devin Borden Gallery in Houston.

Robert Boyd: Can I get a little background about you, Matt?

Matt Messinger: I was born in Houston, Texas, and grew up in southwest Alief. I became interested in making art at about age eight. My brother and friends and I would have drawing competitions [for] who could draw the best comic book characters. I usually lost, but this was one of my favorite playtime activities. 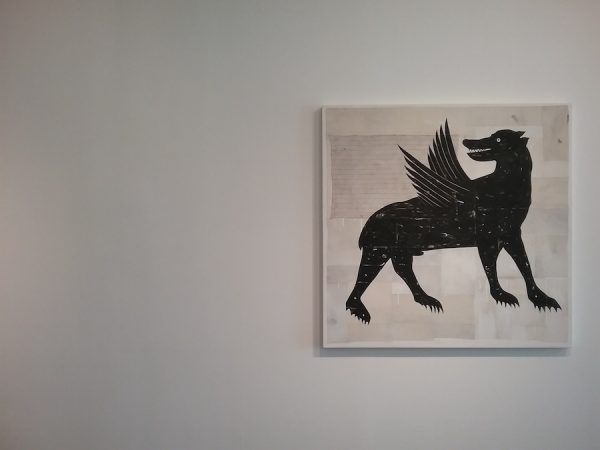 During the summer of 4th grade, my mom enrolled me into a summer program at the Glassell School. I was able to explore collage and paper mache. This furthered my interest in mixed media, learning that art could be made of anything and that rules did not always apply to artwork.  I became very interested in graphic design. I went on to study graphic design at the Art Institute of Houston. This shaped the way I look at composition and what is meaningful and what is not. I was most impacted by pictograms and graphic symbolism. A way of turning an image into an icon or logo. 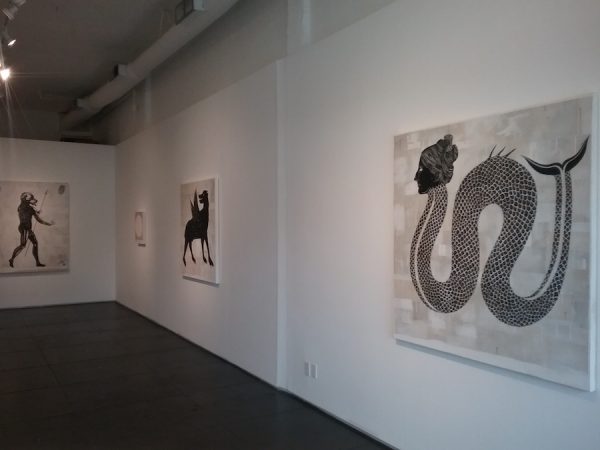 RB: I know you primarily as a painter, but I know you’ve done some printmaking and sculpture. Do you consider yourself a painter? 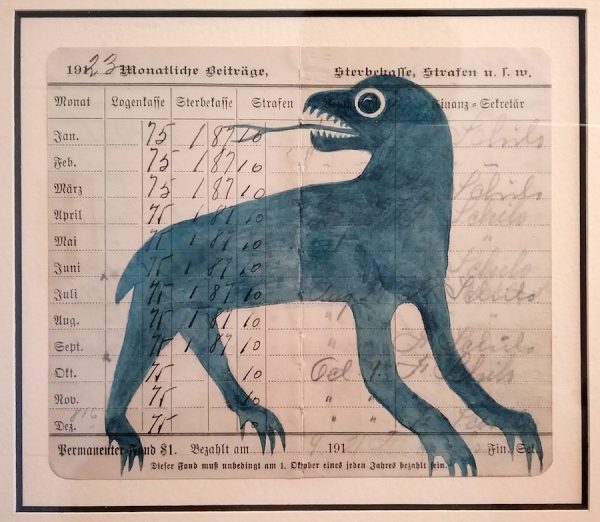 RB: A lot of your paintings are on white backgrounds that seem somewhat distressed, blotchy, etc. Some have bits of writing in pencil.

MM: The backgrounds of my paintings are primarily collaged fabrics that I’ve dyed, painted, and scribbled on. Sometimes the scribbles are personal to me. Other times they are just words or ideas that come to mind as I’m working. And then, sometimes, the writing can be original, from a turn-of-the-century report card of a student in Galveston, to a 1950s handwritten recipe.

RB: I first saw your work back in 2010 in a weird hybrid art/car exhibit at CityCentre, a shopping center out near the West Loop and I10 [Houston]. You were exhibiting these Fleischer Brothers-style animated figures painted on white. I’ve seen a lot of these old-timey cartoon subjects in your art. Can you tell me a little about them? What do they mean to you?

MM: I left a corporate job in graphic design to pursue making art in 2009. I think destroying the cartoon subjects and logos was a part of rebellion from graphic design, and capturing a piece of nostalgia and innocence at the same time. It was earlier in my career that these things made it into my work. It was an easy to go-to subject at the time. My son was very young and he could relate to them. I would often encourage him to scribble on these paintings. Many of these paintings have tornadoes and vampire teeth my son Matthew drew on them at around age four. 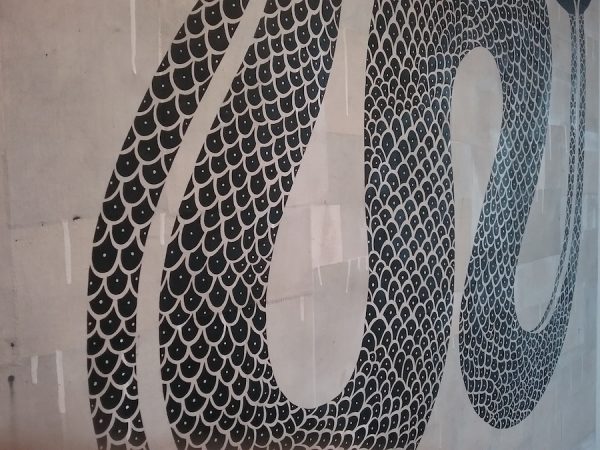 RB: In your graphic arts job, did you work in publishing or for an advertising firm? What made you want to leave?

MM: I worked for a large corporate design company doing mainly print projects on paper. It was really good experience, but I knew it was not what I was passionate about. All of my spare time outside of work was spent on creating and experimenting with fine art until I decided to take the plunge and do it full-time.

RB: You’ve done a bunch of images of a sperm whale. Sometimes black but sometimes white, like Moby-Dick. The ones I’ve seen are all in profile. What is the sperm whale to you?

MM: The sperm whale, to me, is a terrifying creature. A huge beast with sharp teeth hiding beneath the surface that makes you feel tiny.

RB: In your latest show, Bestiary [on view at Devin Borden], you have paintings mostly of mythical or folkloric animals. Why did these subjects interest you?

MM: I am interested in zoology, and also antiquity style imagery, so I combined the two subjects to create something that fascinates me.

RB: I notice that they are generally drawn in black and white — almost silhouettes.

MM: I feel like the images are impactful in black and white. The beasts almost become a logo or an icon. From my education in graphic design I was taught that a good design works well if it can be reduced to just one color. I also like how a profile becomes flat in a single color. 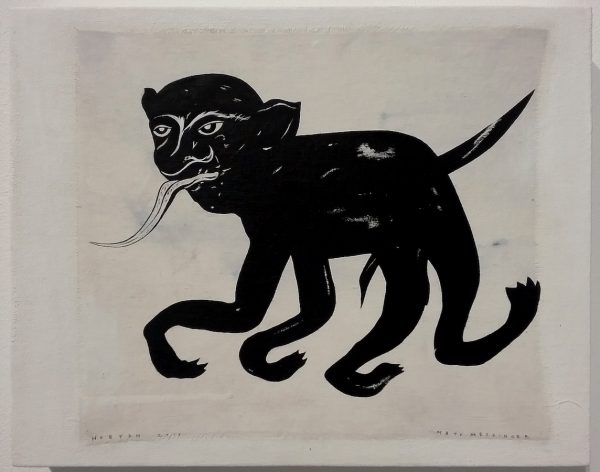 RB: I had never heard of a Hobyah. Can you talk about it?

MM: As a young child my son was really into scary bedtime stories. I made up lots of ghost stories to tell him as he would fall asleep. I started to run out of tales so I would research old folklore. The Hobyah was an old story about a dog that barks to warn his family about a threat. The dog ends up getting cut apart by the man of the house for barking too much. The family was carried away and devoured by the Hobyahs. My Hobyah was drawn much different from the folklore version. I made him more human-like, but put him on all fours as a quadruped with the joints in his legs backwards.

RB: Ten years later, I assume you don’t still read to him. How does he feel about your work now? Does he like your use of mythological creatures? (I know when I was 14, I would have found them cool, but I hardly have my finger on the pulse of young people today!)

MM: We talk more about current events and history these days. He’s kind of a history buff. He likes my work, but he is kind of used to seeing it. He is extremely supportive of what I do and has occasionally claimed artwork for himself. So, I don’t get the initial impact from him that I get from other kids his age. 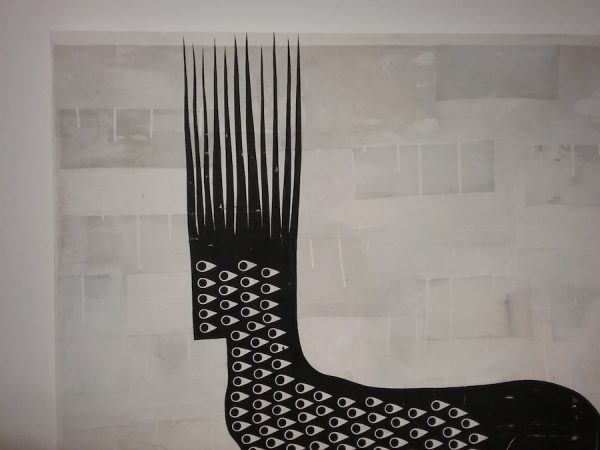 RB: Argus is usually depicted as a giant with eyes. You’ve made it a hoofed animal, like a deer with eyes all over its body. Why the change from the well-known myth?

MM: I wanted to get away from traditional versions in mythology. My Argus has a deer body and a human head with roots shooting out of it. My Cerberus has seven heads instead of three. My version of Echidna has no arms. My Chupacabra is more of a lizard than a dog. Bestiaries were popular in the Middle Ages in illustrated books that described various animals. The descriptions and drawings were often inaccurate and even combined animals. 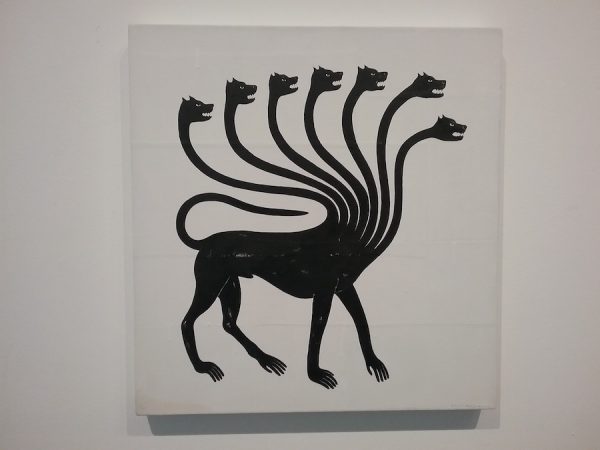 RB: Several of your recent paintings are chimera: Echidna, Dog Man. Is there a particular fascination with hybrid human/animals?

MM: I have always loved fantasy. I create images of things I want to see — or do not want to see. Like my son, I love creepy tales. Maybe they are paintings for my son in the same way I told him bedtime stories. 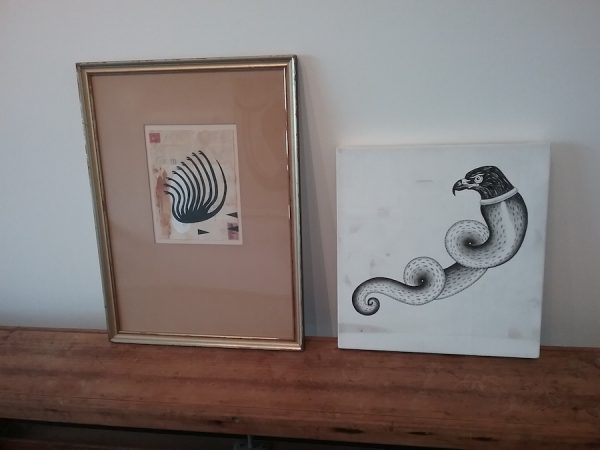 RB: The show includes several color pieces, but they are all small. Why are your large works monochromatic but your small pieces colored?

MM: The larger paintings that are monochromatic are done in oil, and the smaller drawings are done in watercolor. The materials usually dictate how I use them. I enjoy using black oil paint with a small amount of paint and dry brushing for shadow. Areas untouched form negative space. The uneven surfaces of the larger black-and-white paintings pick up more paint to get an almost block-printed look or a hint of misprint.

Watercolor seems like a smaller surface medium to me. I have several large works at my workplace, at Hardy & Nance Studios, that have introduced more color. They are usually more abstract images. I like the weight of color from watercolor, but sometimes a color in oil can be to heavy for what I’m going for.

RB: I want to ask briefly about your sculptures. The ones I have seen are made of little ceramic knick-knacks with various colored buttons stacked on them. The buttons seem to be coated with resin (or something clear like that). And they are pretty tiny — table-top size. Can you talk about the sculptures a little?

MM: The sculptures started about 10 years back when I was a part of a group show with the Art Guys. It was a garage sale-themed show. I wanted to make stand-alone objects that were small, affordable and easy to transport. I was experimenting with lots of nostalgic materials like salt and pepper shakers and small toys. From this series came the clouds made from stacking army men together and dumping paint and resin over them. The button stacks combined porcelain animals with buttons stacked up on their heads and coated in resin. I still enjoy making these guys.

Matt Messinger’s ‘Bestiary’ is on view at Devin Borden Gallery, Houston, though Oct. 5, 2019.

The Big Show’s big awards: a grand each...

Great show Matt! Thanks Robert for putting together this interview & the insights therein.