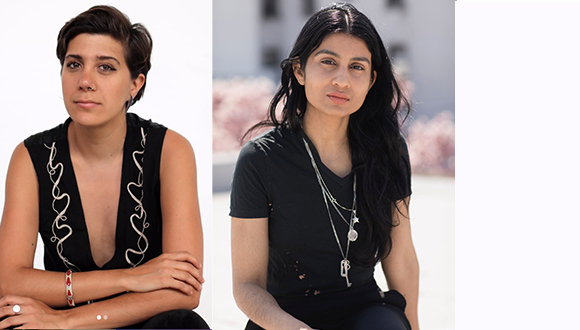 Five artists with ties to Texas are among the 25 winners of the 2019 Joan Mitchell Foundation Grant, which has been awarded annually to painters and sculptors since 1993.

Three University of North Texas alumnae, Morehshin Allahyari (M.F.A. 2012), and Baseera Khan (B.F.A. 2005), are among the 25 national artists selected for the Grant, along with Anila Quayyum Agha (M.F.A. 2004), a Pakistani-American artist who currently lives and works in Indianapolis.  The award, in the amount of $25,000 to each artist, is an unrestricted prize given each year, and also makes awardees eligible for residencies at the Joan Mitchell Center in New Orleans. Allahyari is best-known for her 2016 project Material Speculation: ISIS, in which she created a series of 3D-printed sculptural reconstructions of ancient artifacts destroyed by ISIS.

When reached about her award, Khan responded in an email to Glasstire: “It feels like reparations a bit getting an award this prestigious. I ask myself why did I get it and do I deserve it, but I think that is historical trauma poking at my backside. I pretty much cried on the phone when the foundation called me… . I was going to hang up on my angel, all the Joan Mitchell Foundation was trying to say to me was – ‘hey, we see you, we have your back.'”

Also awarded the prize are Houstonians Jamal Cyrus, a University of Houston graduate (B.F.A. 2004), and Gabriel Martinez, former CORE Fellow and artist-in-residence at Project Row Houses. Cyrus was a 2010 Artpace San Antonio resident artist, and Martinez is founder of Alabama Song, an arts space in Houston that focuses on experimentation, both in the production of new work and its distribution.

In a statement posted to her Instagram account, Allahyari expressed her surprise about receiving the honor. She writes: “Coming from a social science/media studies background (which is what I studied for my undergrad in Iran) and then studying New Media Art for grad school, never ever in my life [did I think] my weird practice between digital and physical would be recognized by a prestigious grant for sculptors.”

For a complete list of 2019 grantees, and to learn more about the Joan Mitchell Foundation, visit its website here.

Via the Joan Mitchell Foundation:

“The Painters & Sculptors Grants are a cornerstone of our work at the Foundation. The program fills what we see as an ongoing gap in arts philanthropy—the scarcity of direct support to artists for them to continue their practices, to try new things, and to take risks. While the art market is strong, and public sentiment about ‘art’ remains enthusiastic, the opportunities for financial support for artists themselves continue to be limited,” said Christa Blatchford, CEO of the Joan Mitchell Foundation. “We know, from talking to and working with artists for more than two decades, that providing unrestricted funding is necessary and essential. With artist Joan Mitchell’s foresight to establish this Foundation in her will, we are able to serve the needs and amplify the visions of artists. We are delighted to welcome the 2019 grant recipients to our community and look forward to seeing how their work continues to flourish and enrich the lives and experiences of others.”

Note: this post has been updated to included Anila Quayyum Agha, another artist with Texas ties to win the Joan Mitchell Foundation Prize. We also reached artist Baseera Khan, who relayed to us her reaction to news of receiving the prize.

Heads Up, Emerging Artists of All Ages: Joan...