Charles White, General Moses and Sojourner (Harriet Tubman and Sojourner Truth), 1954. Wolff carbon pencil and white chalk over traces of graphite pencil with scratching out, blending, and charcoal wash splatter, 27 7/8 in. x 38 in. Gift of Susan G. and Edmund W. Gordon to the Units of Black Studies and the Blanton Museum of Art at the University of Texas at Austin.

Two exhibitions featuring the work of artist Charles White (1918- 1979) have opened recently at the Blanton Museum of Art and at the Art Galleries at Black Studies (AGBS), both of the University of Texas at Austin. Charles White: Celebrating the Gordon Gift,  at the Blanton, is on view September 7 – December 1, 2019. The other exhibition, Charles White and the Legacy of the Figure: Celebrating the Gordon Gift, opened on August 28 at AGBS, and will close on November 30 of this year. Both exhibitions are accompanied by a catalogue published by Tower Books, an imprint of UT Press.

A large gift of White’s works, including 23 drawings and prints as well as a rare large-scale painting, was a donation from Drs. Susan G. and Edmund W. Gordon in 2014, and is stewarded by UT’s Unit of Black Studies and the Blanton. States Veronica Roberts, Blanton Curator of Modern & Contemporary Art (and co-curator of the Blanton exhibition): “UT is a fitting home for these works and exhibitions given both White’s and the Gordons’ shared commitment to education. White believed that education is crucial to fostering a more just society and taught at numerous institutions throughout his career. We’re honored to celebrate his legacy through these exhibitions on campus.” 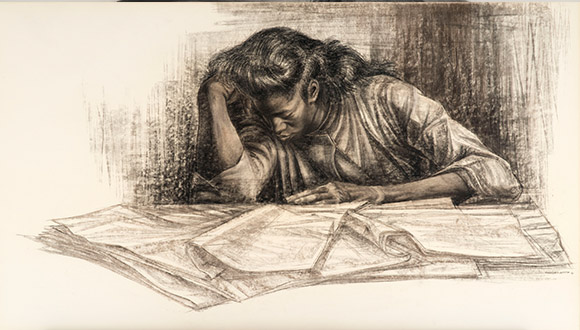 Charles White, Awaken from the Unknowing, 1961. Compressed charcoal and brown and gray vine charcoal with scratching out, blending, and erasing on cold-pressed illustration board, 32 1/4 x 57 1/4 x 1 3/4 in. Gift of Susan G. and Edmund W. Gordon to the Units of Black Studies and the Blanton Museum of Art at The University of Texas at Austin.

Some of the visual themes that emerge from White’s art in Charles White and the Legacy of the Figure consider how early in life struggles begin for White’s subjects. Other artists’ work in the show supports this theme. Deborah Roberts’ Stinney (Nessum Dorma) (2019), a contemplation of childhood for African Americans, and Elizabeth Catlett’s exploration of the innocence of the black child in For the boys and girls who grew up in spite of these things… (1992) are two examples. The Figure show also features works by Robert Pruitt, Henry Taylor, Kara Walker, Belkis Ayón, and (White’s former student) Kerry James Marshall. Charles White and the Legacy of the Figure examines how representing the human body allows artists to meditate on formal and political concerns.

Says Blanton Director Simone Wicha: “The University is proud to display works by one of the most accomplished draftsmen and influential arts educators of the 20th century. White’s strikingly rendered images of both heroic and everyday Black figures imbued with power and dignity are sure to provide inspiration and resonate with both the audiences we welcome and the students we teach here at the university.”

The Blanton exhibition is divided into three sections. The section “Social Realism” includes works by White and other artists like Harry Sternberg, Fletcher Martin, and John Biggers, who exposed pressing economic and social issues of the 1930s and 1940s. White’s drawing Can A Negro Study Law in Texas (1946) portrays Heman Sweatt, a plaintiff in the Supreme Court case to integrate the law school at The University of Texas at Austin, and is included in this section.

The second section focuses on heroic figures like Sojourner Truth and Harriet Tubman, as well as idealized Black women by leading Mexican modernists involved in the anti-fascist movement. Also included in this section are color lithographs by White, such as Love Letter III (1977) and Prophet II (1975).

The last section in the Blanton show is titled “Black Lives Matter,” and frames White as an advocate for Black history and social equality. It features two large-scale drawings from White’s iconic Wanted Poster Series, based on runaway slave posters and advertisements for slave auctions.

Dr. Cherise Smith, Chair of the African and African Diaspora Studies (AADS) Department, curator, and the founding Executive Director of the Art Galleries at Black Studies, states: “It is Black Studies’ honor to celebrate Drs. Susan and Edmund Gordon, whose donation made The University of Texas at Austin a crucial destination to research Charles White, African American art, and social realism. Lifelong friends, the Whites and Gordons were dedicated to advocating for children, education, and equity for Black people. We hope visitors will take home a new-found appreciation of White’s significant contribution to 20th-century art.”

There will be an artist talk about the work of Charles White by Deborah Roberts and Robert A. Pruitt on Thursday, October 8 at 6:30 p.m., moderated by Dr. Smith

For more information on the exhibitions, please go here.