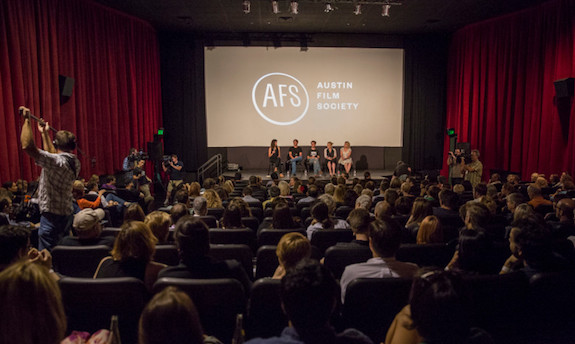 Austin Film Society (AFS) has announced its 2019 grant recipients; there are 12 recipients for the fall funding cycle. The AFS Grant, launched in 1996, is an annual production fund for emerging Texas filmmakers. The grants, which total around $100K, are received by grantees as a combination of cash and in-kind grants from AFS partners.

Via AFS: “This year’s projects reflect the Austin Film Society’s commitment to funding exceptional artistic voices that often come from backgrounds traditionally under-represented in the film industry. Female-identifying filmmakers made up 50% of this funding cycle’s recipients, and received 66% of funds. 42% of the 2019 recipients identify with a community of color. 42% of this year’s recipients were first-time grantees of the Austin Film Society.”

Below are the filmmakers and projects that have received AFS 2019 grants, via AFS:

North Texas Pioneer Film Grant
HURDLE
Documentary Feature in distribution
Director: Michael Rowley
Hurdle is the story of a new generation of Palestinians using creativity as a form of resistance. Where walls were built to contain and control, Hurdle’s characters lack freedom of movement. Through the sport of parkour and the documentation of daily life, the characters tell an untold story of what it means to strive for freedom in the modern era.

Stuck On On Award
INBETWEEN GIRL
Narrative Feature in post-production
Director and writer: Mei Makino
Teenager Angie Chen finds herself in a cultural and personal identity crisis following her parents’ recent divorce. Caught between her equal-parts Chinese and American upbringing, life is only further complicated when she begins a romance with Liam, a popular jock who wants to keep their relationship a secret. As Angie contends with her burgeoning sexuality, she must face a troubled home life, a confusing romantic relationship, and a growing sense of isolation as she is left alone to determine the ultimate question: Who is the real Angie Chen?

North Texas Pioneer Film Grant
MARTINEZ
Narrative Feature in production
Director and writer: Maria Padilla
Martinez, a cranky and lonely bureaucrat resisting retirement, receives a surprise gift from a deceased neighbor. He finally begins to enjoy life through a love affair with her through her old belongings.

Warbach Lighting and Design New Texas Voices Grant
MISS JUNETEENTH
Narrative Feature in post-production
Director: Channing Godfrey Peoples
Centered around the Juneteenth holiday (commemorating the day slaves in Texas were freed – two long years after everybody else), Miss Juneteenth tells the story of Turquoise, a former beauty queen turned hard-working single mother, as she prepares her rebellious teenage daughter for the pageant, hoping to keep her from repeating her same mistakes. The Warbach Lighting and Design New Texas Voices Grant is a $10,000 cash grant for a filmmaker identifying with a community of color who is making his or her first feature length film.

Kodak Motion Picture Film Award
NAMES IN THE PAVEMENT
Documentary Feature in production
Director: Jim Hickcox
Names in the Pavement is an unconventional documentary about infrastructure and the history of Austin, Texas.

Stuck On On Award
NAN
Documentary Feature in post-production
Director: Zuqiang Peng
Nan follows the last two years of a living situation in which the filmmaker’s uncle Nan shares an apartment with his parents, before the family of three separate and live in different homes. A reflection on time, aging, and the economies of care in contemporary China.

North Texas Pioneer Film Grant
PRAIRIE DOGS
Narrative Feature in production
Director and writer: Dex Decker
Two wayfaring strangers meet in a rest stop bathroom and learn over French fries that they have more in common than the road and need each other more than they’ll ever understand. Sometimes it’s the kindness of a complete stranger that changes the course of one’s life.

RAISING ANIYA
Documentary Feature in production
Director: John Fiege
A teenage African-American dancer in Houston must draw on her community and her own resilience when she sets out to choreograph a performance about her experience with Hurricane Harvey and environmental justice.

North Texas Pioneer Film Grant
THE UNKNOWN COUNTRY
Narrative Feature in post-production
Director and writer: Morrisa Maltz
An unexpected invitation from her estranged Lakota family sends a young woman on a winding road trip through the Midwest all the way down to the Texas-Mexico border. A doc-drama observational film that takes a look at one less-traveled part of America, the people who live there and the complexity of a Native woman traveling alone in the current cultural climate.

MPS Camera and Lighting Award
WE REAL COOL
Narrative Feature in production
Director: Ryan Darbonne
Told over the course of one day, Austin’s first POC punk festival provides the backdrop for three intersecting stories featuring a failed musician searching for his lost van, two strangers on an awkward road trip, and a Mexican punk band on the verge of a complete breakdown.

WHEN WE WERE LIVE
Documentary Feature in post-production
Director: John Moore
When We Were Live is a feature documentary about the heyday of Public Access Television in the 1980s and 90s, and how it shaped the culture of a pre-internet America.

Harrison McClure Endowed Grant for an undergraduate filmmaker
FLYING IN THE DARK
Documentary Short in production
Director: Annika Horne
Why are we still surprised to see a woman pilot? Hear the stories of female pilots — their highs and lows — and see how they refused to be shut out of the skies, from World War II to the present.

Via AFS: “The AFS Grant has awarded over $1.97 million in cash grants to Texas filmmakers, creating life-changing opportunities for artists working outside traditional industry centers, and facilitating their significant career leaps.”