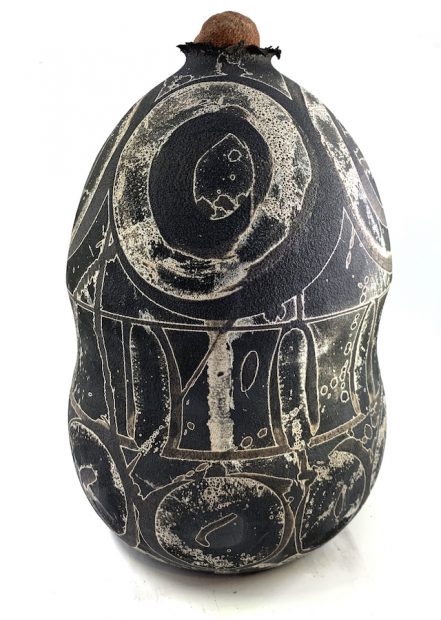 A raku-fired work by Greg Reuter.

As Hurricane Dorian approaches landfall on the continental United States, many Texans are still feeling the reverberations of trauma dealt by Hurricane Harvey two years after it hit. One artist thinking through the manifestations of this trauma is Rockport-based sculptor Greg Reuter. How does a natural disaster fundamentally change our idea of home? And how does that foundation, now compromised, relate to the ebb and flow of ephemera that washes itself upon the Gulf Coast? What does it mean to be an artist — and to persist — when everything is gone?

Fundamental Facets, Reuter’s solo exhibition opening at Rockport Center for the Arts on September 6, signifies for Reuter not only a return to his Rockport roots, but also a declaration — perhaps a memorial, maybe even a manifesto — on how creation continues, and how artists have found a way, and found solace, in the act of making.

Fundamental Facets is not just a survey of Reuter’s work. It also points to what’s next for Reuter, a man barely a year out of retirement as a professor of ceramics and sculpture at Texas A&M Corpus Christi for the past four decades. 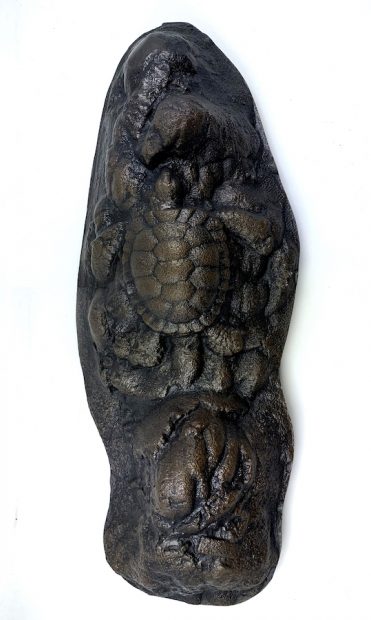 A metalwork piece by Greg Reuter

While Reuter may be heavily influenced by the natural surroundings of his coastal home, his work over the decades demonstrates an interweaving of different themes and media based off a variety of life experiences. His attachment to the beach extends back to his youth, growing up in the 1960s as a Southern California surfer. After earning his BFA from California College of Arts and Crafts, he left for Hawaii and studied sculpture and ceramics at the University of Hawaii, where he received his MFA. After that, he did a stint as a studio potter in both California and Washington before joining the faculty full time at Texas A&M Corpus Christi in 1978. 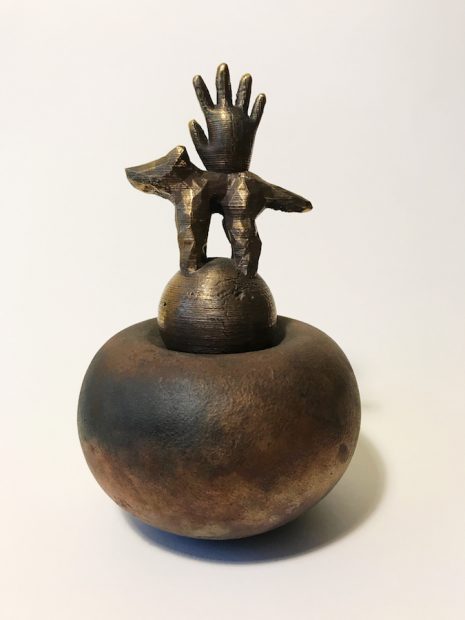 What this all means for Reuter is that while he is rooted in ceramics inspired by the Gulf Coast, his work has evolved over time, touching on found objects, religious imagery, and even veering into abstraction. His raku-fired ceramic vessels seem most emblematic of his time in Hawaii. Says Reuter about these pieces: “When creating these almost closed ceramic forms I intentionally left them unresolved and relied on sculpted, 3D printed, metal cast, and found object finials to finish the works. The shiny blue glazes, white sandy finishes, and volcanic black raw clay of these pots remind me of Hawaii’s coast where I researched my own raku firing methods.” 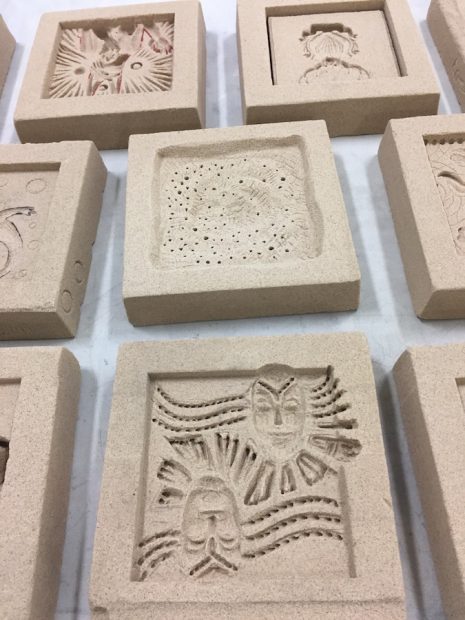 Some of Greg Reuter’s works in progress

So “returning to one’s roots” for Reuter means myriad influences inspired by his past in a handful of coastal places. The two pieces in Fundamental Facets that most signify a geographic returning are Monolith and Studio. In Monolith, Reuter functions as a glorified beachcomber, intuitively selecting textures and ephemera and then casting them in bronze. He sees this as a kind of preservation — objects (and ideas) that could read as insignificant, taxonomical, fleeting, historical, scientific, or journalistic are recast by Reuter as modern-day fossil forms. 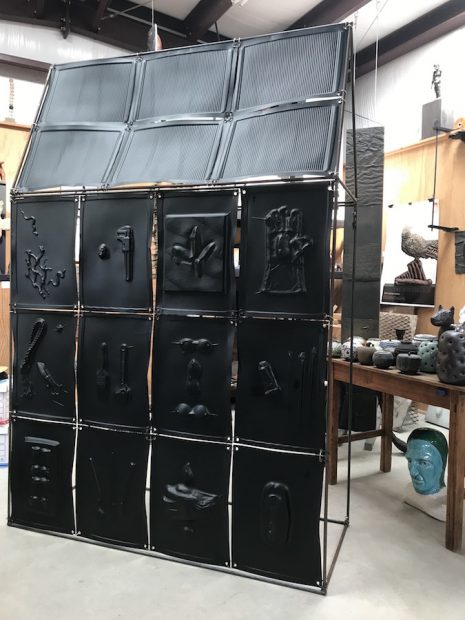 Studio evokes devastation post-Harvey. To create the piece, Reuter gathered the tools used by his artist friends and colleagues in the affected area and then asked them to arrange the items to their liking. He then vacuum-formed around the tools, thereby creating tiles strung together to construct the tenuous walls of a hollow house. In acknowledging loss, community, and perseverance, Reuter says of Studio: “The work speaks to the fragility of our built environment in the face of nature’s fury, specifically Hurricane Harvey. I spent the night of the hurricane protecting my studio from wind and water. While relieved that my studio avoided major damage, I soon found out that my neighboring artists in Rockport suffered devastating damages to their homes and studios. I felt their losses keenly, and Studio responds to the strength and perseverance of Rockport’s artists. By continuing to create work, Rockport artists prove that a studio is simply a space for working and ultimately an artist’s hands, tools, and vision are the forces behind creation. Even if the walls fall down, art will still be made.”

But is a studio simply a physical space? It’s an emotional and psychological one, too. Even when they dive back into creation post-trauma, artists and their art respond to feelings of loss. But history has proven the resilience and persistence of artists, and this time following Hurricane Harvey is no different.

The Rockport Center for the Arts understands this hardship of starting again, of returning to form. Its building was destroyed by Harvey. As Reuter’s artist community has forged a new path since then, so has RCA, as it reinvents itself with $5 million federal grant and the $4.5 million it had already raised to build a new campus, which is scheduled to open in 2021. Surely Reuter’s exhibition is a form of catharsis for RCA, as it operates in a kind of noble limbo, working out of a 2,200 square-foot building off S. Austin Street after its Victorian-style art center was destroyed by Harvey. This is where RCA has been exhibiting since the hurricane; they reopened these doors a mere three months after the storm. 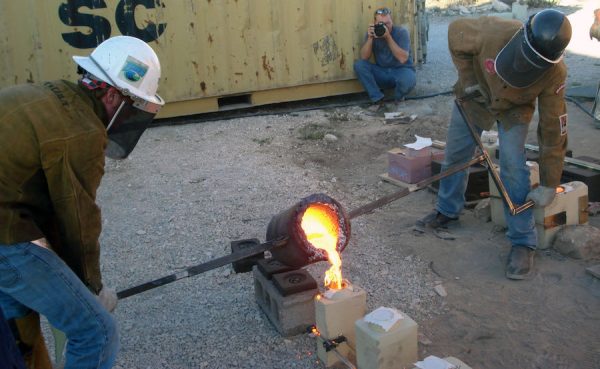 One of Greg Reuter’s iron pours in progress

So for both Reuter and RCA, Fundamental Facets is a kind of homecoming —  a way to honor and engage with an already tight-knit community that endured a painful and life-altering event.

Note: Reuter will further engage the public with an iron pour demonstration with three other artists on Saturday, September 14.

‘Fundamental Facets’ opens to the public on Friday, Sept. 6, and an opening reception will take place Saturday, Sept. 7 from 4-7 pm, with a gallery talk by Reuter starting at 4:30. The exhibition will be on view at Rockport Center for the Arts in Rockport, TX, until October 12, 2019.

A standing ovation for Greg Reuter!