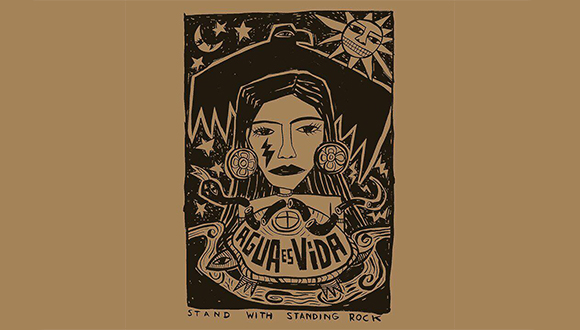 A print by Cruz Ortiz

From reddit to the San Antonio Current (which has two stories on the lawsuit and its responses to date) to a Go Fund Me account, San Antonio artist Cruz Ortiz is the subject of online conversation for his dispute with ¡Bucho!, a San Antonio pop-up concept restaurant from Durden Food Group (DFG, which takes its name from the Fight Club character Tyler Durden). At issue is a cease-and-desist letter sent by Cruz’s Lawyer to ¡Bucho! in July, according to Gilbert Garcia in a column for the San Antonio Express News on August 28. The letter states that ¡Bucho!’s logo could be “confusing and misleading” to people familiar with Cruz’s work, and implies that the restaurant’s logo infringes on Cruz’s work.

The logo in dispute, designed by Regina Morales

Glasstire reached out to ¡Bucho!, who released this statement via email (from Sohayla Hendrix of the DFG):

“On July 26th Cruz Ortiz’s Studio Director reached out to Durden Food Group Via email stating ‘We came across your instagram profile recently and noticed some of your designs are incredibly similar to our work. We were curious as to who designed this logo for you? As small business owners, we hope you understand our need to protect our artwork, we hope you can help.’

“I, Sohayla Hendrix, immediately contacted our graphic designer Regina Morales about their concerns. Both Regina and I replied to Ortiz’s Studio Directors in a prompt matter and then received no reply or follow up on the issue at hand. When Morales and DFG received no response, we thought the issue had been cleared up. On August 22nd we received the “cease and desist” letter stating the actions Mr. Ortiz plans to take. When commissioning Regina Morales to make the logo for ‘¡BUCHO! Tejano Street Fare’, we had no intention other than to represent our cuisine and the Tejano/Chicano culture in San Antonio… when presented the final draft we all felt like the logo served that justice.

“[sic] local artist and ‘community activist’ Cruz Ortiz accused ¡BUCHO! of using this style of art to ‘confuse and mislead’ our clientele into believing that this was his art and he somehow owned the rights to the Chicano art form. Professionally speaking, we understand the idea of protecting something that you hold close to the heart but, when we spoke to his attorney, John Bustamante (based in Austin,TX) and tried to explain that the inspiration for our logo came from the1960s and 1970s Chicano art movement posters, we were quickly told, ‘that was not true’.

“John Bustamante went on to say that ‘Mr. Ortiz has established himself for decades with this style of Chicano Art’ and was somehow ‘the Curator of this art form’. We at ¡BUCHO! believe that making this claim to the Chicano art form is not only arrogant but insulting to everything the Chicano Movement stands for. In order to insure that there would be no further confusion we contacted our artist Regina Morales and had her watermark her work. We at ¡BUCHO! hope that Mr. Ortiz can see we are all on the same team in trying to hold strong and represent the Tejano/Chicano pride and movement here in San Antonio.” 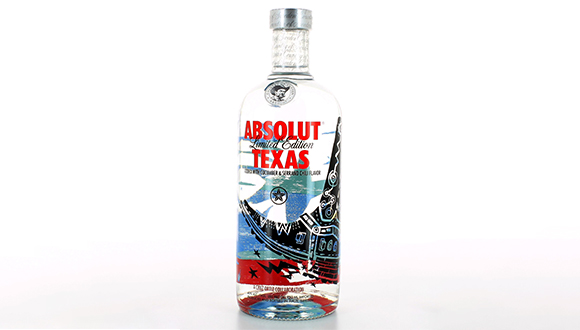 A logo design for Absolut Vodka by Cruz Ortiz

The letter allegedly sent to ¡BUCHO! by Ortiz’s camp on August 22 is said to state, in part:

In a Messenger chat between Glasstire and Regina Morales, the artist credited with designing the logo, she wrote about the origin of her work:

“The concept for the BUCHO logo I thought about what could reflect their food, the culture. I channeled chicano posters and added mariachi flare on the top and bottom. I was in mariachi for years and I went off what I knew in my own life.”

Morales, who is also allegedly named in the letter as creator of the logo, said the letter took her by surprise:

“The first and only time we were reached out to (before the letter) was by the Cruz’s studio director asking who made the logo and that it was similar. (Understandable being that we are in south Texas and a lot of artists share the same influences) I sent her back a poster circa 1972 and never heard back. I figured it was a misunderstanding and I cleared it up.”

Glasstire reached out to Ortiz for this story, and he has not responded at the time of publication. Glasstire did communicate with Olivia Flores Ortiz, Ortiz’s spouse, and in a phone conversation with Glasstire, she had this to say:

“We did send out a cease and desist letter, and gave the designer and company two opportunities to simply take down the design. If they would take it down, we would walk away. As for the optics of two men going after a female artist, I serve as CEO of Burnt Nopal and COO of Cruz Ortiz Art. I am a Latina business owner who sometimes has to make difficult decisions. This just wasn’t a flippant decision, this was based on weeks of numerous community members sending us this logo and asking if it was ours. I am a mother of five, one of whom is very medically fragile. I’m also a cancer survivor and am still under medical treatment. I mention this very personal information because If something happened to Cruz Ortiz tomorrow, where does that leave his family? Where does that leave his life’s work?”

Olivia Flores Ortiz also spoke of the characterization of the dispute being as between a David and a Goliath, when, conversely, she sees the Ortiz company as being a mom-and-pop business:

“This caricature that has been created of Cruz as forgetting where he came from and fake activist is completely inaccurate. We live and work on the Southside of San Antonio and donate our time, product and monetary donations to various non profits and social justice causes such as immigration reform, women’s health, and youth development to name a few. We have to protect the work. Cruz Ortiz is a professional career artist who gives to the San Antonio community and Latinx community as a whole. In order for us to continue this charitable work and public service that is so near and dear to our hearts, we need to also earn a living with our small business and his trademark.”

Ortiz, whose work has been featured on an Absolut Vodka bottle, and used in an ad campaign for Hillary Clinton as well as for Julián Castro, is also well-known in San Antonio for his public art sculpture Dream Song Tower, and through numerous exhibitions of his work.

The San Antonio Current published a second story about the dispute on August 28, in which it published an opinion about the cease and desist letter from St. Mary’s University School of Law professor Genevieve Hebert-Fajardo. In that article, Herbert-Fajardo states that the letter cites Texas Business and Commerce Code § 17.46(b)(2) and 17.46(b)(3), and implies that the the statute cited by Ortiz and his legal team in the letter may not be applicable to his case.

“I am curious that Mr. Ortiz’ lawyer is not explicitly alleging trademark infringement based on the restaurant’s use of the logo.”

This story is developing and will be updated if needed.

I’m sorry, did Cruz Ortiz create [email protected]/[email protected] art single-handedly over 50 years ago? Or did he draw from it? He drew from it. Other artists did the same.You cant own all typefaces of a similar style/influence/origin.

How can she say they’re a mom and pop shop when they have corporate clients and the dude sells his paintings for thousands of dollars? Never heard a mom and pop having a CEO.

I don’t find joy in these kind of stories, but it is karma that Mr. Ortiz put the spotlight on himself with this ridiculous money grab attempt.

Thanks for covering the story

Obviously you can’t “trademark all fonts”, but Ortiz’s work is uniquely and distinctly his.To accuse Ortiz of being arrogant for protecting his work from a “San-Antonio concept pop-up restaurant” is laughable. Ortiz built himself from the ground up. Come up with a new design, like why lie about being solely influenced by 1960’s and 1970’s Chicano posters. All of us as Latino/a/x artist are influenced by those things! But that’s what separates an original artist from an opportunist. To take those influences and interpret them in an original way. Smh, just create a new logo or come to Austin where commodification of culture and other people’s work is common place.