Four works of art by Spanish artists, which span more than 200 years of art history, have been acquired by the Meadows Museum of Art at Southern Methodist University in Dallas. Algur H. Meadows’ “Prado on the Prairie” is famous for being home to one of the largest and most comprehensive collections of Spanish art outside of Spain. The new acquisitions, which include sculptures by Salvador Dalí and Manuel Ramírez, a drawing by Ignacio Zuloaga, and a painting by Emilio Sánchez Perrier, will go on view in the coming months.

Mark A. Roglàn, the Linda P. and William A. Custard Director of the Meadows Museum, states: “We are particularly excited to bring these four works into the museum’s holdings because they represent important developments within each artist’s career as well as essential enhancements to our collection. We look forward to displaying these works in the coming months, and to furthering knowledge about each of these artist’s practices.” 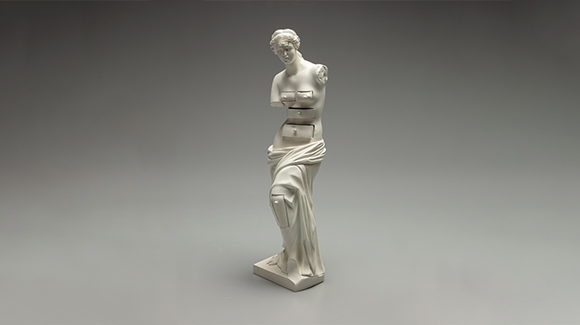 Dalí’s Venus de Milo with Drawers (1936; white paint on bronze; cast 1971, edition 37/150), one of the four works acquired by the Meadows, was first produced in 1936, and was Dalí’s own Surrealist twist on the Musée du Louvre’s well-known 2nd-century BCE Venus de Milo marble sculpture. His incorporation of six pull-out drawers at the statue’s forehead, breasts, stomach, abdomen, and left knee may have represented a linguistic examination or play on the English phrase “chest of drawers,”  although this was never expressed by the artist himself.

“Dalí’s 1936 plaster version of the Venus de Milo went largely unnoticed until the 1960s, at which point it began to be reproduced in myriad editions that included wide variations of the sculpture’s patina and height. The version acquired by the Meadows Museum — a bronze painted white to mimic the original marble inspiration — closely matches Dalí’s first plaster in all but its small scale. The acquisition of Venus de Milo with Drawers follows the Meadows’s 2018 exhibition Dalí: Poetics of the Small, 1929–1936, which highlighted small-scale painting as another aspect of the artist’s incredible artistic range and captured the ongoing popularity of the artist’s work. The acquisition also represents the first sculptural object by Dalí to enter the Meadows’s collection, as a gift to the museum by collector Daniel Malingue, who collaborated with the museum on its recent Dalí exhibition.” 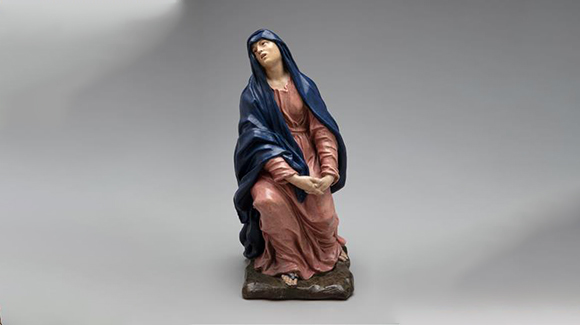 Our Lady of Solitude, by Manuel Ramírez de Arellano, newly acquired by the Meadows Museum of Art, Dallas

On the work by Manuel Ramírez de Arellano acquired by the museum, the Meadows writes:

“Ramírez de Arellano’s Our Lady of Solitude, 1769 is exceptionally rare for what it teaches us about the scope and depth of Ramírez’s practice and in the information it yields regarding the work’s making. Specifically, while there is some archival evidence that Ramírez produced small-scale terracotta sculptures for personal devotion, Our Lady of Solitude proves this aspect of his artistic output. Furthermore, the detailed inscription on the statue’s bottom, which reads in English translation, ‘On January 8th, 1769, in Madrid. Made by Manuel Ramírez,’ firmly attributes the work to Ramírez’s hand. This is particularly remarkable as most sculptures of the time were produced by workshops, making individual attributions difficult to identify. It also locates Ramírez in Madrid during a decade in which details about his life were previously unknown.”

The sculpture, purchased by the Meadows with funds from Barbara Wright McKenzie and Mike McKenzie, is the first sculpture of Marian devotion to enter the museum’s collection. 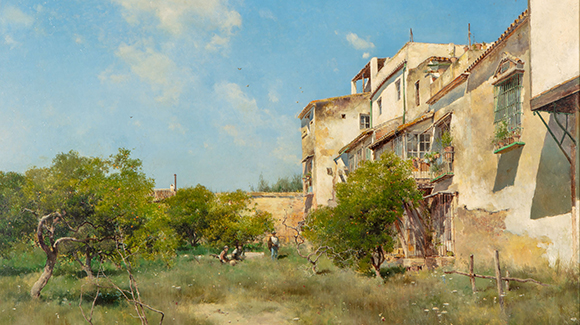 Emilio Sánchez Perrier, a member of a group of Sevillian painters sometimes called the School of Alcalá de Guadaíra, painted Orchard in Seville in 1880. The painting is significantly larger than the artist’s other known works, and highlights the plein air approach that emphasizes the direct observation of nature and shifts away from a romanticized landscape.

“The Meadows’s acquisition of Sánchez Perrier’s Orchard in Seville recognizes the artist’s historical prominence, as well as the value of this work within the context of the museum’s existing collection. The Meadows currently holds Sánchez Perrier’s painting River Landscape (Villennes-sur-Seine) (c. 1895)—a work completed significantly later in the artist’s life. The new acquisition dates to early in his career and is larger than River Landscape (Villennes-sur-Seine). Orchard in Seville also complements a number of other works in the collection, including the painting Ladies and Gentlemen Visiting a Patio of the Alcázar of Seville (1857), by Joaquín Domínguez Bécquer, one of Sánchez Perrier’s early teachers in Seville, and the museum’s recent acquisition, Beach at Portici (1874), by Sánchez Perrier’s famous contemporary Mariano Fortuny y Marsal.”

The museum’s purchase of Orchard was made with funds from Linda P. and William A. Custard, Gwen and Richard Irwin, and friends of the Meadows Museum. 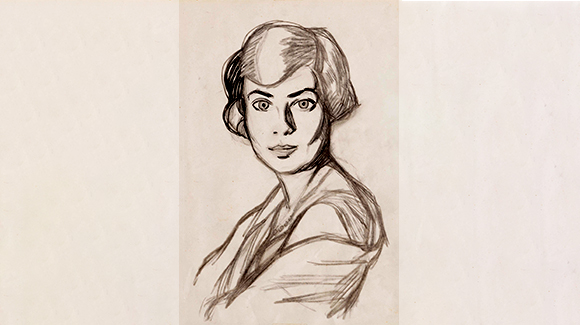 Another acquisition at the Meadows, Ignacio Zuloaga’s Portrait of Margaret Kahn (1923; charcoal and graphite on paper), captures the relationship Zuloaga developed with America’s elite; the drawing depicts an heir to a New York financial fortune. Zuloaga, well-known for his depictions of Spanish culture and identity, gained his widest popularity as a portraitist. Although it is not known how Kahn came into contact with Zuloaga, it is likely she became aware of his work during his 1916 New York exhibition at the Duveen Gallery, which launched his prominence with an American audience.

“While most of Zuloaga’s portrait commissions resulted in paintings, his drawings reveal many of the same formal qualities. With the acquisition of Portrait of Margaret Kahn, which was given to the Meadows Museum by Zuloaga’s grandson Rafael de Zuloaga y Suárez, the museum is adding an important representation of Zuloaga’s artistic process and technique. Portrait of Margaret Kahn also marks the first drawing by the artist to enter the Meadows’s collection, joining three important paintings within the museum’s holdings: The Bullfighter ‘El Segovianito’ (1912); View of Alquézar (c. 1915–20); and Portrait of the Duchess of Arión, Marchioness of Bay (1918).”