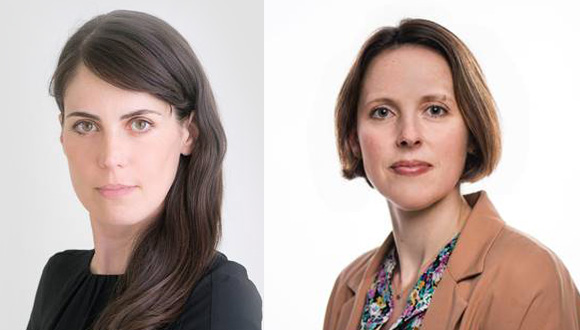 Ylinka Barotto (left), and Frauke V. Josenhans (right), the newly appointed Associate Curators at the Moody Center for the Arts at Rice in Houston.

The Moody Center for the Arts (MCA) at Houston’s Rice University has announced the appointment of Ylinka Barotto and Frauke V. Josenhans as Associate Curators for Moody and Rice Public Art, where they will develop, organize and execute visual art exhibitions and other projects.

Before her appointment, Barotto served as Assistant Curator at the Solomon R. Guggenheim Museum in New York after receiving an MA in curatorial studies at Accademia delle Belle Arti di Brera in Milan, Italy, and completing coursework towards an MA in Art History at Hunter College, City University of New York. At the Guggenheim, Barotto worked on exhibitions including Alberto Burri: The Trauma of Painting (2015), Moholy-Nagy: Future Present (2016), and Visionaries: Creating a Modern Guggenheim (2017). Barotto’s work with the Young Collectors Council  helped shape the Guggenheim’s permanent collection through acquisitions of emerging artists such as Mounira Al Solh, Meriem Bennani, Sheree Hovsepian, Baseera Khan, and Frida Orupabo.

Josenhans has graduate degrees in art history and museology from the Sorbonne and the École du Louvre in Paris, and a Ph.D. in art history from the Aix-Marseille Université in France, and was also formerly the Horace W. Goldsmith Associate Curator of Modern and Contemporary Art at the Yale University Art Gallery. While there, Josenhans’ list of curated exhibitions included Everything Is Dada (2016); Modern Art from the Middle East (2017); and Artists in Exile: Expressions of Loss and Hope (2017). At Yale, Josenhans also organized numerous rotating installations in its Modern and Contemporary art galleries; mentored students; and worked on the acquisition of works by contemporary artists. Prior to Yale, Josenhans worked at the J. Paul Getty Museum and the Los Angeles County Museum of Art, where she helped organize various international loan exhibitions, as well as curated diverse collection-based exhibitions.

“We are delighted to welcome Ylinka Barotto and Frauke Josenhans to our dynamic team,” states Alison Weaver, the Suzanne Deal Booth Executive Director of the Moody Center for the Arts. “We’re looking forward to the creative contributions these two talented women will make in support of the Moody’s mission to foster interdisciplinary conversation through the arts. Through projects that engage both the Moody and Rice Public Art, we have the opportunity to broaden the conversation across fields of research and to engage diverse communities, both on and off campus.”

Inaugurated in February 2017, the Moody Center for the Arts at Rice University is a state-of-the-art, non-collecting institution dedicated to transdisciplinary collaboration among the arts, sciences, and humanities. The 50,000-square foot facility, designed by acclaimed Los Angeles-based architect Michael Maltzan, serves as an experimental platform for creating and presenting works in all disciplines, a flexible teaching space to encourage new modes of making and a forum for creative partnerships with visiting national and international artists. The Moody is free and open to the public year-round.