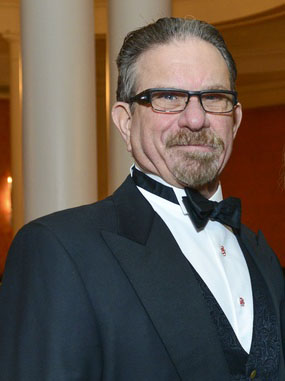 Marshal Lightman, who served as president of the Houston Arts Alliance (HAA) from 2010-2012, and one-time Art League Houston’s Patron of the Year, an honor he shared with his wife Victoria Lightman, died on Sunday afternoon. He was 74.  Among Lightman’s many accomplishments, he served as vice president and regional controller of Gilbane Building Company until his retirement in 2014, and was co-founder of Looking At Art, along with Victoria.

Houston artist Joseph Havel, Director of the Glassell School of Art, had this to say about Lightman:

“Marshal was an incredible friend and a significant supporter of artists in Houston. I worked with Marshal for 27 years as a member of the patron committee that supports the Core Program, the Glassell School’s residency program for artists, critics and curators. I will miss the frankness of his opinions which were always delivered with good humor as well as a desire to make contemporary art in Houston vital and important. He hosted dinners and events for us which were legendary, doing the cooking himself. His generosity extended broadly to artists in Houston over a number of generations. Personally he brought construction engineers he knew from work to my studio after plying them with lunch in order to help solve a structural problem. We became so close over the years; we were family. I will miss him greatly and there will be an empty space in Houston’s art community. He left one hell of a legacy!”

When reached for comment, Leigh Smith, Chair of the Board at HAA wrote: “Marshal Lightman was a treasured supporter and valuable past board member of Houston Arts Alliance. His drive and passion for the arts and individual artists is the stuff of legends. Marshal and his wife Victoria gave much to HAA and to the Houston arts community at large. As a civic leader, friend, and family member, he will be missed by many, and certainly by those who served with him at HAA. We offer our sincere condolences to Victoria.”

Karen Broker, professor of printmaking and drawing at Rice University in Houston and friend of the Lightmans, wrote in an email to Glasstire: “Marshal was a modern renaissance guy who was brutally honest (why I loved the guy), opinionated (but based on solid, real facts, numbers and history), and a man who was equally at home on his boat in the bay as he was in a gallery or museum.” She added, “He was such a presence in a crowd yet he never sucked the air from the room. He injected air into a room. He was a complex whirlwind of laughter, sometimes rage and always, always interesting. I grieve for Marshal and I grieve for my friend Victoria.”

This story is developing and will be updated.

So sad to learn of Marshal’s passing. I learned quite a bit from him. And, his Hairball outfits (along with his wife) were the best! My heart goes out to Victoria.

What a shock to see this news. Houston has lost a staunch and unique supporter of the arts. I worked with Marshal and Vitoria on all things Lawndale during the 90’s. He kept me amazed and amused. And, we loved the 39 Forever parties we were able to attend. My heart goes out to Victoria.

Marshal and Victoria have been pillars of the Houston art community for so long. They have been deeply committed to local artists, as well as all the arts organizations. I am especially grateful for their support of me and my gallery, and all the enthusiastic art lovers they have brought to the shows here with Looking At Art. When I think of one of them, I think of both of them. My sincerest condolences to Victoria at this time. You are so admired, appreciated, and loved in the Houston art community, and always will be.

Sad news. My condolences go out to Victoria during this difficult time. Marshall was tremendously supportive and active in the Houston art scene. A true force that will be sorely missed.

My condolences to Victoria. Marshall was a knowledgeable, entertaining, supportive art enthusiast. There was always a fascinating conversation when he had your attention. He will be missed!

Oh my dear Victoria! I’m overcome with sadness. Truly, I have been thinking nonstop about Marshall for the last 3 days! Maybe 2 weeks. Maybe he was saying good bye! My deepest condolences. We have lost a treasure. Love to you. – Judy Jackson

Pure energy, ageless; very special friend to us. We love you, Marshal. We are going to miss you very much.

Victoria, our hearts are breaking for you. What a force of nature Marshal was. Carson and I have fond memories of Looking at Art adventures, and learning so much from the both you. Our thoughts and prayers are with you.

The best are always taken too soon. I met him as he was beginning his art career. He actually invited me to a party and made me feel special to include his wife. They were a charming couple. I think most great about him is he respected artist which is often not the case with the ignorant public at large. God Bless you.

I am really sad to learn that Marshall has died. I found him charming and provocative. My condolescenes to Victoria. Marshall was a special person.

Goodbye to a staunch supporter of the arts! You will be greatly missed. Marshall and Victoria were an important force in the Houston art scene. And they were so supportive of my late husband’s career. They always brought groups from Looking at Art to our studios. And Marshall always asked terrific, probing questions.
Best thoughts to you, Victoria and to my birthday buddy.

Marshal was a wonderful person with great aptitude, care, and willingness which he used to better all of our lives through his work in Houston’s art community. He will be greatly missed.by so many! Fabené Welch

Very sad to hear about Marshal’s passing. He was an integral part of Houston’s artist community. I very much enjoyed the Looking at Art tours he and Victoria hosted. And I enjoyed being his neighbor for a few brief years on Gibson Street. I will miss him.