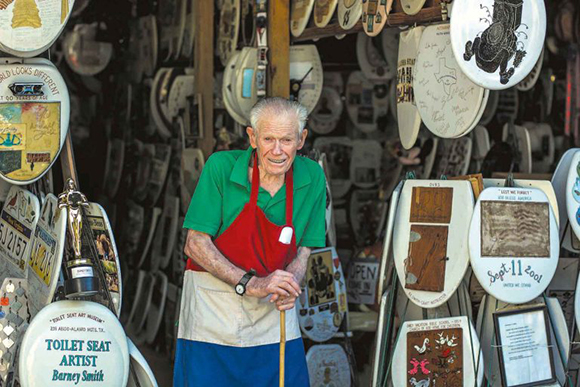 Barney Smith, the 98-year-old San Antonio resident and artist responsible for the Toilet Seat Art Museum, has died. As featured in a Glasstire story from last May by Brandon Zech, Barney Smith’s Toilet Seat Art Museum officially opened in 1992 and has garnered, if not “serious” art press, as Zech puts it, at least Roadside America and Quirky Travel Guy cred.

The museum went up for auction in 2017 when, according to the San Antonio Express-News, the often-exuberant Smith began to experience the effects of dementia. In the article, Smith’s daughter recalled her father forgetting Rudyard Kipling’s When Earth’s Last Picture is Painted, a poem that he would recite in its entirety as a favorite part of his tour with museum guests. “It really bothers him,” she said.

Jason Boso, owner of the entertainment complex and bar called Texas Truck Yard in The Colony, a suburb near Denton, bought the collection this year, and the museum is now permanently installed there.

Barney began making his throne tableaux in 1984 after a hunting episode. According to Zech, “When he was faced with how to display his kills, Smith noticed similarities between the shape of a taxidermy plaque and a toilet seat, and opted to mount his prize on the latter as a ‘backwoods work-around.'” Bolstered by a free supply of Bemis toilet seats a few years later, with the company negotiating exclusive rights to providing Smith’s material, Smith went full throttle and created and amassed the 1000-plus collection that will undoubtedly be a big part of his legacy.

The Express-News reports that the myriad materials used in Smiths’ toilet-seat collection include pieces of the Berlin Wall, barbed wire from Auschwitz, Saddam Hussien’s toilet, and the Challenger space shuttle.

The museum’s Facebook page published the Kipling poem in tribute to Smith at the announcement of his death on July 23.