Three’s a Trend: Blake and Hannah Sanders, and LHUCA’s Eyes on the Planet 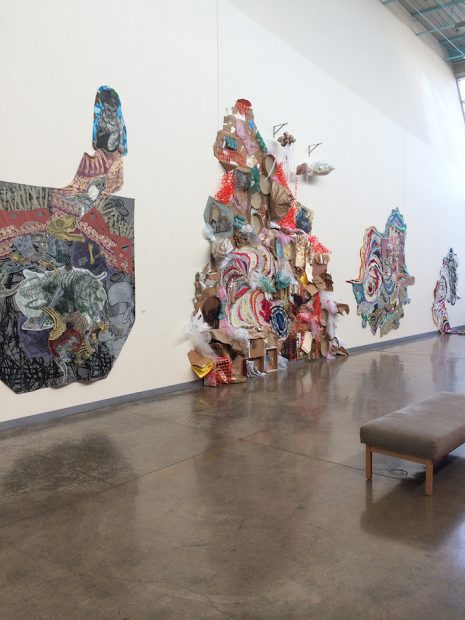 Using repurposed fabric scraps, old crocheted rugs, used packaging materials, and other domestic detritus, Blake and Hannah Sanders, an artist couple also operating under the name of Orange Barrel Industries, create undulating vortex-like tapestries to remind us of our environmental responsibilities. In form and color, their works currently on view at Louise Hopkins Underwood Center for the Arts (LHUCA) in Lubbock draw comparison to fiber artists like Sheila Hicks and the rope coil works of Brazilian artist Maria Nepomuceno, but the Sanders’ used scraps and tat look much more…  scrappy and tatty. They wilt a little off the walls, and scrunch on the floor. They’re weary and worn out, bearing appliquéd fabric words like “EXHAUST” and “REFUSE.”

According to their artist statement, Blake and Hannah Sanders are also the parents of a preschooler, and their son appears as a woodcut likeness in two works in the show. In light of this, the weariness and exhaustion conveyed through these works feels apt. In fact, they could really slump even more — get, like, totally horizontal, if they could — to really capture the energy drain that is the daily life of a parent. But the show is not just about that kind of energy drain. It’s about a more dire, global one.

It dawned on me that this show, titled (w)rest, is the most recent in a series of very ecologically minded exhibitions at LHUCA. These include the recently closed Luminous Lookout, in which several Louisiana-based artists addressed the continuing after effects of the BP oil spill in the Gulf, as well as the show by London-based Inguna Gremzde, which featured paintings executed on reused single-use plastic yogurt lids and the like. As they say, three’s a trend. Maybe it’s a coincidence, and surely there is lots of environmentally minded work out there at the moment, but it could also represent an emergent point of view for the Lubbock art space.

It’s a subtle one, if that’s what it is. Each of these shows featured repurposed materials and quietly stated their case against overconsumption, consumerism, fossil fuel extraction, and so forth. Luminous Lookout was the most overtly political in calling out Big Oil and its enablers, while both Gremzde’s and the Sanders’ works seem to take a more personal approach — the Sanders most of all. 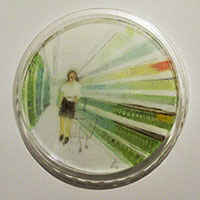 Gremzde, by upcycling plastic packaging as the support for her painting practice, draws attention to our individual consumptive habits. But in the subject matter of the paintings — repetitive scenes of people shopping at supermarkets — she places those habits within a system, thereby deflecting any personal meaning or attachment. One of the genius things about Gremzde’s work is how lightweight and efficient it is: shipping a couple hundred yogurt lids halfway around the world is pretty feasible. (In the same way that shipping mass-produced plastic utensils to every restaurant in the United States is.)

The Sanders, on the other hand, take the matter to heart. “These works provide a garish reminder of how our growing family, and the creature comforts that go with it, have a negative impact on the environment,” they write, guiltily. At LHUCA, they made a demonstrative mountain of trash, stretching about 15 feet high up the wall, from packaging materials and other waste. It’s ugly as hell. I wish it were bigger. I also wish some of the textile works would also spill out onto the floor, challenging the space and implicating the viewer. Some of them do, but mostly just graze it. As it is, the trash mountain and the other works in the show cling politely to the wall of LHUCA, not wanting to impede the audience’s space.

I understand that placing artworks in the way of hundreds of oblivious feet, dog paws, and stroller wheels on a First Friday Art Trail is a logistical nightmare. But it would be kind of amazing, too, to make the viewer step over these rug bodies — like ecocidal casualties. The brilliantly titled Sanders’ work History is Left Beneath, Not Behind, for instance, would have a completely different impact if it were placed on the floor. The work depicts the Sanders’ young son gazing down at a jumble of dinosaur bones and paisley prints. The piece has different sections — he is on a separate, smaller piece of fabric — that would lend itself to a configuration on the floor, opening up a swath of fossilized remains underfoot, like a dark hole the audience would look down into. 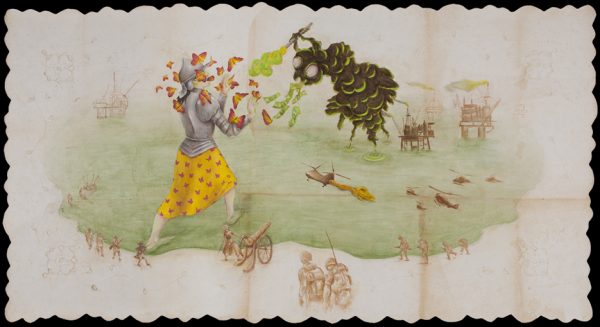 LHUCA’s proximity to the oil reserves of the Permian Basin adds a layer of significance to this particular work, as oil-drilling operations literally suck the stuff out the ground nearby. Works like Spill, Dependence, and Wean further point to our unhealthy relationship with fossil fuels. But while the works in the recent show Luminous Lookout confront the ills visited on the Louisiana coastline by the BP oil spill as an us-versus-them scenario, like in Kelli Scott Kelley’s painting Big Oil that characterizes the corporation as a monster, the Sanders’ (w)rest takes us to task for our personal decisions and what we do to offset our carbon footprint and environmental impact, along with our personal “diligence” to change society.

This message is delivered through the metaphor of parenting — we need to change our society’s bad behavior and teach better habits. I get it. I, too, have gotten on my knees to clean up messes under fast-food high chairs — gathering up wrappers and napkins that were unnecessary to begin with, instead of calling out the establishment for the waste they encourage, or calling on our government to make sustainable alternatives more than alternatives. And while it’s true that we should all be working to reduce our carbon footprint, your individual impact on the environment won’t make much of a difference compared to the responsibilities of first-world governments and big corporations.

But here in Lubbock, among the crowds on a First Friday, I bet there were some people who are actively, materially involved in the fossil fuel industry who saw this show. Whether it will make an impact on them, who knows. I do wonder what they think and where their moral obligations lie. But kudos to LHUCA for keeping these issues in the spotlight.

Through July 27, 2019 at Louise Hopkins Underwood Center for the Arts, Lubbock

“44 Artists from Texas” at the Louise Hopkins...