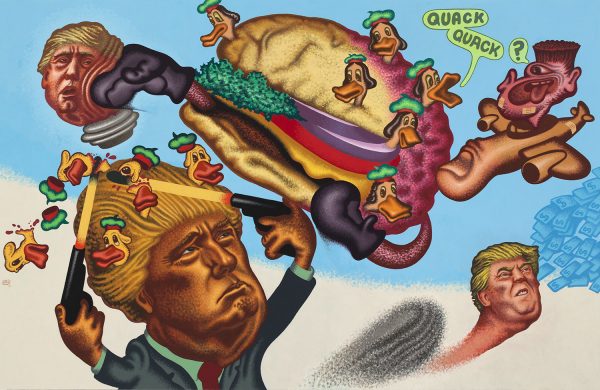 In this Art Dirt podcast, Brandon Zech and Christina Rees talk about censorship, the pitfalls of didactic messaging, and what not to do when making political art.

“We need to keep in mind that art rarely has a chance to actually make a difference.”

To play the podcast, click on the orange play button below. You can also listen to it here. You can also find Glasstire on Apple Podcasts.

Thanks to this week’s podcast sponsor, the Rockport Center for the Arts and their exhibition, Angalee DeForest: Illuminated Reflections. For more information on the show, go here.

Art Dirt: What are NFTs and how did...

Guernica may have indeed been Picasso’s authentic personal reaction to the bombing of the Basque city of Guernica by Nazi airplanes allied with the Spanish fascists, but he also intended it to be a work of propaganda. He allowed people to observe him painting it because he wanted people to know about Guernica. He had it shown at the Spanish Pavilion at the Paris International Exhibition. The Pavilion itself was a work of Spanish Republican propaganda, trying to raise support for the embattled republic.

My point here is that propaganda is not all bad. Sometimes people make a work of art that has an immediate purpose, an urgency of making some political issue known. This propaganda function doesn’t prevent it from being good art.

I really agree with a lot of what Robert writes here, as well as what has been covered in this Art Dirt episode. And though my two cents here may not add anything anyone here hasn’t thought extensively of, I think of the impact historical works like Guernica, and many others (from the paintings and etchings of Goya, to the more philosophically and subtle political works of Joseph Beuys, to the Non-Conformist artists of communist Russia—whose work’s radical political nature often came from the work’s lack of political content) had on my own blooming political consciousness as a young artist who came from poor evangelical conservative southern folk. Whether or not those works had any real political effect on their times, I can personally attest to the way they have effected the political consciousnesses of the future. Maybe good political art has more latent power for the future than it does in its own time (not always I’m sure, but the feeling of finding those works during the blooming of my own political consciousness in my youth certainly did provide a connection for me to the essence of the history of liberal ideals I may have not totally internalized as I did without them).
So, I do wonder if sometimes the political art of a particular era, which may or may not have had much power to change things in its time, have gone on to build powerful social belvederes from which future artist (and hopefully the public too) are able to view the struggles for liberal ideals in a greater historical context.
That said there is so much bad political art these days. Much of this seems to me to come from the approaches mentioned in the podcast, and also having much to do with who is making it and how. I personally became very politically active in my 20’s, and tried hard to extend that into my art practice to pretty disastrous results; I’m a white male who is best at making paintings, and after a few attempts many years ago at trying to bring my political conscious into my painting work, it was so obviously clear it failed miserably for many of the reasons this podcast points out. Though I agree with the podcast that socially activated work should not be the in-vogue standard for art, I do see it, when done well, to be some of the most important and effective political work I’ve encountered. Most of which however isn’t being made, and maybe shouldn’t usually be made by people who look like me (at least here). There are many many artists of color and of various other marginalized groups who’s community based work I think shows just how powerful political art can be (and here I don’t simply mean “political” as about government and politics, but rather work that engages with the political nature of power and oppression in all its many forms; and takes that engagement to the grassroots level). Maybe making this work is not for artists who look like me, but then again that’s not always true ( I think of Gordon Marta Clark’s restaurant Food), so its complicated, and I admire the convo started hear by Glasstire for highlighting this.
Ultimately the best thing I ever did politically as an artist was to open an art space and give it to others who did this kind of work better than I could because of who I am. Most recently I think specifically of the show our space did with Henry Sanchez at Civic TV that engaged with the Dreamers community. That said whether these artists from these backgrounds are making directly political work or not, the very nature of their identity in our world makes their work political in a very important way; and our acknowledgement, support, and engagement with it is in fact also I think a political act.
So for me, as a white male painter, the best thing I think I can do to mirror my deep political feelings in my art is to take a back seat and offer space and support to those, who because of who they are and what they have experienced, can bring far more to the table than I ever could. Again this is not to say all white male painters shouldn’t make political art, just to say that maybe what should set us a part as artists entrenched in a highly disturbing political period is to very thoughtfully consider, before responding, who, how, and in which ways we as a community can arrive at better solutions for the best kinds of political art to thrive.
Hopefully one day like Guernica or Goya’s heartbreaking etchings of war our work will one day many years from now enlighten the consciousness of, if not the public at large, at least the next generations of artists who’s blooming political consciousness will feed on it and grow stronger.

I think the case could be made that occult art has at least as good a chance of enacting change as political art.

If political art can’t save the world, please advise on what activities can.

Unfortunately, political art is undervalued by mainstay museums because of what it is. Take no prisoners, in the moment while the iron burns hot orange. One such gallery is the Center for Contemporary Political Art in Washington DC. I happen to be part of a show, The Good, the Bad and the Ugly- Portraits of Our (unindicted) Leader. Three artists are exhibiting-Tim Atseff, Julian Raven and Jim Boden. Two critical of Trump, one a fervent supporter. My portion of the show is titled The Seven Deadly Sins. A Trump Dystopian Heptology- Seven 45x 60 mixed media paintings. Other than artist statement presentation, there was a mediated panel discussion about the power of art and the threat, of any, to artistic expression. Art that is louder than words.
Go to: http://www.politicsartus.org/

“We need to keep in mind that art rarely has a chance to actually make a difference.”

WOW. I couldn’t disagree more and find that to be a naive and blanket statement. It is however challenging to measure the difference art can actually make, to whom and how. I question what do you define as “art”. Regardless, art is more boundless in form and more accessible then it has ever been before…reaching more and more. Art has certainly made a remarkable impact and difference in and on my life.

Respectfully, I think you may have taken that remark out of context, given the thrust of this episode. We meant broad or sweeping political policy change.

By broad or sweeping political or policy change, what about the Voting Rights Act of 1965? Or other laws signed during the Civil Rights movement? Surely art and especially music in the late 1950s and throughout the 1960s played a role in not only increasing awareness of injustices African Americans endured in the wake of the Reconstruction but also enacting these laws. I’m thinking of incredible recordings by Sam Cooke, paintings by Jacob Lawrence, films starring Sidney Poitier, etc. etc.

Then again, maybe the art and music I am thinking of are examples of “political” art that isn’t “didactic” and art that doesn’t “preach” at you, as Christina says? (Although Cooke of course sang spiritual/gospel music for years . . . ) I’m not sure. I realize this is just a 30-minute conversation, but there’s some important history missing. (I also don’t make “political” are but believe my art, and all art, is both spiritual and political.)

Thanks for responding Christina and don’t think I did in fact take it out of context but was in fact stating not to make a broad statement in these areas. However as Christ so well stated I do understand this was a short conversation and think he did a good job of underlining the point of where my comment was coming from.

Politcal art is usually valued most highly once it no longer threatens the powers that be. Nonetheless, it plants seeds.