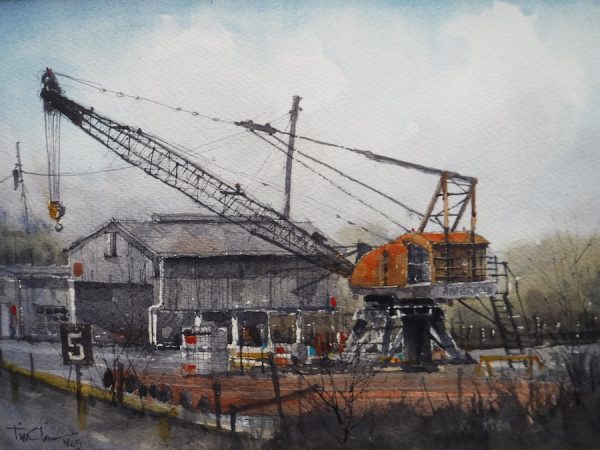 Lubbock-based watercolorist Tim Oliver’s paintings are on (not-quite-official) display during Lubbock’s First Friday Art Trails in the one of the city’s downtown spaces called A Beautiful Mess. Specializing in plein air landscapes, Oliver’s recent work, highlighted in a current exhibition there, runs the gamut from ethereal — such as in Calm, a rosy-hued scene of early-morning lake tranquility — to gritty, as in La Harmonia Store at Castolon and Delcambre Canal Crane. 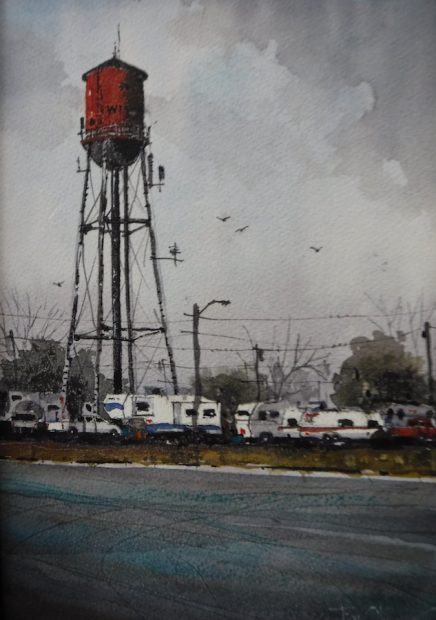 Admittedly a representor of place, Oliver finds that the immediacy of watercolor lends itself to communicating the emotional qualities particular to a given locale. In this way, place acts as character within his works. If human subjects appear at all — there’s not a man to be seen in Boomtown Man Camp, for example — they are largely reserved for ranching tableaus. Even in these, humans are subordinated by the vastness of open spaces: Spade Ranch, South Camp is an example. One notable exception to this rule, though, is found in La Iglesia de San Patricio, in which the faithful, diminutive in size as they file into the church, are nevertheless emphasized as bright pops of color in an otherwise hauntingly somber setting.

Among Oliver’s most intriguing paintings are those depicting the lonesomeness of rural life, such as Farmhouse East of Sundown, TX and Kent, TX Crossing. In their stark coloration and sensibilities of texture, these paintings approach an Andrew Wyeth-esque quality of dilapidated absence. Though occasionally, these portrayals are punctuated with wry humor, as in Water Tower—Shallowater, TX; here, the subject is turned just so, framing the word “hallow” as the tower overshadows a drab, small-town alleyway. 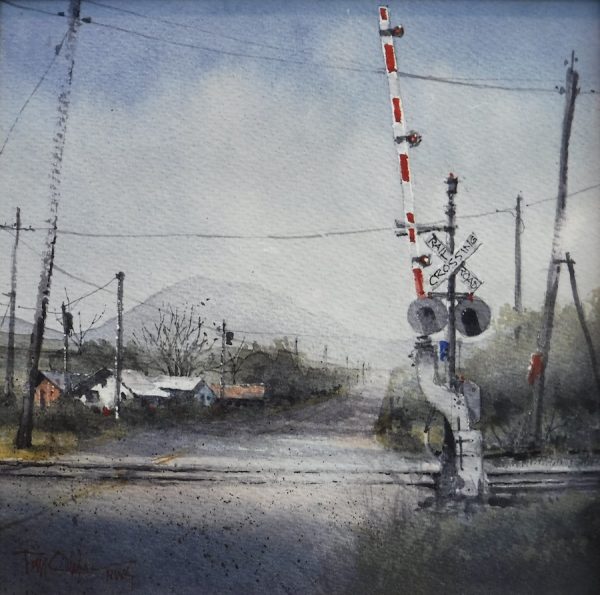 Tim Oliver’s works are just as interpretive as they are illustrative, in that what he omits — or merely hints at — is as impactful as what he chooses to present. While keeping to the confines of naturalism, he nonetheless manages to evoke a quality of placeness that goes beyond just showing a location. Alabama watercolorist Iain Stewart notes of Oliver’s work, “Tim’s paintings hit that sweet spot between too little and overworked. His choices in how he interprets what he sees and the mood he inspires in the viewer is a clear indicator that he’s an observer at all times.” Oliver finds that the most compelling subjects for observation are the seemingly insignificant, the isolated and overlooked locales offered by farm-to-markets and county roads. Whether he’s representing the bayous and bays of Louisiana, the expansiveness of West Texas, or the barren austerity of the New Mexico desert, Oliver’s paintings are imbued with atmospheric quietude. Even at their most lonely, it is comforting to know that places like these still exist.