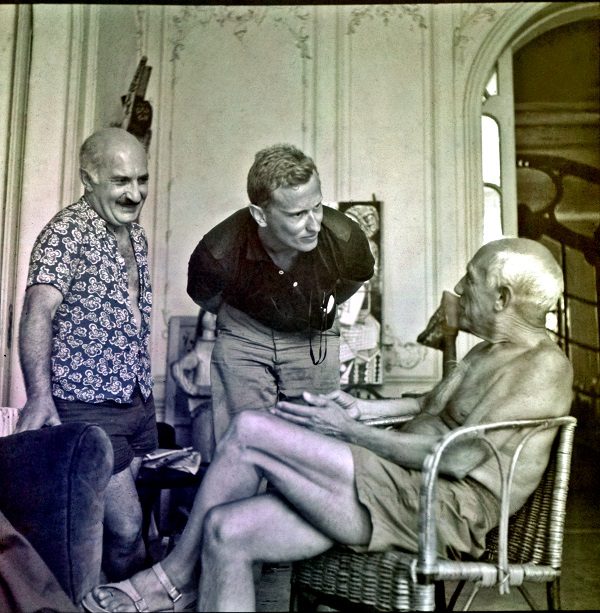 Frederick C. Baldwin, Self-portrait with Picasso, 1955/2014. Courtesy of the artist.

Frederick Baldwin, age 90, and known for his portraits and black-and-white photographs, has released a new book titled Dear Mr. Picasso: An Illustrated Love Affair with Freedom.

Published by Schilt, the illustrated memoir is Baldwin’s first foray into writing and recounts his life’s story from his time as a young photographer to when he co-founded Houston’s FotoFest with wife Wendy Watriss in 1983.

Baldwin’s long and impressive career started with a great stroke of luck, when he happily stumbled into Picasso’s villa in the south of France one summer. The aspiring photographer took some of the more candid photographs of the great artist, and as a result made the young Baldwin a very successful photographer.

After Picasso, Baldwin took on a more journalistic (and adventurous) approach to his photography. Notably, Baldwin went on to document the Korean War, reindeer migrations in Lapland, cod fishing in Arctic Norway, the Ku Klux Klan, and polar bear expeditions.

But perhaps Baldwin’s most significant moment as photographer was in his time Savannah, Georgia in 1963 during the Civil Rights march. There he took many iconic photographs of protesters, and beautiful portraits of some of the more prominent leaders of the movement, including Hosea Williams and Martin Luther King, Jr.

The book dutifully chronicles all this and more, up until the moment Baldwin and Watriss together founded FotoFest.