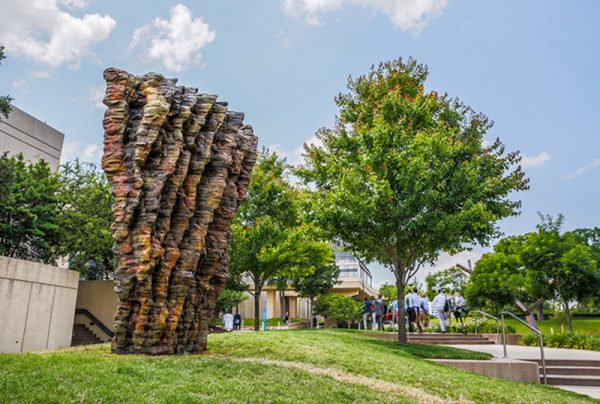 Gallerist Talley Dunn worked closely with Joseph L. Godstein to select the artworks to be donated. Subsequently, the gallery also coordinated the fabrication of each work by Shapiro and von Rydingsvard, and oversaw the overall installation of the works on the UT Southwestern campus.

“With outdoor work, I need to be here to make sure that the pieces are placed properly, since they have both a front and a back,” Dunn told the Center Times earlier this month. (This is totally understandable given the size and intricacies of each piece.)

Shapiro’s Unitiled measures 24 feet high, while von Rydingsvard’s Dumma is just under 11 feet. Shapiro — who has exhibited all over the world and recently at the Nasher Sculpture Center in Dallas — was specifically commissioned to make this new work: a giant stick figure made of rectangular shapes, which is a quintessential trademark in Shapiro’s oeuvre. Von Rydingsvard — who currently has a solo exhibition of her sculptures at the National Museum of Women in the Arts in D.C. —  here presents a large monolith that takes the form of earthy rock formations, which is also reminiscent of her other works. 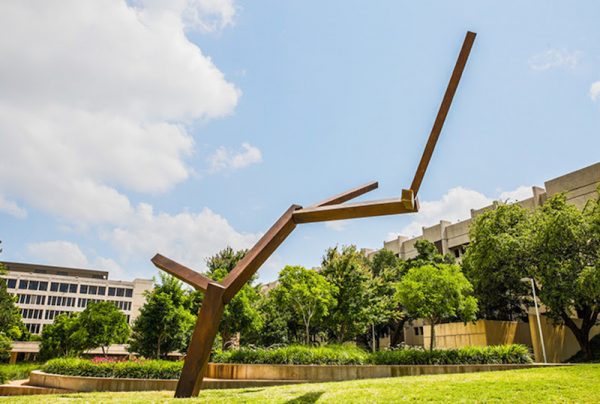 Together the sculptures compliment each other, both in contrast and similarity, creating a balance between the rigid geometric shapes of Shapiro, and the ragged surfaces of von Rydingsvard. You can see the sculptures at Seldin Plaza, located on UT Southwestern Medical Center’s South Campus, along Senator Kay Bailey Hutchison Drive.

Art that Heals: Works at University of Texas...