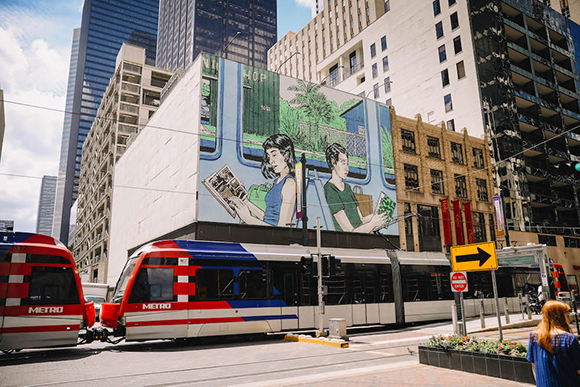 Commute depicts two women on a commuter train facing away from each other, both reading books, as a city neighborhood is framed by the train’s window. Welch’s comic-book style illustration measures three stories tall and faces the tracks of Houston’s Metro Rail at 901 Main Street.

When reached for comment about the work, Welch replied: “Commute is a musing on how travel is like a liminal space — like reading — which can transport you not only physically, but through imagination and meditation.” She continued, “Because of low vision I can’t drive and I spend a lot of time on public transit, so having artwork visible from the train is a real treat.”

Angie Bertinot, Downtown District’s Director of Marketing and Communication, writes in a public statement about the work: “We were drawn to Sarah’s bold, fresh aesthetic and love Commute’s deeper message that one doesn’t have to physically travel far to experience new things.” 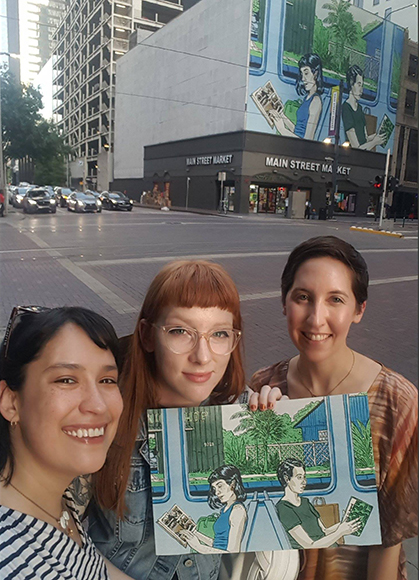 Welch received a Bachelor of Fine Arts Degree from the School of the Art Institute of Chicago, and her work includes prints, zines, and comics, which she publishes with Houston’s printshop Mystic Multiples. She is also a co-organizer of Zine Fest Houston, a day-long festival promoting zines and other forms of small press. María-Elisa Heg and Anastasia Kirages, co-organizers of Zine Fest, are Welch’s subjects for Commute.

Art Blocks is curated by the Downtown District with the help of community leadership and project consultation by Weingarten Art Group. More information about Art Blocks can be found here.