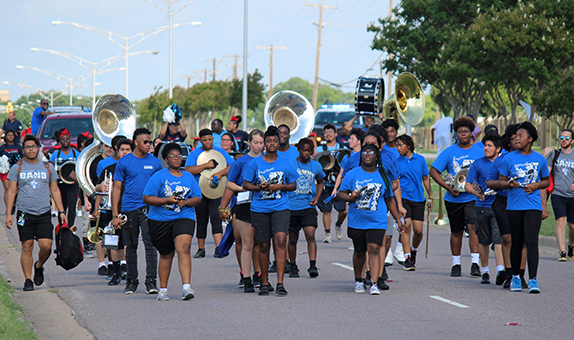 The Emancipation Proclamation, which freed slaves in America and became official on January 1, 1863, wasn’t announced in Texas until June 19, 1865 — two and a half years later. On that day, Union soldiers led by Major General Gordon Granger arrived on Galveston Island with the news. Thus began the celebration of Juneteenth in this state, which became an official Texas state holiday on January 1, 1980.

Juneteenth festivities are happening all across the state, and we’ve highlighted a few below.

San Antonio’s Juneteenth Emancipation Day Celebration is presented by the San Antonio Juneteenth Association, and began over the past weekend with a concert by the band Brick, in Comanche Park. The celebration continues with the Texas Freedom Festival on June 28 at the New Braunfels Civic and Convention Center in New Braunfels, and the 19th Annual Juneteenth Golf Tournament, today, June 17, at The Club at Sonterra, in San Antonio.

Dallas celebrated Juneteenth with events sponsored by a few organizations. Dallas Southern Pride hosted the Juneteenth Unity Festival Weekend last Friday through Sunday, and the Martin Luther King Jr. Community Center will commemorate the day on Wednesday with the usual fare of food, health screenings, games, and music. There will also be a ribbon-cutting ceremony for the grand opening of the MLK Fresh Food Distribution Centersponsored by Leadership Dallas, at the MLK center. The Willie B. Johnson Recreation Center will host their 35th Annual Hamilton Park Juneteenth Parade and Festival next Saturday, June 22, at 10:00 a.m.

Tarrant County College South Juneteenth festival included a prayer breakfast at the Meadowbrook United Methodist Church last Thursday, and a day of music, barbecue, and bodybuilding on Friday. The annual Juneteenth parade was on Saturday, June 15, and was followed by a 5k and a mile-long run/walk. The festivities continue this week with events including community matron Ms. Opal Lee’s induction onto the Wall of Fame at the Fort Worth ISD’s Administration Building on Monday, and a performance of Juneteenth the Stage Play at the Will Rogers Auditorium on Tuesday, June 17, at 7:30 p.m.

Beginning at noon on Wednesday, June 19, Galveston will host The Juneteenth Celebration Parade, which will culminate in a picnic at the Wright Cuney Park. The Old Central Cultural Center also hosts the Galveston Juneteenth Cotton Ball.

Juneteenth will be celebrated in Houston with a daylong schedule of events. Emancipation Park will be the site of the 147th Annual Juneteenth Celebration, which kicked off with a parade last Saturday and will continue with youth activities and performances on the 19th. There will also be a Juneteenth Walk to freedom on Wednesday from the Houston Museum of African American Culture to the Miller Outdoor Theatre from 5-6:30 p.m.

Juneteenth Central Texas celebrated their annual Juneteenth Historical Parade over the weekend. The event included other activities such as live music and food in Rosewood and Boggy Creek Parks, as well as a Freedom Run/Walk on Saturday.