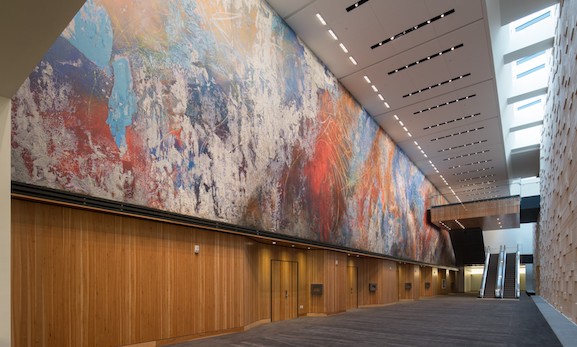 Every year Americans for the Arts (AFTA), through its Public Art Network, honors 50 public artworks unveiled across the country the previous year as an outstanding project. This year among the Texas-based winners of this honor is José Parlá’s Amistad América. a 4,000-square-foot mural inside the University of Texas at Austin’s Robert B. Rowling Hall. The piece was commissioned and unveiled in 2018 by Landmarks, UT’s acclaimed public art program. This is Landmark’s fifth national award from AFTA.

Parla is a Brooklyn-based artist. UT describes his Amistad América as his “most ambitious project to date, displaying unprecedented scale and metaphoric complexity. The mural contains Parlá’s typical layering techniques including variegated collage, dense pigments and calligraphic strokes. It renders the city of Austin through the artist’s eyes while situating it within the larger geopolitics of the Americas.”

Other Texas-based public works awarded by AFTA this year are: two mosaic murals by Dixie Friend Gay — one at Sam Houston State University and one outdoors in midtown Houston; a bronze work in a park in Austin designed by Holly Young-Kincannon and carved by Joseph Drummond Kincannon; an outdoor work in Austin by Josef Kristofoletti; Havel Ruck Projects’ altered house in Houston’s Sam Houston Park; and Adriana M. Garcia’s mural at San Pedro Creek Culture Park in San Antonio.

For a full list of AFTA’s most compelling public artworks of 2018, please go here.