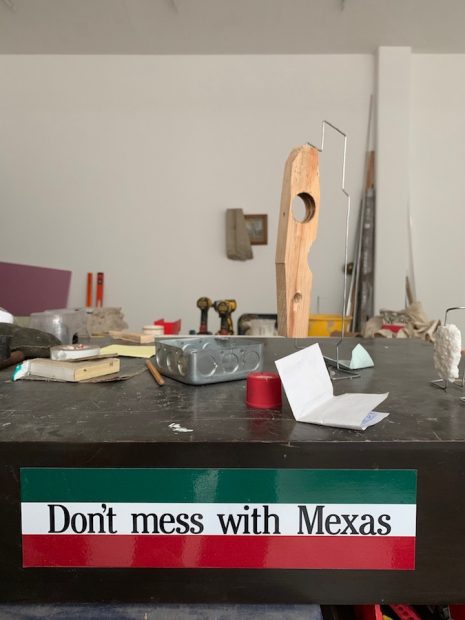 The following is Part One in a series of three art-travel essays by the author. Find Part Two (Monterrey) here.

It was hot when we walked off the plane in Guadalajara, and over the course of the next few days we would find out that we were visiting at the hottest time of the year. Zac Traeger, director of Unlisted Projects Residency in Austin, and I had skipped town that morning, then picked up Miguel Angel Salazar, known to everyone as “Wimpy”, on our layover in the Mexico City airport. The three of us were embarking on a nearly two-week adventure to Guadalajara, Monterrey, and Mexico City. We had recognized that our program was very centralized with Mexico City, a natural consequence since Wimpy and I both live there and know it well. Our adventure was meant to rectify that — to understand the art scenes in different cities, to find potential collaborations, and to generally make friends in new places. 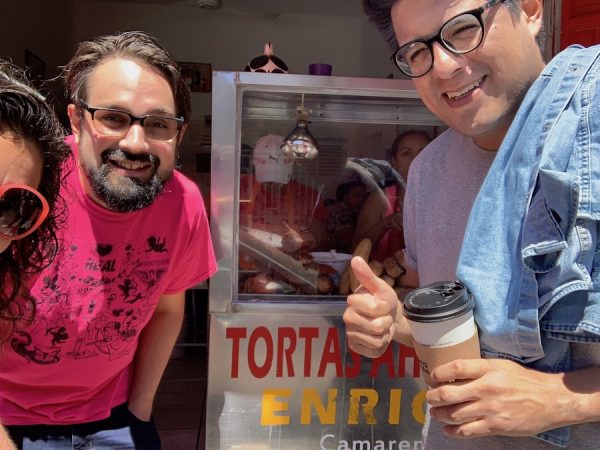 We were excited to be in Guadalajara. The air was warm but light, and there was an energy about the city that we wanted to dig into. We had arrived later in the evening after a long day of travel. The flight should have been shorter, but Austin’s lack of flight options to Mexico made the day long and exhausting, and the distance felt expansive. We made a taco stop then settled into our Airbnb. The itinerary for the coming days was packed and we needed our rest. 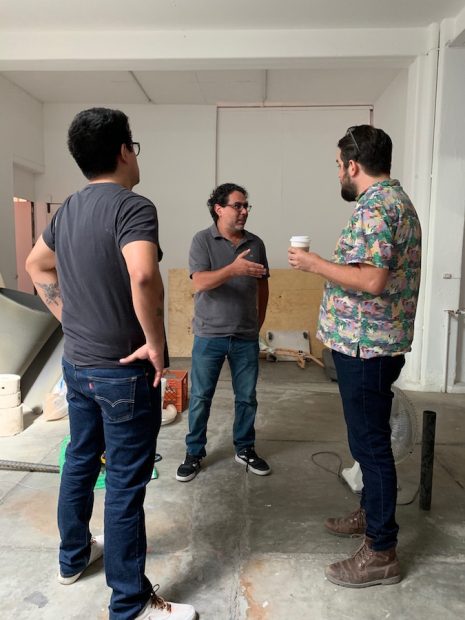 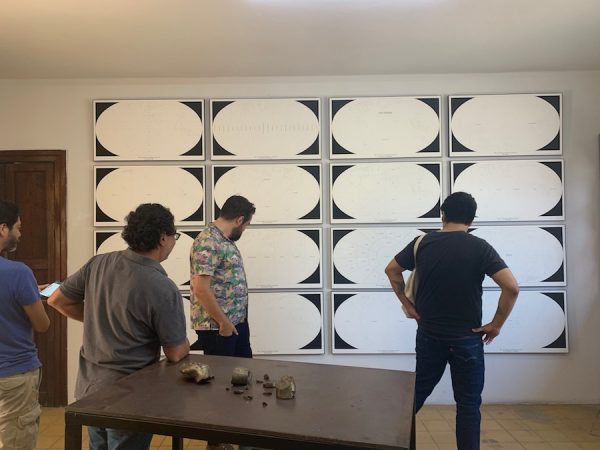 The three of us woke up easily on our first full day in Guadalajara. Our place was centrally located and we would learn it was also convenient to the art scene. Our first stop that day was an easy 20-minute walk to the outskirts of downtown to Taller de los Guayabos, a shared studio space and artist residency program run by Octavio Abundez, Luis Villalobos, and Alejandro Almanza. The space is a massive two-story house named after its excess of guava fruit growing in the beautiful guava trees that fill the central courtyard of the house. Octavio and Luis met us there that day, and explained their programming of visiting artists and collaborative projects with other institutions while walking us through their own studios and the house itself. It was only our first stop, but it was already clear that there was a connectivity between organizations and artists here that felt effervescent, and we were quickly caught up in it.

The excitement escalated when we made our way to Artere-A, a roving project space that has nearly a decade under its belt. Founded and run by Omar Guerra and Raul Rebolledo, Artere-A not only has a stake in Guadalajara’s current scene, but was also partly responsible for its formation in the late ’90s. Over the course of an hour, the pair told us about how the art scene in Guadalajara grew from its benefit of space, affordability, and experimentation. We learned of the generational divide, of the lack of schools to provide arts education, and how thus a system of mentorship and community organically came to fill the educational gap. Artists coming of age and gaining respectability in the ’80s began to mentor the younger generations of artists after them, and built a scene so closely woven together that breaking that tissue is nearly impossible. 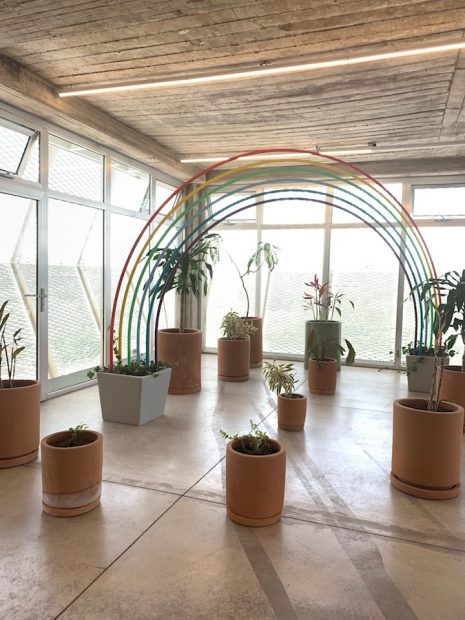 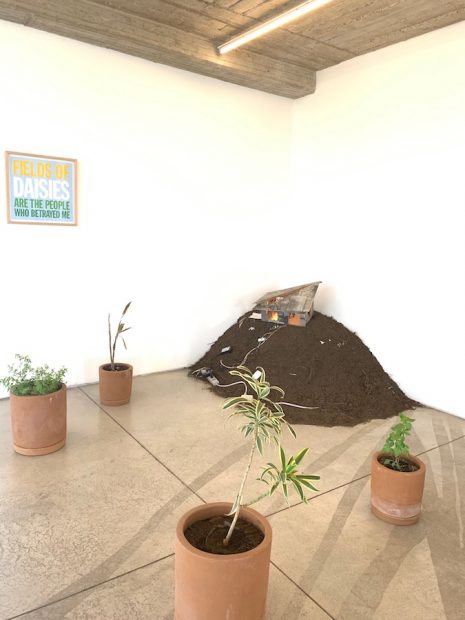 This connectivity and mentorship was a topic that came up repeatedly as we moved throughout the city. Artists were grateful for the mentors that paved the way for a supportive community and informal education. We made our way to the small gallery Ladera Oeste, where this generational mentorship was transparent. Cofounded by Jorge Méndez Blake, international art star from Guadalajara, the exhibition on view was curated by the young and talented Paulina Ascencio. The exhibition played with the meaning of being an immigrant, and looked at the world in relationship to nature and geography. When we walked into the space we entered a garden of plants, all of which are considered indigenous to Mexico, but in fact have roots in other places, and thus have migrated to Mexico one way or another. 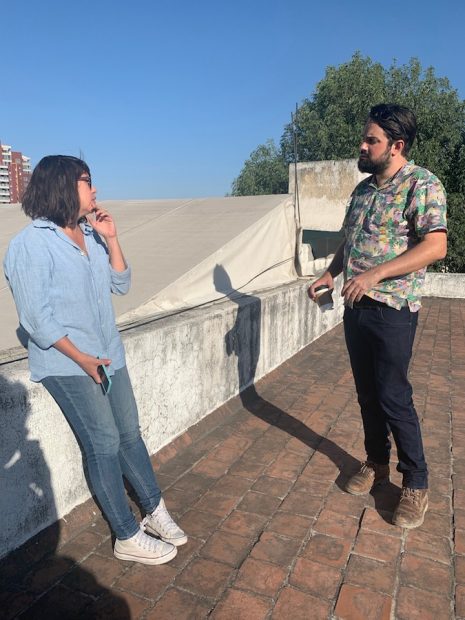 We spent the afternoon wandering around the neighborhood before we made our way to PAOS to sit with the infamous Lorena Peña Brito, a figure I had long been in touch with, but never had the opportunity to meet in person. She had founded PAOS together with artist Eduardo Sarabia in what was the final home of famous Mexican muralist José Clemente Orozco, and perhaps one of the most significant points of departure we learned of between Mexico City and Guadalajara. 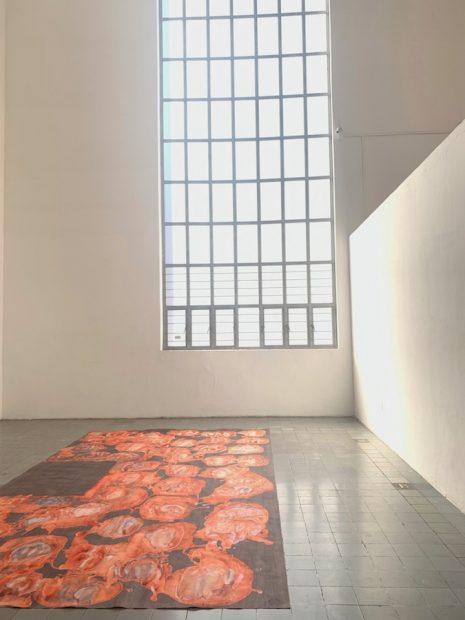 The city of Guadalajara is full of impressive and historically important murals by Orozco, who spent the majority of his later years in the city. His production set forth a tradition through which he has become revered, with his work beloved by artists and non-artists alike. It goes without saying that his spirit is a major force in the art history of Guadalajara. This reverence still exists with the younger ecosystem of artists — a surprising sentiment that piqued our interest. In Mexico City, the classic muralists have long been rejected by younger generations, particularly those coming of age in the ’90s, and this divergence in attitude between the two cities was palpable. In Mexico City the generation of the ’90s rejected traditional mediums of art production, painting and muralism in particular, as it was considered more and more a medium used by the nation-state for propaganda purposes. The younger generations of artists turned more towards experimental medium such as video, site-specific intervention, and performative activation that oftentimes overtly criticized the government.

At PAOS we were standing in the former studio of one of the great muralists whose home was converted into a contemporary art space that hosted resident artists and whose program is one of active institutional collaboration in the contemporary art scene. Lorena walked us through the space and told us stories of the ways in which artists used it as an incubator, as an active and special place to connect with the history of muralism and painting in the city — one that is not a sentiment of rejection but rather acceptance and reverence. 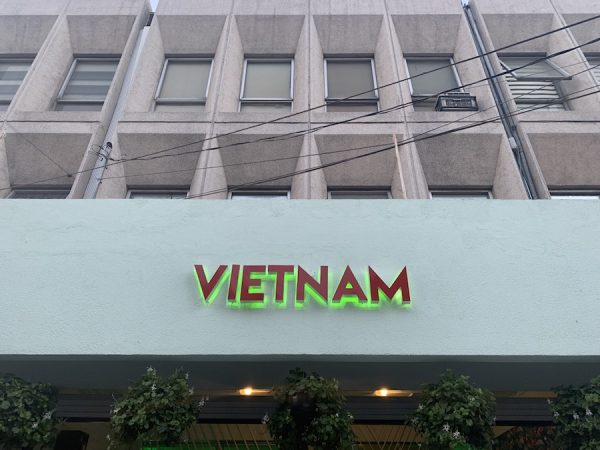 We said our goodbyes and promised to stay in touch. Our connection with Lorena was an immediate one, with ideas for future collaborations, and we were still on a high when we walked into Vietnam bar to share beers with everyone we had met that day, and more friends they had invited along. 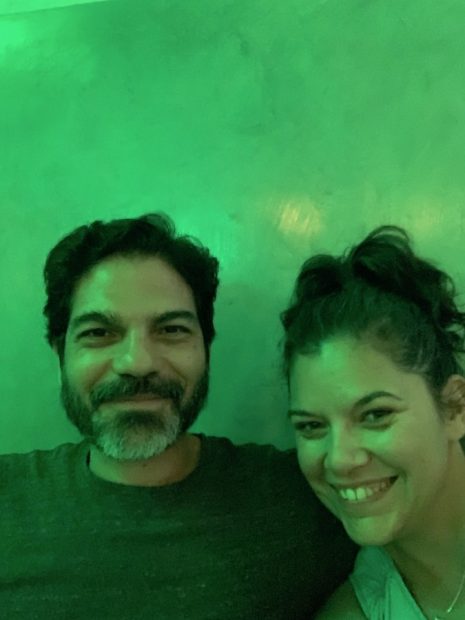 Guadalajara had been good to us. In less than 24 hours we had made new friends whose relationships would last a professional lifetime. Our second day in the city was focused on the youngest generation of artists who are building an emerging scene. Although the art ecosystem was based on generational mentorship, we had begun to sense a visceral generational shift with younger artists, and we were eager to understand it. 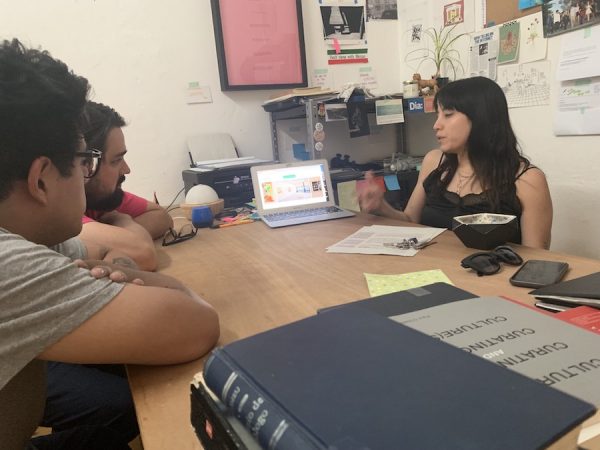 We had planned lunch with Paulina Ascencio, a young curator whose work has garnered respect throughout the country, and with good reason. Over the past few years she has focused on residencies and collaborative projects with some of the top curators in Mexico and internationally. With a background in philosophy and social sciences, she’s shown a knack for mobilizing her community and presenting thoughtful and challenging exhibitions. Over a long lunch Paulina told us about her practice and her commitment to the city of Guadalajara. 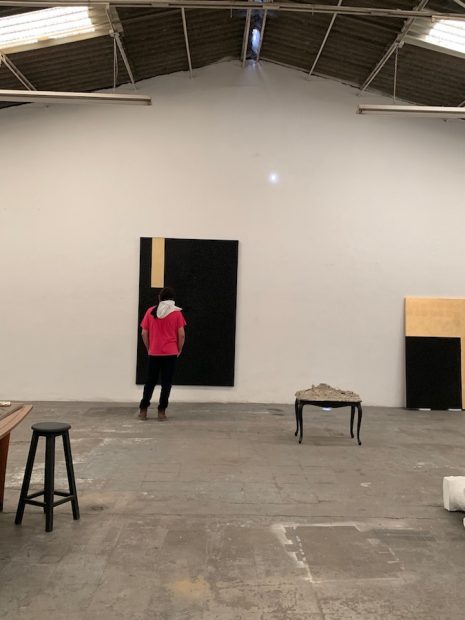 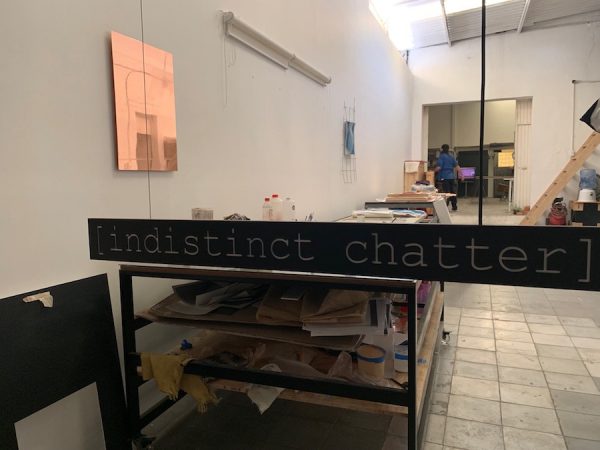 Paulina has an office/studio in Estudio Hospital, yet another massive studio space shared between four other artists. Paulina had also organized for us visits with each artist in the building, as well as another round of visits with the young artists collective Faena. That afternoon we met with Cynthia Gutierrez, who looks at monuments and the constructs of memory to deconstruct or challenge history; with Cristian Franco, an artist who has developed an entire practice around an alter ego in the punk-music scene; and with Emanuel Tovar, whose quiet and poetic work is grounded in literature and history. Once again it was obvious that the shared studio complex grants the artists an ongoing conversation and camaraderie necessary in community building. It was the second of such spaces that we had visited, and it was clear that the city’s art community relies on them and that institutions such as PAOS respond to that community and offer even more collaborative opportunity. 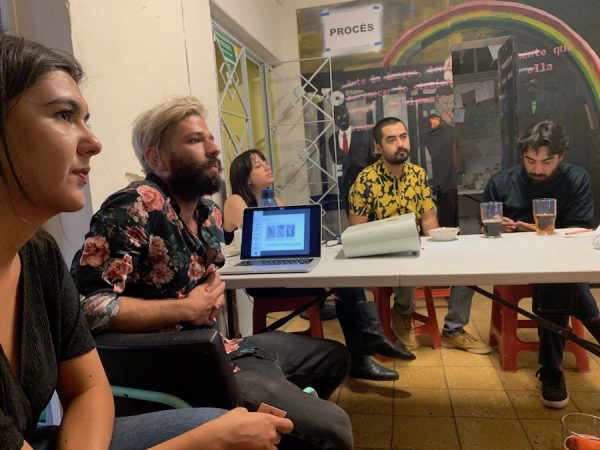 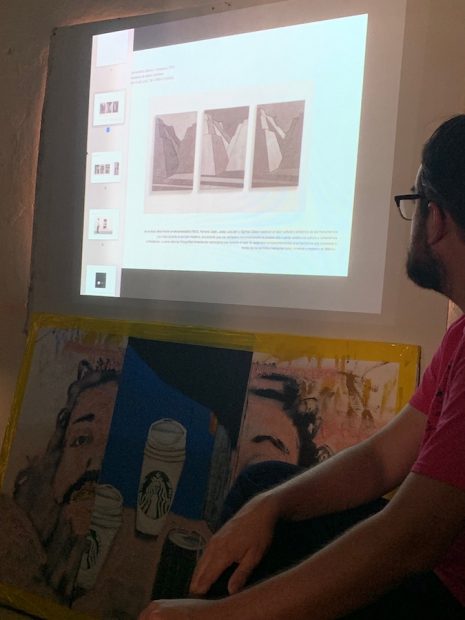 It had been a long but energizing day, one that coalesced easily through the openness of everyone we met. We had been welcomed into a community of people that had built a foundation of trust and sharing between them, and they welcome others to witness to the magic. We still had one more stop, with five more rapid-fire studio visits at yet another shared studio building called Interior 2.1 and the collective FAENA. We gathered in the common area of the space. A table and projector had been set up in the center, and the only window in the room was covered with a board on which to project on. We listened to Aldo Alvareztostado, Ramiro Avila, Temoc Camacho, Daniela Ramirez, and Bruno Viruete as they showed us organized and thoughtful presentations of their practice and most recent projects. Throughout our day we realized, more and more, that the object took less of a spotlight for the city’s artists. Each artist we spoke with clearly outlined their conceptual practice and line of thought, allowing the object to exist as a remnant of that conceptual practice.

We all made our way to a bar for beer and tortas, where Zac tried pickled chicharron, or pig skin, for the first time. We had had a long day, and felt like we were ending with a brain massage. We had one more day in Guadalajara before hopping on a plane to Monterrey.

Our final day in Guadalajara was full of studio visits. That day I made a point to focus our visits on female artists. In general, Mexico is still behind the times in its representation of women in the arts, both as artists and as administrators, and in many of our networking visits I was the only woman in a group of men. 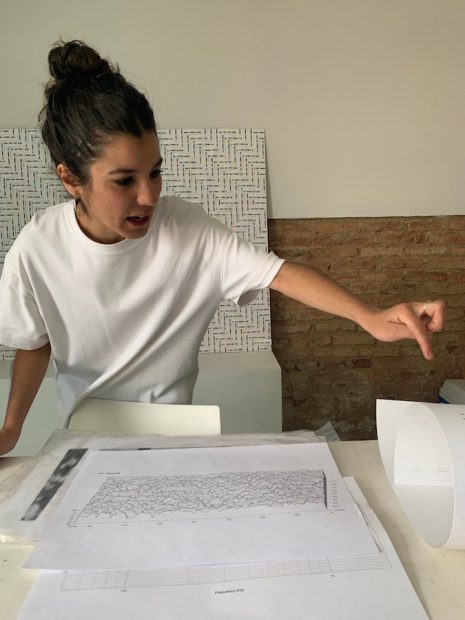 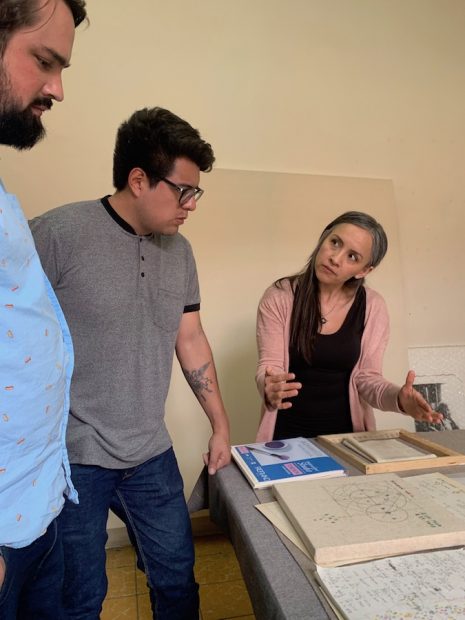 We made our way to the neighborhood of Zapopan to visit Ana Paula Santana, a young artists whose multidisciplinary work vacillates between performance and sound activation, with objects that are remnants of both. We visited Isa Carrillo, a palm reader and numerologist who had combined her skills as a draftsperson to make formal works that reflect the individuals her practice is based on. We made our way back to the center of the city to talk with Renata Petersen, an irreverent ceramicist who pulls references from Mexican pop culture to show the porousness of religion and nationalism. And finally, we made our way back to Taller de los Guayabos, where it had all started, and where we had a chance to speak with resident artist Carmen Argote, who had made a body of work about the accessibility of fruit in the area in general, and specifically the plethora of guava fruit growing on the trees in the courtyard. 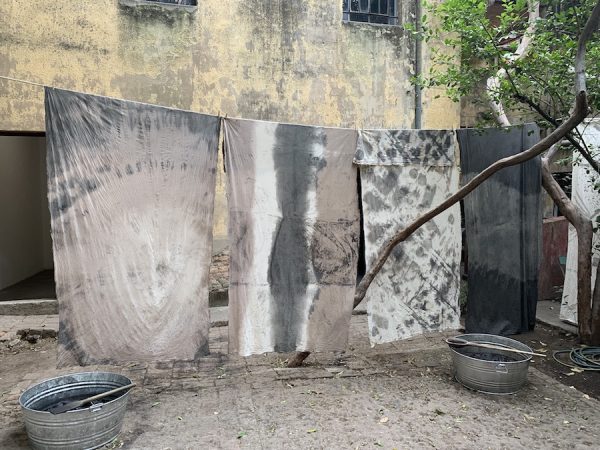 We waited until the last possible moment to leave, and said our goodbyes over a fresh, local tequila. We weren’t ready to go, and we could easily have stayed many more days, but that is also the draw of Guadalajara: you get pulled in before you know it, then leave with an even bigger metaphorical family. 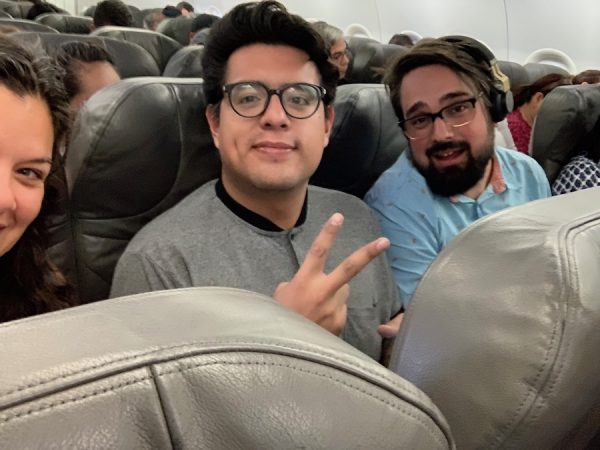 We made our way to the airport, mentally preparing for our next stop in Monterrey and everything we would learn there.

Thank you Guadalajara: A super-special thank you to so many that weren’t mentioned here: Joaquin Segura, Virginia Colwell, Javier Barrios, Carlos Maldonado, Yeni Mao, Rigo Campuzano, Alejandro Garcia Contreras, Jaime Ashida, and the maestros at the Taller de Gobelinos, Kathryn Mikesell and everyone along the way that made our time easy and comfortable.
Next up: Monterrey
0 comment