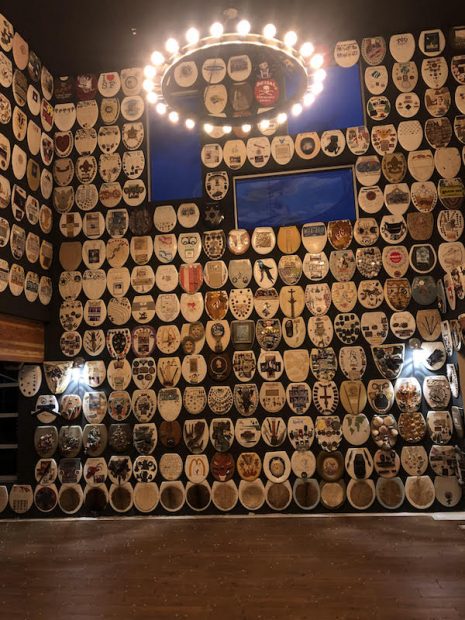 Barney Smith’s Toilet Seat Art Museum in its new location, just weeks prior to its opening.

The Toilet Seat Art Museum, established in San Antonio’s Alamo Heights neighborhood in 1992 by artist (and plumber) Barney Smith, has been on the market since 2017. Smith, now 98, is relieved that the museum of more than 1200 decorated and altered toilet seats (made by him, and which have lived in a display shed for years), is heading to its new home in bar in a suburb of North Texas.

New owner Jason Boso, the proprietor of an expanding chain of bars called Texas Truck Yard (or simply Truck Yard) wanted some interesting art to showcase in the newest branch of his enterprise. When he spotted the Toilet Seat Museum online (in what he describes as a bit of ‘drunk Googling’) and saw that it was for sale, he contacted Smith and they worked out a deal. The new location for the bar and museum opens this month in The Colony, in Denton County. 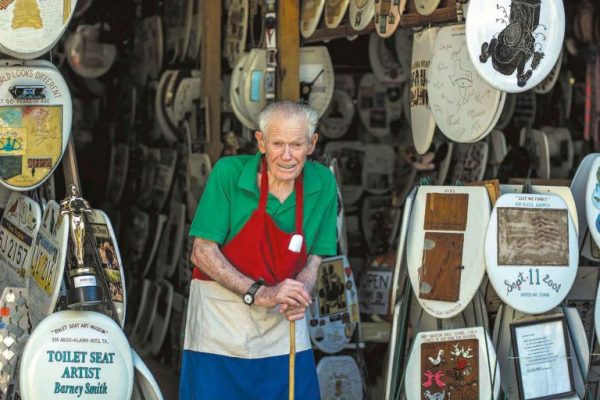 In 2018, Glasstire’s Brandon Zech wrote about the Toilet Seat Art Museum and Smith as the artist: “Like everyone else who’s visited, I called the museum’s phone number and soon had Smith’s emphatic voice ringing in my ear. He said that he was in the museum right now, but I better hurry, because it’s summer and he wouldn’t be open much longer, especially not in the heat of the day.”

Smith created his first seat in 1984, after deciding to mount a hunting trophy on a toilet seat rather than a traditional mount. Since then, writes Zech, “The toilet seat works reveal the keen eye of a seasoned collector. Some of the seats feature amalgamations of objects that Smith must have gathered over his lifetime, including arrowheads, stamps, railroad spikes, horseshoes, and more. Other collages are more quizzical, including dental instruments and fake teeth, Scrabble tiles, and an homage to Mike Rowe’s TV show Dirty Jobs.” The museum was a favorite of locals and road-trippers seeking out quirky slices of Americana and self-taught art installations. 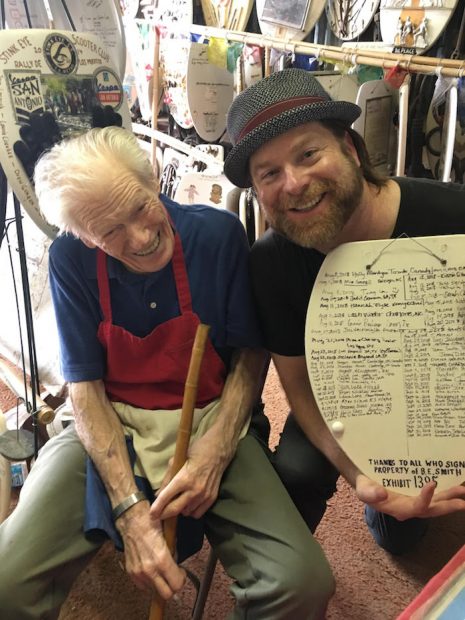 The museum’s unveiling in its new location takes place later this month, at Truck Yard, on Grove Lane in The Colony. It will be a permanent installation in what is the third Truck Yard location (the others are in Dallas and Houston). Truck Yard encompasses the bar (which is where the museum is located), an event space, an outdoor space for food trucks and games, and “In the coming months, Truck Yard will expand further with a tiki bar, karaoke lounge and an on-site brewery.” The new official name of the museum is Barney Smith’s Toilet Seat Art Museum.

If you’d like to see and learn more about Smith and his toilet seats, in 2018, Austin’s Cattywampus Press released the book  King of the Commode: Barney Smith and His Toilet Seat Art Museum.