In the Studio with Drew Liverman, Austin

by Lauren Moya Ford May 24, 2019
FacebookTwitterEmail 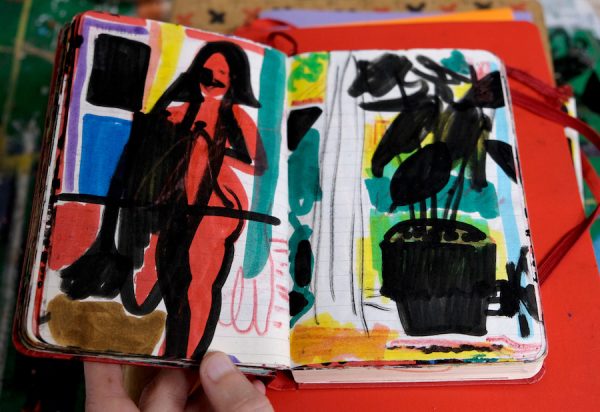 All artwork by Drew Liverman. All photos by Lauren Moya Ford.

The French painter Pierre Bonnard once said that “you cannot possibly invent painting all by yourself.” The statement rings true for Drew Liverman, an artist who’s been based in Austin since 2006. Liverman’s dialogue with 20th-century painting is part of what makes his work so enticing. Picasso, Matisse, de Kooning, Kippenberger, Arshile Gorky, and Charles Burchfield fill his studio bookshelf, and echo in his work’s jewel tones and sinuous forms. But the success of his work is also his honed technique. Liverman’s seemingly effortless paintings and drawings are built on years of art-historical synthesis, including his early days studying perfectionists like Norman Rockwell and Maxfield Parrish. The artist has learned the rules, and now he can break them. 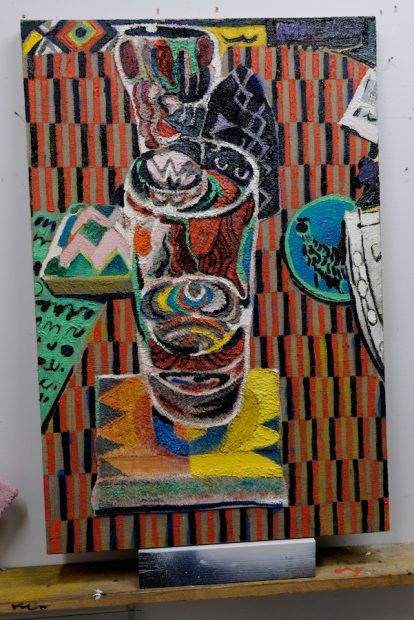 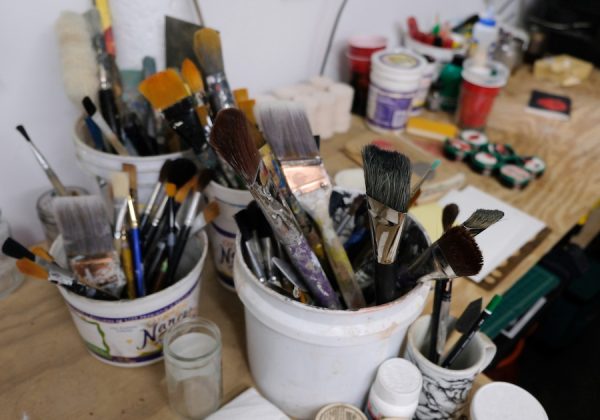 There’s always something to be deciphered in Liverman’s work. Curving lines and floating shapes glide together and drift apart again, suggesting scenes but remaining elusive. This tension between abstraction and figuration is especially apparent in Liverman’s oil paintings, which are made on rough, absorbent surfaces like burlap, denim, and towels. Liverman prefers these substrates because their thick, coarse fibers “lower the resolution” of his pictures. Unlike the artist’s smooth, flowing drawings on paper, his paintings push away from facility and precision in search of other paths to resolve the image. Liverman sees the two modes as “rigorously attached,” but painting provides more space for unpredictability and improvisation. 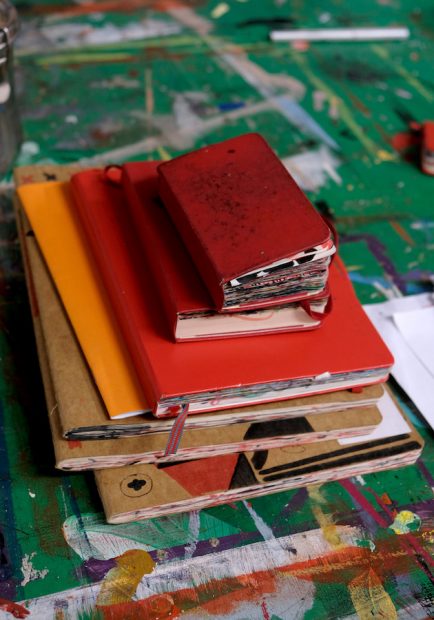 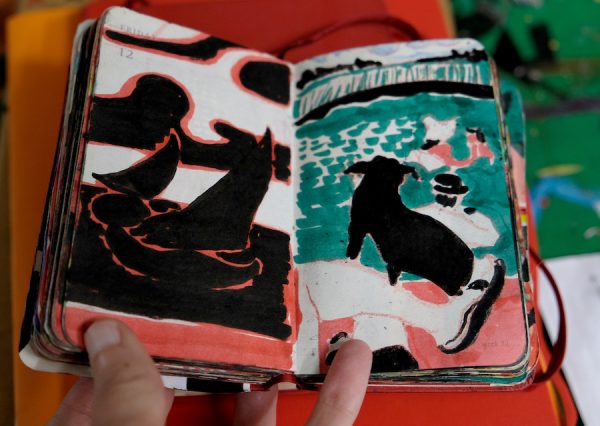 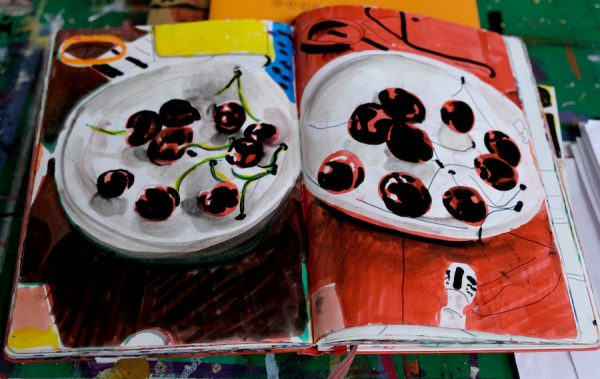 Self-imposed challenges are not new in Liverman’s practice. For a time he restricted himself to only working in red, white, and black in order to relay his ideas more quickly. The limited color palette appears across several of Liverman’s notebooks, which trace years of a committed, near-daily drawing practice. An arena for experimentation and amalgamation, each notebook page is a mix of observed and invented imagery. Flattened landscapes alternate with cartoonish picaros, Arpian forms fuse with manga, and a glossy plate of cherries morphs, by its third iteration, into a medley of pared down colors and lines. Liverman’s drawings explore the space between what he sees and what he thinks. But they also increasingly meditate on daily life. 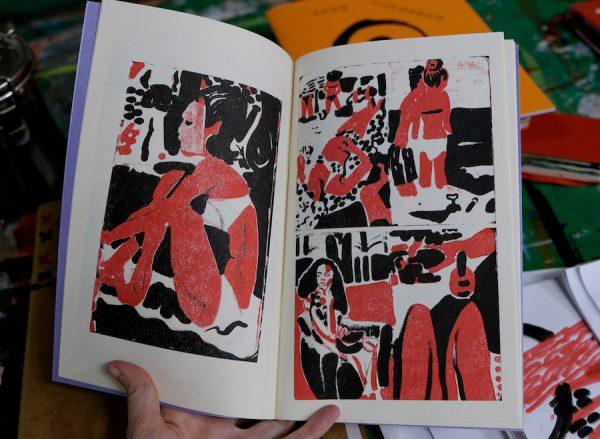 Observational drawing requires an immersion in detail. It’s an act of mindfulness that the artist says is “a way to appreciate the present.” Since the birth of his child, Liverman’s notebooks capture more moments from home. Domestic interiors provide the artist with a rich array of patterned fabrics and surfaces in the form of curtains, wallpaper, furniture, blankets, clothing, and rugs. The move indoors is in tune with predecessors like Pierre Bonnard and Édouard Vuillard, who injected distortion into decoration with their depictions of the domestic sphere. Beyond the family home, Liverman also focuses on recreation in nature. His prints and drawings of beach and Barton Springs bathers recall seaside paintings from the turn of the 20th century. 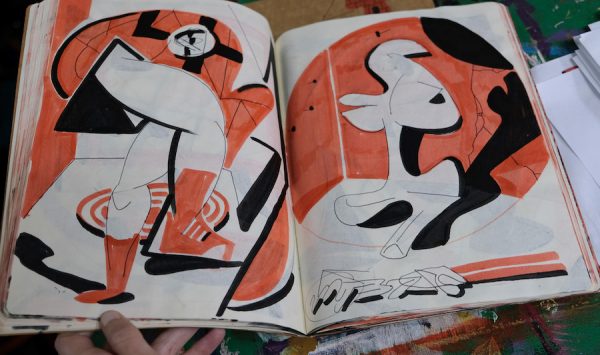 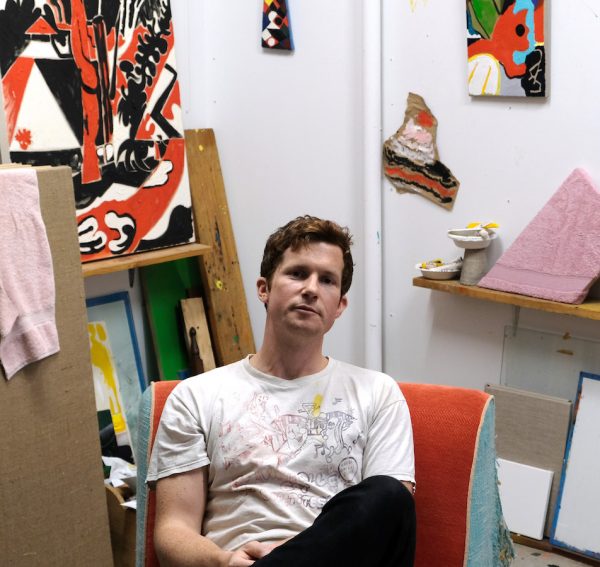 Back on Liverman’s bookshelf, Carl Jung’s The Red Book sits alongside an illustrated history of medicine. The two volumes embody the tension between imagination and observation that is so central to Liverman’s work. Influences as disparate as 19th-century French academic painter William-Adolphe Bouguereau and science-fiction illustrator Frank R. Paul reflect Liverman’s interest in creating fictions based in the familiar, in abstraction anchored by figuration. During the day, Liverman works as a designer, but he resists the idea that his professional life directly informs his art practice. For Liverman, the studio is a messy respite from the tidy restrictions of his job. Wherever it comes from, the artist’s masterful grasp of composition and color mean that his work makes visual sense, and never fails to draws us in. Wide-ranging influences have helped Liverman build his technique and aesthetics, but his work is undeniably his own.