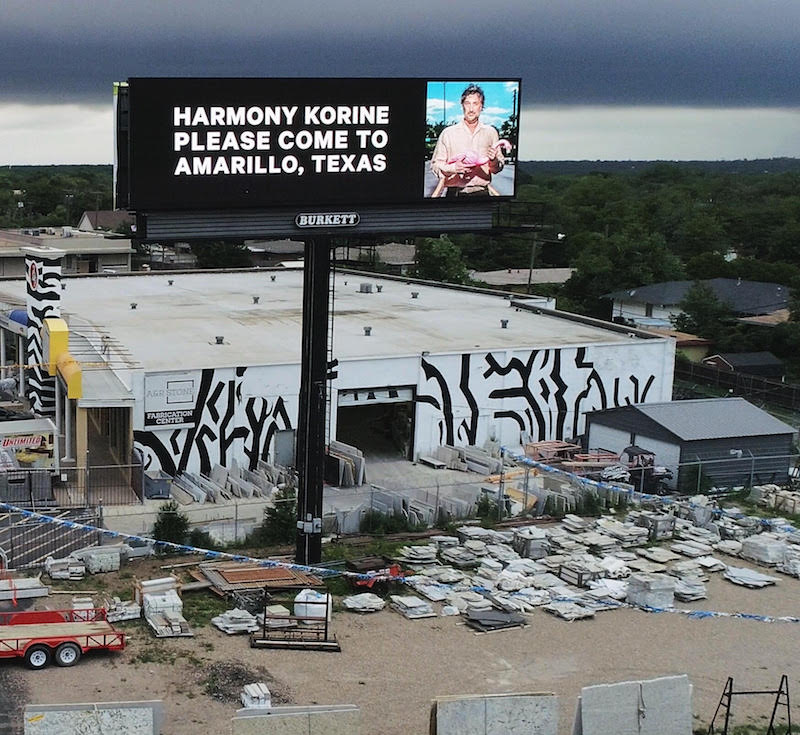 One of the two Amarillo billboards with Pedigo’s message to Korine.

Back in February, Glasstire reported on the Amarillo city council run of Hayden Pedigo, a young Amarillo native and noted musician, who kicked off his campaign last summer with a series of what appear to be absurdist conceptual art videos — ones that Pedigo himself admitted were inspired by the work of filmmaker Harmony Korine. (Again, Glasstire recommends the short videos for your casual viewing pleasure.)

On May 4, Pedigo lost the election to the incumbent (coming in second of four candidates). This week, Pedigo reached out to Glasstire about a couple of large digital billboards in Amarillo, along I-40, that he’s had emblazoned with a photo of Korine holding a lawn flamingo (the photo was originally shot for GQ), and the large text ‘HARMONY KORINE PLEASE COME TO AMARILLO, TEXAS.’

Glasstire spoke with Pedigo today. He has not paid for the billboards — the billboard’s owner is simply game for the time being — and he figures the owner will allow the message to stay up for a week or so (it went up yesterday). As of this writing, Pedigo is not planning on paying to extend the life of the message. And no, he does not think of this gesture as a terminal conceptual art project, although he doesn’t mind if others see it that way. He does hope to attract the attention of Korine, and would very much like for Korine to shoot a movie in Amarillo. When Glasstire points out that Korine hasn’t made the kind of movie we think Pedigo is envisioning since, say, 2009, Pedigo says, “Exactly!” He thinks an Amarillo movie could be Korine’s greatest work.

When Glasstire asks Pedigo how much time Korine would need to spend in Amarillo before being able to make a movie that’s set there, Pedigo quickly answers: “Three days.” Pedigo also stresses Amarillo’s “chaotic absurdity” as well as its “charm” and insists there’s no other place like it. He simply wants interesting things to happen in his native city.

Today, someone at Vice let Pedigo know that Korine has asked for Pedigo’s phone number.

The End of the Bad Boys

A Conceptual Art Stunt Leads To a Run...