[Sponsored] Tyler Vouros’ Tenebroso at Rockport Center for the Arts

by Betsy Huete May 15, 2019
FacebookTwitterEmail 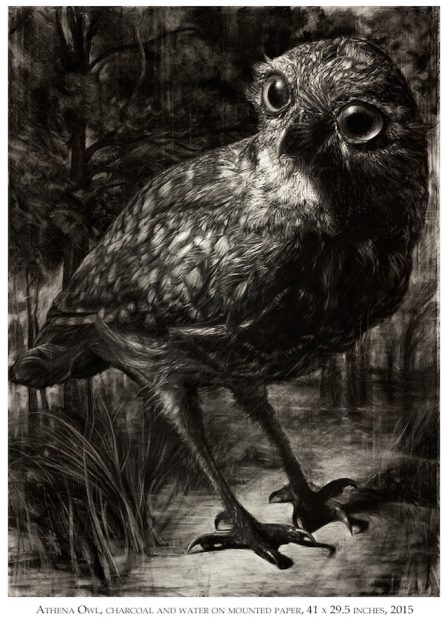 An owl focuses its eyes (as luminous as crystal balls) on the near distance, as if peering slightly beyond our left shoulder. The animal appears at once fearful and omniscient. The softness of its feathers, paired with its razor-sharp talons and beak, render it both welcoming and predatory.

Athena Owl (2015) is emblematic of Tyler Vouros’ impressive oeuvre. Vouros makes large-scale charcoal drawings of things in nature. Useful to understanding his content, however — beyond it being beautiful drawings of plants and animals — is also understanding Vouros’ modus operandi.

Vouros treats drawing as both a painterly and sculptural enterprise. Sculpturally, he engages in his drawing a subtractive method, by building up the surface with charcoal, then using erasers and sandpaper to carve out the luminescence in the work. The brightest highlights in his drawings are reveals of the original paper. He also, in a painterly way, mixes water with powdered charcoal to create a wash, with which he achieves his subtle gradations that differentiate between warm and cool, light and dark, and foreground and background. In using both strategies, his result is a kind of chiaroscuro effect, rife with quiet drama, and teetering between storybook wonder and the heightened precariousness inherent in the natural world. 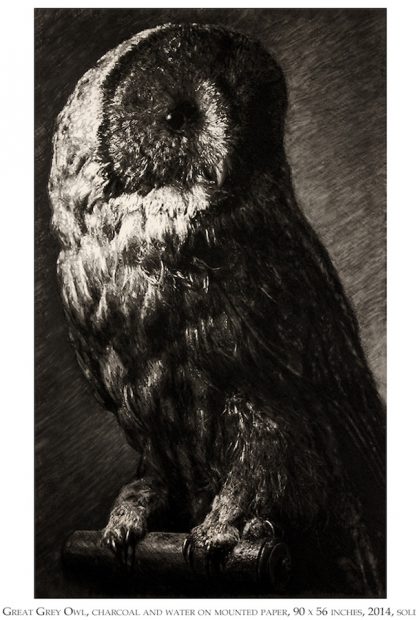 Vouros didn’t cultivate this process of evoking shadow and luminosity overnight. It’s taken years of experimentation, as well as a BFA from the University of Massachusetts Amherst, and finally, in 2011, an MFA from the New York Academy of Art — a program that Vouros says “kicked his butt.” It was the second semester of his first year at the New York Academy of Art where he started honing in on light and dark, and sculpturally manipulating the charcoal to unearth the radiance of the paper. In honing his method he came to realize that the push-pull between additive and subtractive methods didn’t refer strictly to light and dark, but also pointed toward greater tensions between detail and scale, abstraction and representation, subtlety and drama, and even life and death.

Elena Rodriguez, Curator of Rockport Center for the Arts, says of Vouros’ work: “The size and realism of Vouros’ work contribute to its magnificence. The microscopic, rendered on a macroscopic scale, envelopes the viewer in his macabre and majestic universe.” Indeed, blowing up a wilting sunflower to several times its size can have a wonderfully grotesque and gratifying effect.

Perhaps more crucially, it also circles back around to Vouros’s impulse to knit together interstitial push-pull relationships, namely to lay bare the relationship between abstraction and representation. What other forms can dead, dehydrated flower petals take on when they are magnified? Can they start to feel like tentacles? Or drifting pieces of fabric? Vouros states about drawing on a large scale: “A significant metamorphosis occurs when becoming encompassed with this work at an immersive scale; the transformation sometimes departing entirely from its original anatomy.” 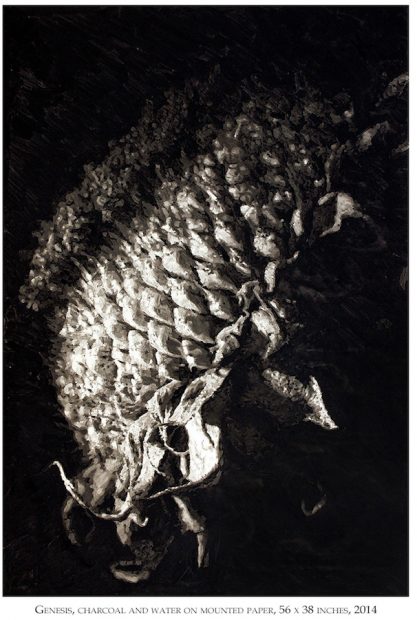 Since earning his MFA, Vouros has achieved notable success, having garnered a residency grant from the Villore Foundation in Leipzig as well as a sponsorship grant from MASS MoCA. He has exhibited in places such as the Leigh Yawkey Woodson Art Museum in Wisconsin, Collier West Gallery in New York, Flowers Gallery in London, Neue Leipziger Messe in Germany, Pier Sixty Chelsea, and Art Southampton. Vouros’ work has appeared in numerous publications, including the 2016, 2017, and 2019 Manifest International Drawing Annual; Artscope Magazine; Fine Art Connoisseur; and American Art Collector. His work is held in public and private collections internationally, and Vouros has done numerous commissions, including work for Chanel. After having spent time in New York City finishing his MFA as well as working as a copyist for the Metropolitan Museum of Art, he has since returned home with his family to Holyoke, Massachusetts, to teach and make drawings in his studio for commissions and shows — lately in particular for his upcoming exhibition Tenebroso at Rockport Center for the Arts, which opens on May 17.

Nestled on the Texas coastline, Rockport Center for the Arts is at once a nice fit and stages a lovely counterpoint for Vouros’ work. With Tenebroso — Spanish for the word “dark” — Vouros offers an intense antithesis to the light, beachy naturalism that surrounds the museum. The exhibition will offer a moody respite for those looking to escape the early summer sunshine.

But Rockport Center for the Arts isn’t simply showing Vouros’ work and calling it a day. True to its dedication to educational outreach, RCA extended the exhibition into a month-long residency for the artist, so that the public can access Vouros and understand and view firsthand his working process. Vouros, as Rockport’s seventh artist-in-residence, will put to work his experience as an educator, and lead workshops at Rockport-Fulton High School.

Vouros’ Tenebroso opens to the public at Rockport Center for the Arts on Friday, May 17. An opening reception will take place that Saturday, May 18, from 5 to 7 p.m. Vouros will deliver an artist talk preceding the opening at 4:30 p.m. The exhibition will be on view until June 14, 2019.