by Brandon Zech May 12, 2019
FacebookTwitterEmail 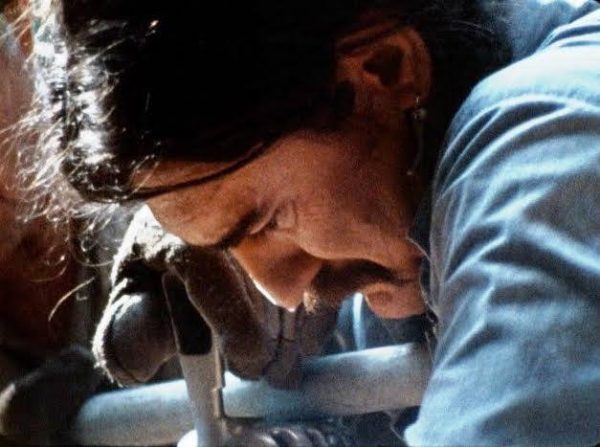 A still from Jackelope

On May 15, 2019, from 7-10 PM, in conjunction with James Surls: With Out, With In, a solo show of sculptures by the artist currently on view at the UMLAUF Sculpture Garden and Museum in Austin, the institution will host a screening of Jackelope, and a book signing by art historian Pete Gershon.

Jackelope, a rarely-seen 1975 Texas art documentary made by Ken Harrison, looks at the lives and work of artists who chose to make Texas their home. The hour-long film chronicles scenes of opening receptions from the Fort Worth Art Museum, the evolution of a large-scale wooden sculpture by Mr. Surls, and much more, as Peter Lucas noted in a 2015 review of the film for Glasstire:

“While Jackelope focuses largely on Surls, [George] Green, and [Bob] Wade, a number of other art notables are in the film. There is the enigmatic presence of artist Letitia Eldridge at an opening. We sit on the porch and look at slides with the late Chicano artist Mel Casas at his home outside of San Antonio. Mike McNamara, John Alexander, and a bunch of other artists are in there, as well as a brief appearance by Jim Harithas, then director of the Contemporary Arts Museum and a fairly recent transplant to Houston at the time.”

Following the screening, Mr. Gershon will sign copies of his 2018 book Collision: The Contemporary Art Scene in Houston, 1972-1985, which chronicles a formative period of art making in the city, of which Mr. Surls was a crucial part. You can learn more about the book by reading Christina Rees’ interview with Mr. Gershon, or by listening to Glasstire’s podcast with him, linked below.