by Brandon Zech May 11, 2019
FacebookTwitterEmail 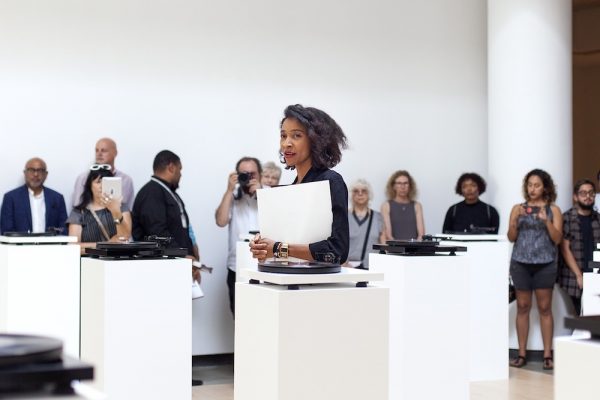 The May 31, 2019 deadline is soon approaching for the San Antonio Ethnic Art Society’s biennial Abaraka Awards. Open to African American women who are involved in visual art (ranging from art making, to curatorial projects, to art-related research and academic endeavors), the award is underwritten by patrons and collectors Aissatou Sidime-Blanton and Stewart Blanton, and is named for a word used by the Mandinka people of West Africa to express great thanks.

The inaugural $3000 award in 2017 was given to the Dallas-based multimedia artist lauren woods to execute her (Kind of) Bluebonnets project. In a 2018 article for Patron Magazine, Justine Ludwig wrote about the complexities of this piece by Ms. woods:

“(Kind of) Bluebonnets takes on the legacy of bluebonnet painting. The omnipresent Texas-specific art form captures the idealized landscape of cobalt blue that appears only briefly every spring. The paintings are romantic, often reminiscent of Thomas Kinkade, and feature barns and longhorns. Woods’ photographs draw upon this geo-specific artistic subgenre, but subvert the narrative. Bodies appear in (Kind of) Bluebonnets, specifically black bodies. Posed and contorted, they seem to sprout from the earth, organically becoming part of the landscape. Gesturally simple, the images are endlessly dense to unpack, presenting narrative threads of visibility, ownership, and representation. It has become a calling card of Woods’ oeuvre—an economy of visual language resulting in rich and complex commentary.”

Art And The Public Sphere: An Interview With...