by Brandon Zech May 5, 2019
FacebookTwitterEmail 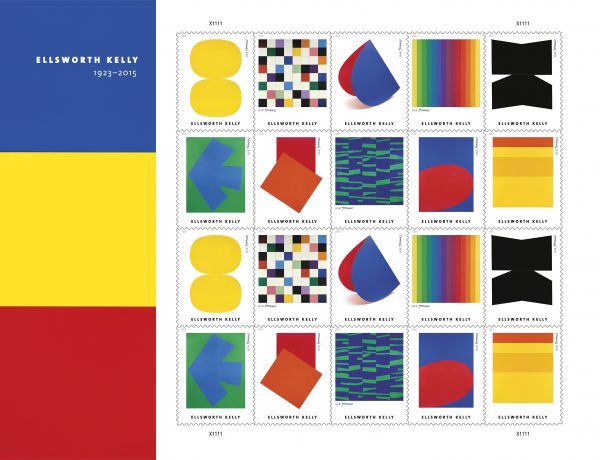 The U.S. Postal Service (USPS) recently announced that it will commemorate the life and work of American artist Ellsworth Kelly by issuing 10 stamps featuring paintings and sculptures by the artist. A pioneer of his time, Mr. Kelly was known for his artworks that focused on line, shape, and color. Because of the artist’s interests, his works were often bold and graphic in nature.

The release of the stamp set will be marked with a celebration at Mr. Kelly’s longtime studio in Spencertown, New York on May 31, 2019.

Mr. Kelly, who was actively making work until his death in 2015, is represented in numerous Texas public and private collections, including Austin, a building commissioned for the Blanton Museum at the University of Texas at Austin.

Since its inception, in addition to commissioning new designs of selected themes, the USPS has steadily reproduced images of preexisting artworks on its stamps. In 1998, the organization celebrated four centuries of American art by producing a stamp sheet featuring some of the country’s best-known paintings, including American Gothic by Grant Wood, Nighthawks by Edward Hopper, and Two Against the White by Charles Sheeler. Later, in 2003, the USPS published stamps featuring four paintings by American Impressionist Mary Cassatt.