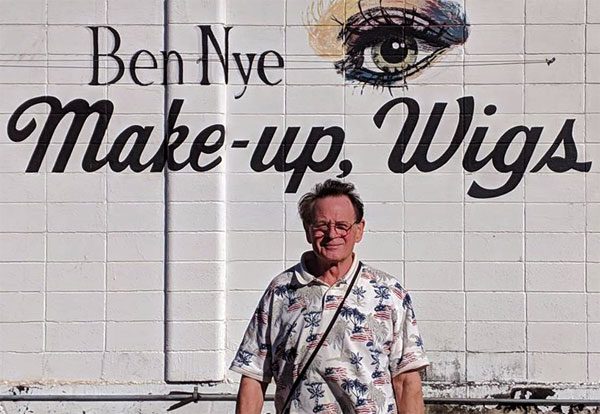 Gene Elder, a unique artist and activist in the San Antonio art and LGBTQ communities, died on Sunday after a bout with cancer. He was 69.

Elder was born in San Antonio in 1949 and attended Trinity University, receiving a Bachelor’s of Fine Arts. While at Trinity, Elder met Arthur “Hap” Veltman, who would be an integral friend and business associate for the next two decades. Elder managed the legendary gay disco San Antonio Country which Veltman owned. In the 1980s, Elder managed the Blue Star Arts Complex which Veltman had purchased in 1985.

Elder wrote in his journals of his time at Blue Star:

“I curated two exhibits, Artist As Administrator and Power To The Pulp, which was inspired after my years of working and teaching in the papermaking studio at the Southwest School of Art and Craft. I invited 30 artists who had never worked in paper to create a new work. The exhibit was at the Locus gallery at the Blue Star. Some of those artists were Anita Valencia, David Casas, Henry Stein, Mike Pogue, Suzanne Paquette.

“In 1989, Glenna Park curated the LOADED exhibit at Blue Star and I painted on 4 American flags. This was an interesting experience since it was during the time of national flag burning debates and whether the National Endowment for the Arts should be giving any money to gay and lesbian artists. You can imagine what that was like. And what was said. Patriotism was a hot topic.”

After Veltman died from complications from AIDS in 1988, Elder created and became director of the Happy Foundation Archives, which documented and preserved local LGBTQ history.

Elder also founded his own gallery, MUD; ran for mayor on the “Party Party” ticket in 1979; was crowned King Anchovy of the Cornyation in 1984; and kept extensive journals. In 2014, Elder donated his journals to UTSA’s Special Collection. In the last years of his life, Elder communicated mainly through email, sending his friends, city council members, national magazines, and celebrities lengthy messages on a variety of topics.

San Antonio writer Sarah Fisch says of Elder: “Gene was sometimes dismissed as a kook, which is a huge disservice. In practice he was that rarest of things — a tenacious and genuinely accomplished eccentric. I don’t know of anyone who lived more squarely on his own terms.”

Artist and UTSA professor Ken Little writes of Elder: “Gene was on the ground floor from the beginning, day one, building San Antonio’s contemporary art community. He was ‘old school,’ a jubilant, enthusiastic artist, and an integral supporter of Blue Star and all that has come to be.”

Fwiw, I never met Gene in person, but I still possess 319 emails from Gene, most but not all from his mass mailings. In addition to his other ventures, he founded “Political Art Month” (which afforded then-rare moral support for my own more politically-oriented work), and invented “RFID Art” and many other inspired and inspiring ideas. His emails were hilarious and graphically delicious, and always lived up to the MUD Underground motto, “Artists hellbent on taking over the world.” I’m extremely sad to know he’s gone; his legacy will be preserved in hearts and minds, and I hope also materially and electronically.