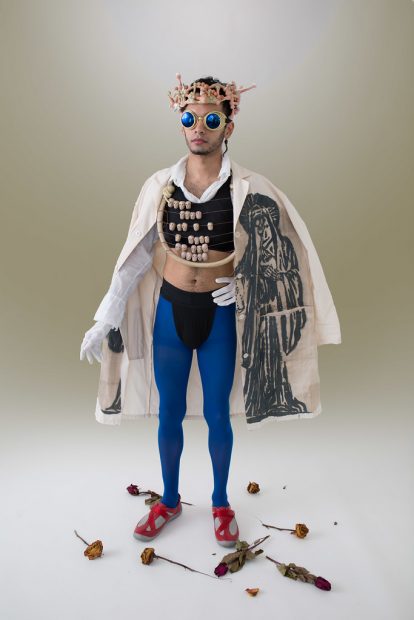 Houston-based artist Angel Lartigue has told Glasstire that they have been invited to participate in the SymbioticA residency, which is based out of University of Western Australia in Perth. Established in 2000, the interdisciplinary program reflects the collaborative spirit and disparate focus of its three founders: artist Oron Catts, cell biologist Miranda Grounds, and neuroscientist Stuart Bunt.

The convergence of art and science drives this program; by giving individuals from all disciplines access to lab workstations, technologies and equipment that are usually only available to scientists and engineers, SymbioticA hopes to forge new pathways for artists to create. Similarly, since the program is also open to researchers and scholars, it gives those individuals the ability think freely and pursue “curiosity-based explorations, free of the demands and constraints associated with the current culture of scientific research.”

Lartigue’s art fits into this interdisciplinary style of working. In past exhibitions across Texas, at venues including Fl!ght Gallery in San Antonio, and Box 13 ArtSpace and Gspot Gallery in Houston, Lartigue has performed the role of scientist, extracting DNA from audience members. Also in recent years, in light of their works’ focus on the human body’s relationships with the earth, Lartigue has taken bioanthropology courses to better understand the reality of human decomposition after burial.

In a statement to Glasstire, Lartigue commented on how they feel this program will help them further their practice:

“I never saw my work as bridging art and science but some Bio art movements from the 1990s have influenced me. What SymbioticA offers is first of its kind, a residency tied to the University of Western Australia in Perth, that invites not just artists, but historians, philosophers and other scientists that seek a space to ask questions and critically engage with the life sciences. Depending on their area of research, the resident is connected with the university’s departments, faculty, laboratories and resources without any background or expertise on scientific technology, that’s the point. It is about experimentation. As a first generation Texan, trans person of color without a high school or college degree this is super important, because it allows people to go through a different lead way into the scientific institutions even if its more temporal.”

You can learn more about Lartigue’s practice by visiting their website.