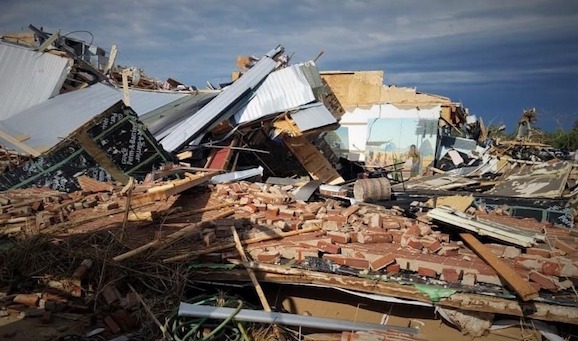 Image via The Caddo Nation

On April 13, an F2 tornado devastated the Caddo Mounds State Historic Site in Alto, Texas. It left one person dead and caused dozens of injuries. (Members of the Caddo Tribe were there that day for Caddo Culture Day.) Parts the site’s museum was destroyed.

Caddo Mounds State Historic Site is a Texas State historic site 26 miles west of present-day Nacogdoches. Via the Texas Historical Commission: “The Caddo selected this site for a permanent settlement about A.D. 800. The site was the southwestern-most ceremonial center for the great Mound Builder culture. Today, three earthen mounds still rise from the lush Pineywoods landscape, where visitors discover the everyday life and the history of this ancient civilization.” Caddo Culture Day is an annual event that celebrates Caddo music, dance and the work of Caddo visual artists and craftspeople.

(Recently, Glasstire selected the SFASU exhibition Caddo Nation: Still Here, Still Creating, Still Relevant as a Top Five pick: Guest host Joe Arredondo said: “This is the first time contemporary Caddoans have been shown in Nacogdoches… and it’s the first time that the Caddo have been exhibited in East Texas, where they were driven out of, and they were there for more than a thousand years before they were driven to Oklahoma.”)

Right now, the Caddo Nation has a GoFundMe for Caddo Mounds tornado tribal victims. “We would like to have a count of those affected and help where help is needed.” You can find the fundraiser here.