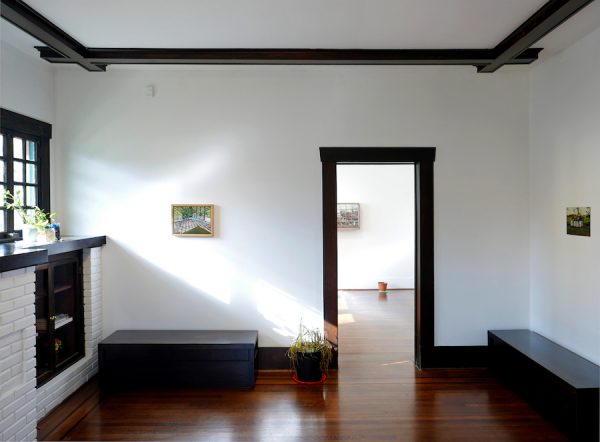 Installation view of Nuestro Hogar at Jonathan Hopson in Houston.

When you hear the word home what comes to mind? A place of safety? Of uncertainty? Does the word elicit a sense of belonging? Is it an abstract idea or a real place? These are among the questions explored by artists Francis Almendárez and Ana Fernandez (along with curator Debra Barrera) in the two-person show Nuestro Hogar at Jonathan Hopson in Houston.

Depending on our personal histories, our answers to the above questions and our understanding of this exhibition will be very different. We may feel nostalgia as we recognize fragments of our own past; perhaps sadness will creep in as we realize that neighborhoods change, buildings fall apart. We may feel curiosity as we are invited into a space that we are not used to inhabiting. As an immigrant from Mexico to the United States, I appreciate the title Nuestro Hogar. It is a declarative phrase in Spanish meaning “our home,” and it stakes an uncompromising claim on the exhibition space, holding within it the lived and bequeathed histories of both artists and curator. 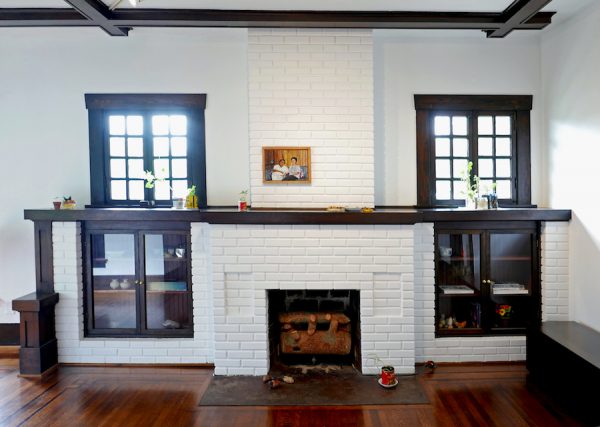 Indeed, the gallery is a home — that of Debra Barrera and Jonathan Hopson — with one half of the space dedicated to showing art and the other half to living. A small bungalow in Montrose built in 1914, the gallery provides an intimate setting that invites visitors to slow down and look closely at the work. The exquisitely restored hardwood floors, the grand fireplace, and profuse light streaming in through the many windows give way to the small paintings hanging on the walls, the television in the front room, and the potted plants carefully distributed throughout the two exhibition rooms. Initially, it might seem that there isn’t much to look at — but upon closer inspection, a lively conversation between the two artists emerges. 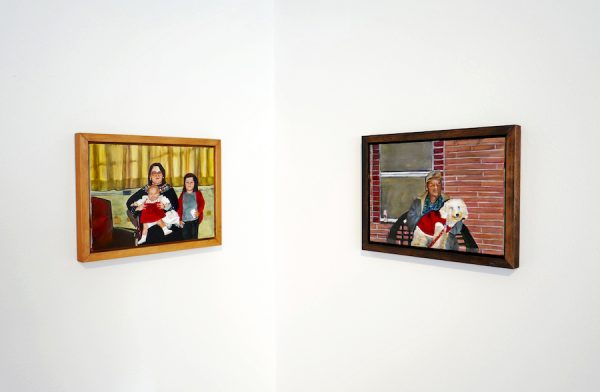 While Fernandez and Almendárez each have distinct visual languages, they share a curiosity for their cultural histories and the memories they carry. Using their own photographs as source material, they both create works of art that explore the built environment that surrounds them, and make visible parts of the world that usually remain invisible to casual observers. Fernandez draws you in to examine her small, intimate paintings of domestic interiors, family portraits and busy street scenes. Executed in a variety of media — oils, gouache, egg tempera, and an unexpected fresco — her paintings evoke the way in which memories are sometimes blurry and distorted, while sometimes they manifest in vivid and detailed flashes. In allowing the particular properties of each material to determine the visual qualities of her paintings, Fernandez alternately reveals and obscures details of her memories and surroundings. Her paintings are realistic, but by no means are they photorealistic. She embellishes, edits and distorts as she creates her visual stories, giving herself license to recreate a world she knows well and also to construct a world she wishes existed. 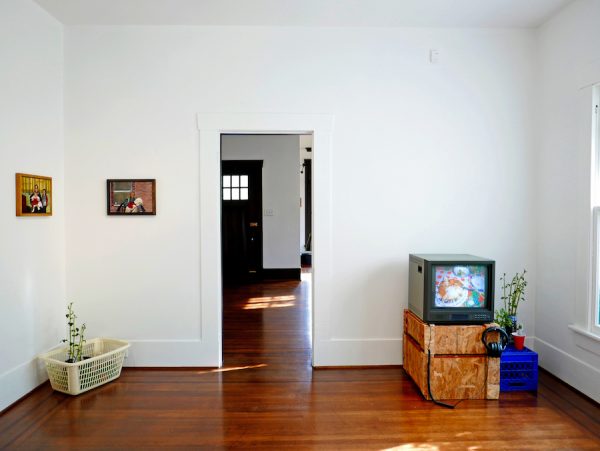 Almendárez’ sculptural video installations, each consisting of an old-school television perched atop a handmade packing crate, play slideshows of photographs taken and narrated by the artist. His soft voice ebbs and flows much like memory tends to do, crisp and distinct at times, lulling and comforting at others. (be)coming home, the installation located in the gallery’s front room, includes a rocking chair that once belonged to the artist’s grandmother, and extends an invitation to rest your body as you let yourself be transported by the video. Almendárez crafts a quiet meditation on the duality inherent in the eventual impermanence of buildings and the unexpected permanence of the immaterial products of our human existence — music, dance, food — elements integral to our cultural identities, yet often taken for granted. 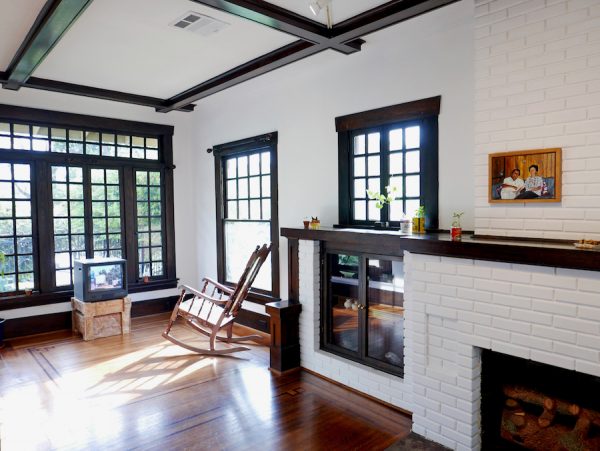 As he speaks on the soundtrack, Almendárez reflects on the relative value of buildings that at one time provided shelter but that eventually fall apart, while drawing parallels with human bodies that are only valued for the labor they produce and are forgotten once they are no longer useful. Similarly, his preoccupation with labor is reflected in the crates he built with his father. The wood he chose is composite lumber, the kind that is used to build houses in the U.S. Ironically, Latin Americans — the people who come to this country to work in the construction industry — aren’t familiar with this kind of construction material, being accustomed to cinder block, plaster, adobe or brick as the principal construction materials in their countries of origin. 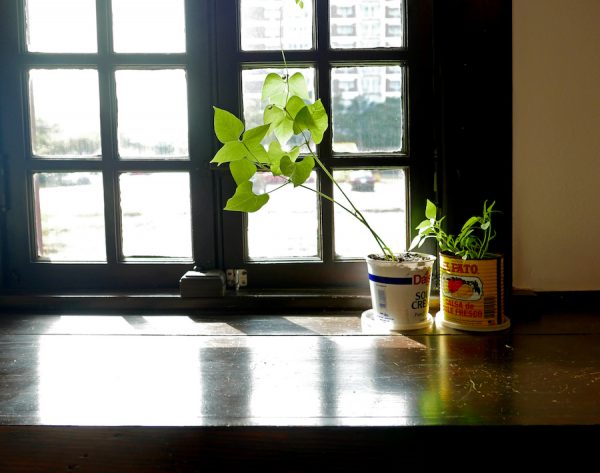 Work by Francis Almendárez (in collaboration with his mother)

Materials and how they are used, as well as the information that is embedded in the materials, emerge as a central theme in both artists’ work, prompting a playful dialogue between Fernandez’ paintings of potted plants, such as Patio and Quintana Road, and the actual potted plants in makeshift planters that are a part of Almendárez’ collaborative installation with his mother, which are titled Para el día de mañana. The planters are repurposed cans of Mexican salsa or plastic containers of American sour cream. They may contain sprouting potatoes, beans, or corn stalks. These are not decorative items. Rather, they are crops meant to be grown outdoors, for food. The inherent contradiction of these indoor crops makes me think that this is the small-scale re-domestication of once wild plants indigenous to the Americas.

The blurring of boundaries between indoors and out, between American and Latin American, between permanent and impermanent, is something that both artists accomplish with great skill. Together they create a hybrid experience, one that is rich with layers of information and full of delightful revelations for the careful observer.