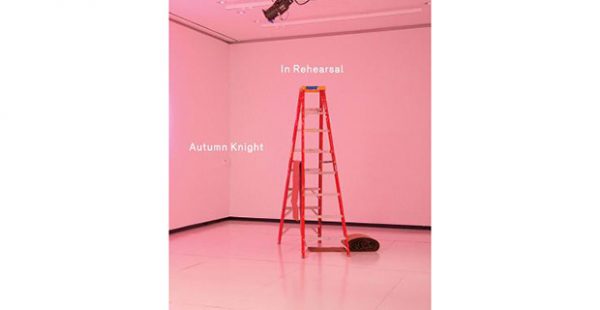 Reviewing Knight’s video piece that addresses the arrest, imprisonment, and suspicious death of Sandra Bland, Rainey Knudson wrote in 2017: “Part of the human experience is to feel out of control in our surroundings, where we are at the mercy of forces larger and more powerful than we are, whether they be authority figures, illness, systemic racism, the art world, or just bad luck. Knight’s video is a response to the feeling of being out of control — in her case, to the fearful acknowledgment that such a devastating fate could befall a woman her age, on a road Knight herself had driven so many times, so mundanely close to home. Directions to Prairie View is Knight’s lyrical effort to cope with — and even create something poetic out of — the tragedy and existential horror of a senseless death.”

Autumn Knight: In Rehearsal is the first comprehensive publication on the artist, who somewhat recently moved to New York from Houston, and is included in the 2019 Whitney Biennial. It includes essays from performance studies scholars Jennifer Doyle and Sandra Ruiz, and curators Amy L. Powell and Ryan N. Dennis, as well as a conversation between the artist and choreographer Cynthia Oliver. The book also reproduces Knight’s original performance scores and research notes, and documents her exhibition at Krannert Art Museum in the spring of 2017.

On Tuesday, April 16 at 7 PM at Project Row Houses in Houston, Autumn Knight, Ryan Dennis, and Amy Powell will read from and discuss the book. Admission is free, and copies of the book for purchase can be reserved in advance here.

Knight will also perform at the CounterCurrent festival with Robert Pruitt as the duo MF Problem. We Been Did That, on Sunday, April 14, is a survey of radical happenings, performances, and interventions from Houston’s black/POC arts community over the last decade. Free tickets can be reserved here.

Artists and Writers to Decide If They Have...