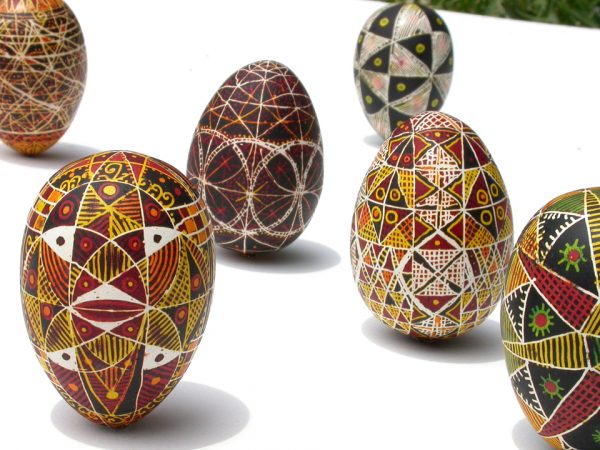 On April 7, 2019, from 2-5 PM, Houston artist Nestor Topchy will host a free workshop on how to make pysanka eggs. Made using a wax-resist method of dying, similar to that of batik fabric painting, the Ukranian tradition of pysanky goes back thousands of years.

The website for the Descent of the Holy Spirit Ukrainian Catholic Church, a small parish in western Massachusetts that was founded by Ukrainian immigrants, describes some of the pre-Christian mythology and symbols incorporated into the egg-dying tradition:

“Symbols found on the pysanka…include wheat or pine branches, which signify health; bowers and birds which stand for happiness and spring; the triangle, which in pagan times meant air, fire and water or birth, means death, in Christian times took on the meaning of the Holy Trinity. Hens and chickens symbolize fertility, roosters are identified with masculinity and strength, as are oak leaves. Deer are strength and prosperity; fish are symbols of prosperity as well but also of Christianity and infinite lines signify eternity.”

Drawing on his own Ukrainian heritage, Ms. Topchy has made the creation of pysanka part of his ongoing artistic practice. He learned the process of making the eggs from his mother, and has passed on the tradition to anyone willing to learn. Mr. Topchy and his apprentice in the pysanka technique, Adrian Jimenez , were recently selected for inclusion in Texas Folklife’s 2019 Apprenticeships in the Folk and Traditional Arts program.

Mr. Topchy’s workshop on April 7 will be located at Avant Garden Houston, and is free with RSVP to [email protected]