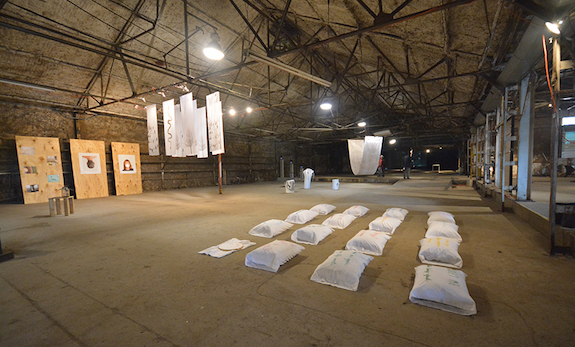 The Fire Marshal’s decision to deny Temporary Collectives its venue follows the recent history of the Dallas Fire Marshal’s office shutting down or blocking visual art events across the city.

Temporary Collectives has taken place each spring in a warehouse in the Trinity Groves area of Dallas, at 500 Singleton Blvd. The raw 30,000 square-foot building, owned by Dallas businessman-developer Larry “Butch” McGregor, has hosted many art events in recent years, including the Dallas Biennial.

Artist and UTA professor Stephen Lapthisophon founded the event (with the blessing of McGregor) in the 500 Singleton space in 2011. Before it was titled Temporary Collectives, the initiative was titled Bridged, and then The Consortium. Temporary Collectives (and its precursor editions) was launched in order to create a cross-pollinating exhibition and critical-dialogue opportunity for artists enrolled in the region’s various MFA programs. After Bridged, Lapthisophon was joined by fellow artist-professors John Pomara of UTD and Darryl Lauster of UTA, and others, to organize The Consortium and then Temporary Collectives.

The annual exhibition’s profile grew. Via UTA: “In 2015 the Nasher Sculpture Center came on board, providing support and outreach to their Avante Garde Society. The Dallas Art Fair generously supports free admission for all students to the art fair and has hosted our project’s panel discussion as part of their event schedule.”

According to Temporary Collectives’ organizers and McGregor, this year they were given the impression “a month or two” ago, via phone, that they would be allowed to hold the event again this year at 500 Singleton if they followed the protocol they followed last year, which was to hire an official from the Fire Marshal’s office to staff the venue during open hours — a standard procedure called a “fire watch.” A committee from the event sent Dallas City Hall a standard event permit application approximately two weeks ago.

McGregor called the Fire Marshal’s office yesterday, April 2, to check on permit status and ask about hiring an official for the fire watch, and was told by an official with the Fire Marshal’s office that Temporary Collectives could not open at 500 Singleton, that this decision had been made prior to his call, and the implementation of a fire watch was not an option. McGregor was then told that the Fire Marshal’s understanding was that last year was the final year of the Temporary Collectives show at the 500 Singleton location — something McGregor had discussed with officials last year in anticipation of razing the warehouse for new development.

Nonetheless, McGregor had been told by an official with the Fire Marshal’s office as recently as last month that the event could carry on in April at 500 Singleton with the implementation of another fire watch. As of yesterday, the office of the Fire Marshall denied any permit or fire watch option for Temporary Collectives, and refused to discuss the matter further.

To my Dallas friends: I hope you won’t mind my encouraging you to find out who’s running for City Council in your District, ask them for their position on this problem, and try to get commitments to fix it (e.g., could Council not create a commission with artists, gallerists, Code people, and a neutral lawyer, to draft revisions to the City zoning, building, and fire codes that would create the categories needed, so exhibition spaces can be safe but don’t have to meet the requirements for a bar or whatever? Plus provisions for timely City responses and expedited appeals?) Let ‘the candidates know you’re talking with others in your District about this, and vote.

Thank you, Carolyn, I will make a phone call tomorrow morning. This is distressing & cannot continue!

The real problem is the fact that the organizers of this event did not get approval from the fire marshall before inviting 50+ students to participate (dedicating countless hours to create SITE SPECIFIC work, as per the request when submitting proposals). Instead, the organizers waited until the last minute to find out. Students found out two days prior to the event, many after installing their work. The only way we found out was word of mouth. The organizers of this event had no regard for their students, but rather wanted to hide behind the fire Marshall’s decisision in order to deflect the attention from themselves. They wanted us to keep our mouths closed for the sake of being polite, as they did not have the respect to even issue an apology to students.