RIP to the 30th-Century Man 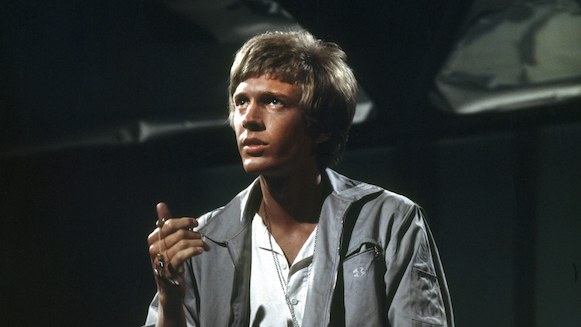 When I got married, I insisted, in a bit of youthful pretension (I was 23) that our first dance be to the Scott Walker ballad Duchess. It’s a sad song and was a bit of a harbinger of things to come (I’m no longer married), but it’s still one of the most beautiful songs I’ve ever heard. Walker takes the well-worn, lost-love ballad, and with his mahogany baritone and loping, low country arrangements, turns it into something like a myth sculpted in Greek marble.

Scott Walker died last week at age 76. In this hell world, cool icons like Walker, and Mark Hollis of Talk Talk (dead at only 64!) — who appeared lithe and healthy — are cut down, while ghouls like Henry Kissinger, who resembles a blue meanie from Yellow Submarine, saunter on to the next hollow ceremony. Like David Bowie (who was greatly influenced by Walker), Walker kept pushing himself creatively. His last spate of albums are some of the most challenging and adventurous a singer-songwriter has ever made.

Born Scott Engel, Walker rocketed to fame in the early ’60s with his band the Walker Brothers. (They weren’t brothers.) A proto boy band, the Walker Brothers achieved international fame with their stone classic The Sun Ain’t Gonna Shine Anymore. Instead of the usual rock-star path of too-young fame, then some sequence of addiction, then religion, and then kitsch, Walker was deeply influenced by the chanteur Jacques Brel, and so zagged into avant waters, creating a series of albums in the ’60s and ’70s that were devastatingly gorgeous and archly melodramatic. He sang about Stalin and dwarves and giants with an understanding that the brutality of the 20th century was absurd, and to recognize that made one more human. He had a wryness about fame and mortality, and took his art completely seriously but the concept of himself  — “the artist” — as a character in one of his songs to be interrogated. Consider the lyrics in one of his most beautiful songs, Joe: “A postcard from Sun City/Was found layin’ by your side/A kind of desert place/Where old folks dry away/You gazed out through the window/At the wonders of the sky/As if it were the first time every day.”

The Walker Brothers re-formed in the late ’70s and released a low-key revolutionary album Nite Flights, which was a significant influence on everything from David Bowie’s Low to the sonic worlds of Twin Peaks. In 1984, Walker released Climate of Hunter, a famously low-selling and delightfully strange album of existentialism coated in a slick patina of ’80s production. Any of the songs could be used to great effect in Michael Mann’s movie Thief.

Walker never really left England, and after the failure of Climate of Hunter, he took an 11-year hiatus before returning for one of the most remarkable final artistic acts in memory. Starting with 1995’s Tilt, this series of albums and soundtracks are uncompromising, heady, and bleak. They could be called Artaud-like “albums of cruelty.” Walker used sides of beef for percussion, and other horrific found sounds. The “songs” involved unsettling tableaus of barbarism, evil, and madness. If you play these albums in the presence of your dog, he will probably howl in fear. But at their best, these works become something much more than experimental masochism, as in Farmer in the City off Tilt, an elliptical and arresting narrative on the death of Pier Paolo Pasolini by a 17-year-old male prostitute. The sweeping song, filled with unlikely allusions and references, is a miniature epic — a true eulogy, endlessly evocative and haunting. It is fairly certain that there will never, ever be another like Walker.

The 2006 documentary 30 Century Man is an excellent introduction to Walker’s history and now legacy. It includes footage of him recording his follow up to Tilt, including his percussionist punching said slab of meat. Evan Parker also appears in the film, which is a nice surprise.

I “discovered” Scott Walker only a few years back, when listening to a Mixcloud channel out of Romania. I normally jot down a note when I hear interesting music, but when heard “Herod” off of Walker’s last album with Sunn O…his vocals “she’s hidden her babies away” juxtaposed with the drone sludge power chords sent me straight to youtube for a closer listen. Since then I’ve had his deep catalogue of work to check out and yes, I agree, his work since “Tilt” is fascinating music which I truly enjoy diving into, but love it or hate it his disciplined no compromise pursuit of and crafting of his own singular musical vision reflects serious buttloads of artistic fortitude that’s absolutely inspirational.