PechaKucha Comes to the San Antonio Museum of Art 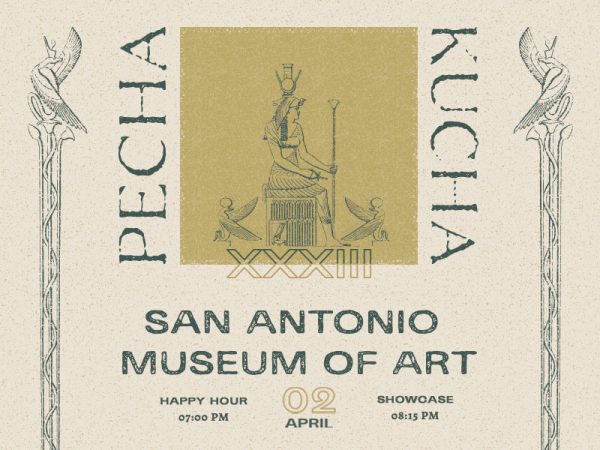 PechaKucha has announced that the 33rd edition of its San Antonio event will be hosted by the San Antonio Museum of Art on April 7, 2019 at 7PM. Started by architects Astrid Klein and Mark Dytham in 2003, PechaKucha is a lecture series designed to give artists and other creatives a shot at selling themselves and their work, but with a catch: each presenter can use only 20 images, with 20 seconds to talk about each image, meaning that the presentation needs to be well-organized and rehearsed.

Since 2003, more than 1000 cities across the world have run locally organized PechaKucha Nights as platforms to showcase their cities’ talents. The most recent PechaKucha Night in San Antonio, which occurred in December of 2018 at the Tobin Center for the Performing Arts, featured talks by Alex Paredes, Robert Rivard, Kelly O’Connor, Justin Parr, Naomi Shihab Nye, and Elizabeth Johnson.

Its upcoming event will be co-hosted by Mr. Parr and Randy Beamer, and will feature six of the city’s creatives:

Tickets for the event are $5 and can be purchased here.