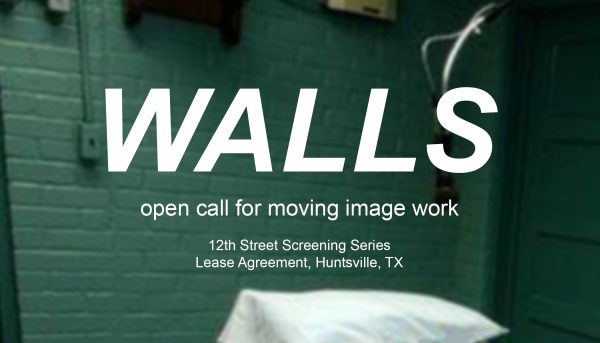 Hunstville, Texas could be called the prison capitol of the United States. There are seven prisons in Hunstville: Byrd Unit, Ellis Unit, Goree Unit, Holliday Transfer Facility, Huntsville Unit, Walker County Jail, and Wynne Unit. The Huntsville Unit, also known as the Walls Unit, houses the most active execution chamber in the United States. It was also home to Texas’  “Old Sparky” (1924-1964; 361 executions).

Lease Agreement is a nomadic curatorial project based in Huntsville, run by Adam Farcus (it’s a continuation of a space Farcus co-ran in Baltimore from 2013-2015). Lease Agreement has organized shows of works by such artists as Sky Hopinka and Liz Rodda, and right now, Lease Agreement is hosting an open call for moving-image works by artists and directors that speak to the realities and experiences of incarceration, and a specific request for moving-image works that address themes around prison justice and capital punishment.

Artists and filmmakers who are 18 or older are eligible to submit. To submit a video, email the following to Lease Agreement director, Adam Farcus, at [email protected]:

This screening program, titled Walls, will be held on April 29th at the 12th Street Bar, which is located two blocks south of the Walls Unit in Huntsville.