The Way You Make Me Feel: Jibade-Khalil Huffman at Ballroom Marfa 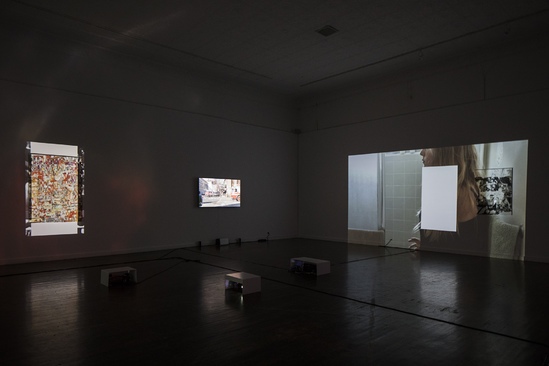 Last Friday, a 28-year-old Australian man, an “edgelord” or “shitposter” who lived in the extremely fetid online swamps of 4chan and deep reddit, strapped a GoPro camera to his head and gunned down 50 people at two different mosques in Christchurch, New Zealand, only stopping to go back to his car and reload. His GoPro video was streamed live to Facebook and quickly archived to racist and nihilist websites, where pitiless bigots commented with things like: “watched 8 times already.” The shooter left behind a “manifesto” that was chock full of inscrutable “jokes” and meta references — the only apparent sincerity an inflamed fascistic white nationalism.

A troubling number of responses to this tragedy range from outright foaming glee (check the comments sections on Breitbart, the National Review, or the American Conservative) to a wretched equivocation by a hideous Australian politician named Fraser Anning (who was egged in the head by a brave and insouciant little ripper), to the gross hedging by the once-moderate gay cultural critic Bruce Bawer, and Texas’ own Louis Gohmert. “The motivations are understandable…” this line of reasoning goes. There is an ambient feeling, like the ion charge before a thunderstorm, that actualizes itself more acutely now and again. We live in a self-made hell, or at least some iteration of it, where human limitation is sometimes spectacularly illustrated by human response to “advancement.”  Steven Pinker and Bill Gates love to point out that the global life expectancy is longer, but the spoils of innovation and advancement are shared by a tiny fraction of a percent of the population who live like god emperors outside of morality or consequence. The internet had the potential to be the greatest democratizing and egalitarian force in history, but instead is often a particularly virulent conduit spreading paranoia, disinformation, and bigotry. The eschatological crisis of climate change can only be solved by an unprecedented global cooperation; instead, it seems, we are receding into hard-bit ethno-nationalism.

It’s important to dream of a better world, but it seems so very far away. And thus (at least for me), art becomes more essential as a solace. There are two primary modes for art to currently feel vital — to either process this fresh hell, or to transcend it — to provide a kind of social contract for witnessing, or a crack in the prison wall for an escape. Some forms of satire — of say, the broad, jokey sort branded by Jeff Koons — seems not just irrelevant but basically impossible. Satire is very difficult when we live in a world where the president stands grinning behind a mountain of fast food, as if an Adbusters cover came to life.

Jibade-Khalil Huffman’s solo show, The Way You Make Me Feel, on view at Ballroom Marfa though the end of this weekend, slides between process and transcendence like a lever on a mixing board. The central piece in the show is the short film grimly and relevantly titled First Person Shooter. Like Ryan Trecartin’s works, Huffman’s First Person Shooter approximates a youtube tutorial aesthetic (briefly) before quickly fluttering into a hyper-associative, symbolic mania. Utilizing a kind of Grand Theft Auto/The Sims animated design style, Huffman creates an unsettling, dissociative rhythm — Coke cans explode, pills flood the screen, cop cars e-brake in to arrest non-white people. In one particularly memorable sequence, the animation becomes a first-person shooter frame; you’re firing a sawed-off shotgun during a steady rain of fedoras. Text flashes: “When people say this cocaine this war is everything they mean that it provides A convenient spectacle as well as the chance for unrelated advancements.” Throughout the film’s live-action parts, people “wake up” from the animated reverie. Are they coming to or slipping back in? It’s a parabola ad infinitum. First Person Shooter captures this bleak fugue state: there are samples from popular songs, Chappelle’s Show, movies like Juice — these drift in and out around the seemingly self-generated animations. This is the future for sure — more chaotic and disorienting than any science fiction could imagine, yet depressingly ancient in its orders and prejudices. Watching First Person Shooter, like Thor Johnson’s Machine-Gun Nose, isn’t exactly enjoyable, but it does unlock something, like a code, or the playing cards used to activate Lawrence Harvey in The Manchurian Candidate. 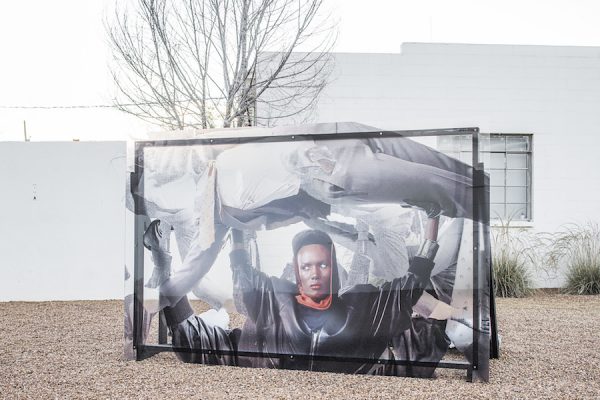 Huffman’s installation in Ballroom’s courtyard provides a fantastic counterpoint to the deeply cerebral and dispiriting process of First Person Shooter. A large light box uses sunlight to illuminate a film still of Grace Jones hoisting Roger Moore above her head in the mid ’80s Bond movie A View To A Kill. The image of an absolutely righteous black legend lifting the helpless and most colonial of Bonds, lit by the rays of the sun, is elementally inspiring. Grace Jones is one of those rare people who seem to walk without fear, wide awake in her own dream. 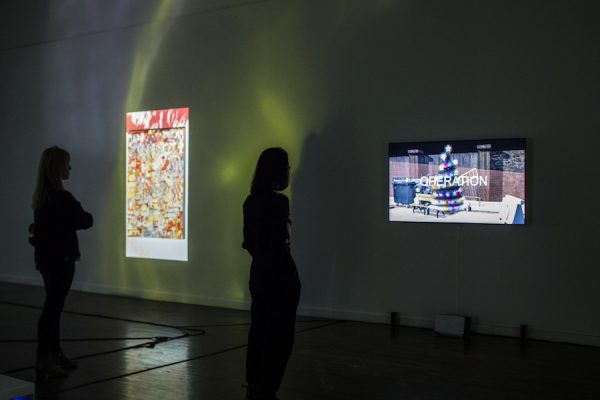 The cultural detritus collected in First Person Shooter creates an all-encompassing morass that’s reflected in other interior kaleidoscopic works by Huffman in this show. Huffman expresses how culture works as a trap, a panopticon that spirals like the Borges idea of the library of Babel — its speakers blaring the propaganda of control. But there are flickers and stills in this jet stream—like the image of Grace Jones —that can become almost a religious icon to fix on, to keep the faith.

Capitalist Consumption: the Institute for New Feeling at...