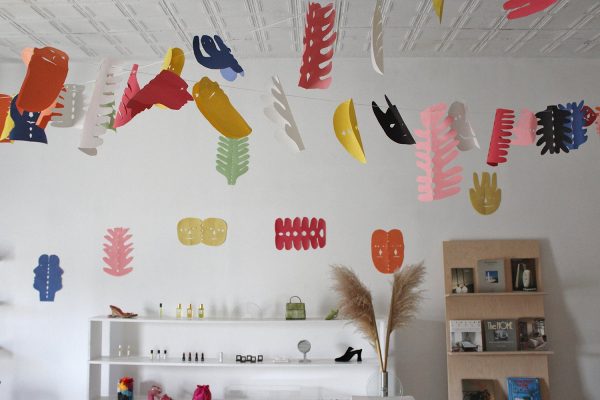 This weekend, on Saturday, March 23, 2019 marks the closing celebration for Las Cruxes’ brick and mortar space in East Austin. Founded by Veronica Ortuño, the store has played many roles in the city’s creative community: boutique, art gallery, record store, and a community and gathering space.

For a stint, Las Cruxes shared a building with the indie bookstore Farewell Books. Then, when Farewell closed in 2017, Las Cruxes temporarily stayed put, but ultimately moved to 12th street, down the street from the new location of Austin art space Northern-Southern. In this new location, Las Cruxes hosted shows by Ana Esteve Llorens, Ashley Thomas, and Andy Coolquitt. In its location alongside Farewell, the space exhibited works by Charles Zhang, Kevin McNamee-Tweed, and many others.

Las Cruxes is celebrating the closing of its physical location with Songs of Longing Flowers, a give-away show of works by artist Emma Kohlmann. The venue says that the works are inspired by Henri Matisse, and act as “totems of universal hope, love, and happiness.” Ms. Kohlmann recently served for a week as UT Austin’s Guest Artist in Print. During her time in the city, she also lectured at Women & Their Work, and recorded an episode of Humor and the Abject with Austin-based artist and podcaster Sean J Patrick Carney.

Catch the reception (and store-closing celebration) for Songs of Longing Flowers on Saturday night, March 23, from 7-10 PM. For more on Ms. Ortuño and Las Cruxes, listen to the podcast and watch the video below.

The House and Universe of Ashley Thomas at...