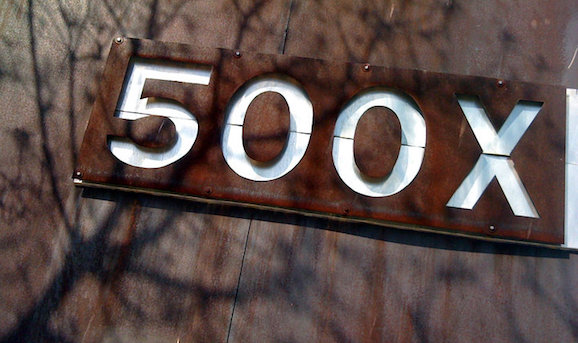 The long-running 500X Gallery in Dallas celebrates its 40th anniversary with a major  group show opening March 16. The oldest artist-run cooperative space in Texas, 500X opened in 1978, and has always been located in a circa-1916 former tire factory and air-conditioning warehouse at 500 Exposition Avenue in Expo Park, on the edge of downtown, Deep Ellum, and Fair Park. 500X has more than 3000 square feet of exhibition space and often hosts three or more concurrent exhibitions.

500X was co-founded by artists Will Hipps and Richard Childers “with the goal to provide a space for artists to exhibit freely from outside influences and dealer restrictions.”

500X has hosted shows by many of DFW and Texas’ notable artists, including Vincent Falsetta, Otis Jones, Nic Nicosia, Frances Bagley, Tom Orr, Frank X. Tolbert, Randall Garrett and Celia Eberle. Throughout the year, 500X hosts shows by its member artists and by guest artists, as well as a juried show chosen by a guest curator, and a un-juried open show.

The 40th anniversary group show, titled This is 40, will feature works by more than 56  gallery alumni (1978 – 2018), who will come together to share their latest work and celebrate 500X. Exhibiting artists include:

UPDATE: Two Things You Should Know About 500X...