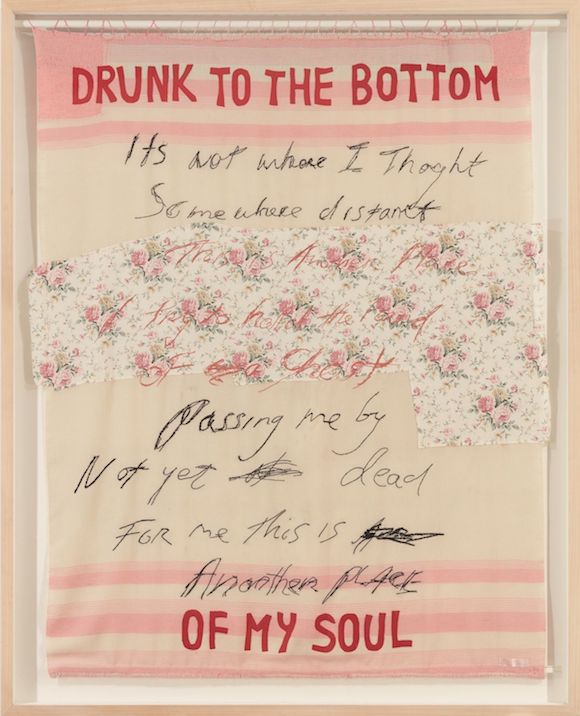 Tracey Emin, Drunk to the Bottom of my Soul, 2002. Courtesy Christie’s Images Ltd.

This month, much of the art collection of the late pop star George Michael will be auctioned through Christie’s headquarters in London, through both live and online sales. George Michael, who died in late 2016, amassed much of this collection within the context of the Goss-Michael Foundation, the Dallas-based 501(c)(3) outfit that Mr. Michael co-founded with Texan Kenny Goss in 2007.

Much of the collection up for sale is contemporary British art, including works by many YBAs (“Young British Artists”) that the Goss-Michael Foundation focused on collecting and exhibiting in its various spaces in Dallas. Most of the sale proceeds will go to charities that Mr. Michael supported in his lifetime.

Goss Gallery opened as an intimate commercial space in 2005 on Cedar Springs Rd in Dallas before becoming the Goss-Michael Foundation in 2007. In 2010, the Foundation relocated to larger, renovated warehouse space on 1405 Turtle Creek Blvd in the Design District, and then, in 2016, to another Design District space at 1305 Wycliff Ave (its current location).

There are more than 150 lots in the upcoming auction, including works by Damien Hirst, Jake and Dinos Chapman, Tracey Emin,  Sarah Lucas, and Michael Craig-Martin. (Also on the block: a major work by Angus Fairhurst that Glasstire’s Christina Rees wrote about in an essay in 2015.)

In the meantime, the Goss-Michael Foundation in Dallas is prepping for its ninth annual MTV Re:Define charity gala, which this year takes place on March 29 at the the Statler Hotel in downtown Dallas. This year’s honoree is YBA Marc Quinn. Rita Ora will perform. Proceeds go to MTV’s Staying Alive Foundation, which “is dedicated to dedicated to stopping the spread of HIV among young people.”