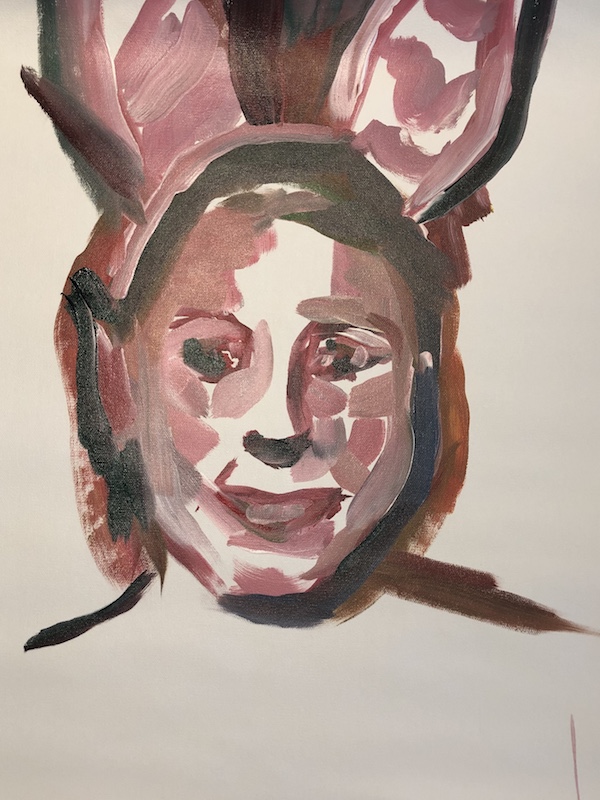 Once, while Blizard was teaching art at Texas Tech, we sat drinking watery coffee in a bakery. She told me I needed to move somewhere away from Lubbock. Somewhere bigger. I told her I wanted a chicken coop. She ignored that and told me I’d have to be some kind of genius to make it as an artist.

I think about that conversation often.

I sell work on Saatchi Art Online, which we all know is shorthand for “slightly desperate.” And I’m not supposed to talk about it yet, but a major retailer that rhymes with Smanthropology is selling prints of my paintings this fall. I wonder if this would irritate Blizard. She tends to cooly ignore institutions in favor of making her performance work in person, at UFO festivals and in parking lots and on sidewalks and billboards, and inside cars and flea markets, and oh my god, even directly on Instagram. But institutions should, and do, want her work. All the while she seems to have genuine fun, be it while wrestling,  puppeteering or just walking. For her, it’s all art and life.

But Blizard has told me she’s glad I’m selling work, that maybe that’s the way I get into a museum collection someday. She’s unnervingly un-ironic in her love of painting. She frequents museums and even offers certain paintings acts of devotion, like bouquets of flowers. She commissioned high schoolers to paint her portrait while she was in her android Elle Fanning mask, holding her Lyotard puppet. She remarked that the paintings were almost too good.

She painted portraits from Facebook one summer. I reposted the one she did of me, and my grandpa thought I painted it. He commented: “The right direction!”

If I sound resentful, I’m not. In my devotion to Blizard, I feel touched by her greatness. Maybe something even bigger than that.

Not long ago, she commissioned me to write about her work. It was exhausting to look at her oeuvre, much less imagine doing all that shit. She has insane energy. She once (that I know of) sent in an audition tape to the TV show Survivor. Even if this was a performance for her, I think it was also earnest. I’d kill to see that tape.

For me, the hardest a thing about Blizard is that she doesn’t explain herself. I think I’ve blown her up to mythic status. I’m not sure what I know of her is even real. Surely she has ugly or arrogant thoughts about other artists, maybe even her about own superiority. That’s the thing though, even when she is being a shamanic DJ, or riding around Burning Man in an oversized Katie Couric mask — she doesn’t seem to be mocking anyone, really. She inhabits these frothy cultural things the way Andy Kaufman did. She’s weirder than Kaufman. Jim Carrey, too. Like a stand-up comedian, she finds her audience. She is recorded, revisited. Then she flies the coop.

She is a fervent believer in art and artists, monastic in her focus even if her gaze shifts over the cultural landscape. She once laid out the reasons, in great detail, of how she is the reincarnation of Vincent van Gogh. It has something to do with her name, Blizard. Something about the Blizards who married the Foggs (of the Fogg Museum at Harvard). They have two Gs and she has one Z. I know it doesn’t make sense as I type it, but I believe in her. She reads theorists like their words are treasured personal correspondence — messages to her from her old friends. I marvel at how she, too, changes my understanding of the universe.

When I was her teaching assistant, I stole her demonstration paintings. I still have them in my studio, talismans to ward off my bad art, my bad instincts… as if that were enough.

I don’t have chickens anymore. I have a kid, though. And I did move. A lot of places, but recently back to my hometown in New Mexico. I’m starting over at square one. I’m painting from family photos. I’m good at rendering now, but I have a suspicion that my best work comes from collaborating with others — meaning, giving someone else my work to tear apart.

Christie Blizard is the devil on my shoulder, nudging me and whispering: “Destroy it.”

Christie Blizard’s March 2019 appearances include Sinusoidal (the milkmaid) at the Museum of Human Achievement in Austin, Texas, on March 1, and a performance in Denver, Colorado at Peralta Projects on March 15.

As my committee chair in graduate school, Christie challenged my thinking in ways I still can’t fully understand. I do remember one statement she made in class. She told us “most of us would stop making art in the future, that most of us would not even notice when it happens” till this day, I strive to prove her wrong….

Dean,
Choose your mentors wisely. Especially if they wear a mask. If Blizard really wants you to ‘destroy it’ then why doesn’t she destroy the out dated notion that you have to be in a ‘BIG MARKET’ to make it. Blizard’s work plays with cultural debris, but turns it into more detritus. I’m glad it’s free because I don’t need any of it. I’ll take some eggs from your chickens over a puppet show any day of the week.
Plunket

I’m experiencing the same thing myself. Me. Utopia. The grrl most likely Not to everything.

I was there, basically doing Nothing but doing a lot of talking. Nobody was listening of course, not even myself. There were a few glimmers of something in my work but nothing concrete- no direction, no focus, no stamina, no voice.

Then Adam Knoche came to Brookhaven College from Greenwich House, NYC. A staid dowdy stodginess just ripped away. Air got in. Students that haven’t done anything new and different in 20 years started doing fresh looking work for the first time. Some didn’t ‘notice’. Most didn’t attribute it to Adam- their egos wouldn’t let them. But I saw it clearly.

I started to see a lot of other things in that revelatory way reserved for drugs, death experiences, and miracles.

For one thing; Adam saw something in ME.
He said I could. He said Yes. He said I was the one who stood out. He said my work could be on a national and international platform, it was worthy of being seen and recognized. Suddenly I Woke. I went from sitting in the parking lot drinking diet cokes to going to the studio and making work- lots of work- work. Work with meaning and my guts in it. I was thinking about work, dreaming about work, sketching about work, journaling about work, aching to make work. I started to get into prestigious juried shows and build my exhibition record. I wanted to talk about work, talk about other people’s work, write about other people’s work; to share what I saw and didn’t see, share what I felt and didn’t feel.

Adam Knochie’s own work was as important to my learning process as his words of encouragement. It was rough, primitive, yet eloquent and elegant. It was Fearless, risky, it soared and it fell, and when it fell he just kept going and going til it worked. He has a very full life; wife, children, family, demanding job. Yet he never stops making his work, sketching, writing about his thoughts and ideas, entering national and international shows (he was a Ceramics Monthly Emerging Artist in 2018, got into the impossible to get into Korean Biannual 2019).

I often feel like I’m moored out on the Texas prairie somewhere…far from where Art is happening. I dunno how it happened; the sky cracked open and the beam of light found Me. It probably was meant for someone else. I know in Adam’s teaching career there will be many others who feel the holy shit Wow.

I have my first mentor. And I’ve been in mourning since our first talks and feedback critiques because I know he and everything he brought to Brookhaven College will be moving on to a full time university gig sometime soon.

So I got what Hannah said about Christie. I got it all.
May all who want to be makers have a Christie or an Adam.

“I started to see a lot of other things in that revelatory way reserved for drugs, death experiences, and miracles.”

I think to really shake things up in that way, artists have to be uncomfortable. To shake it up but still teach, which Blizard excels at on par with her level as an artist, is one in a million.

This is the first time I’ve read your blog and I think it’s my new favorite thing. As someone who was told by several of my mentors (even by Christie) that I had a special talent but just didn’t work hard enough, I feel like I have let my mentors down by letting my practice fall to the side of my life’s other demands. But reading something like this while doing laundry reminds me of all those people who believed in me and made me realize I can still hear them whispering in my ears (mostly telling me that I’m still as lazy as before and when will I learn to work without an imminent deadline?). I lately feel the pull of my practice calling me back, like a tether that was so long I had to wander really far off before I felt it’s fension and remembered it was there. While I feel ashamed sometimes for letting it get so far, I still feel the desire and maybe even the ability to make those people proud.