Performance Artists: Show Your Work at the McNay Art Museum

The McNay Art Museum in San Antonio has announced that it’s hosting an open call for performance artists who create works around the themes of gender and identity. Held in advance of the museum’s upcoming exhibition Transamerica/n: Gender, Identity, Appearance Today, which runs from June 20-September 15, 2019, the call will be used as a way to potentially include local and regional artists in the show. It also offers a chance for performers to receive critiques about their works from seasoned art professionals.

Conceived by René Paul Barilleaux, the McNay’s Head of Curatorial Affairs, and organized by the museum’s Assistant Curator, Jackie Edwards, and 2017-2018 Semmes Foundation Intern in Museum Studies, Bianca Alvarez, the show marks the 50th anniversary of the 1969 Stonewall Riots, which were an ignition factor of the gay liberation movement. Featuring artists from the US, Mexico, and Canada, the show is (via the museum) “the country’s first broad survey of contemporary artwork from across North America to explore the spectrum of gender identity as manifest in outward appearance.” Lauren Thompson, the museum’s 2018-2019 Semmes Foundation Intern in Museum Studies also assisted in developing the exhibition.

When asked why the exhibition’s curatorial team felt the need to host an open call for performance works, a representative from the McNay told Glasstire:

“Due to the open and welcoming nature with which Transamerica/n: Gender, Identity, Appearance Today was conceived, the exhibition’s curatorial team feels that an open call allows for the greatest potential of including any artist working in the south Texas region. Similar to a traditional open audition in theatre and film, the open process will inevitably focus critical attention on both established and emerging performers. This open call also presents a rare opportunity to engage the region’s diverse art community in a way that provides immediate professional feedback.”

The McNay’s open call workshop will be held on March 23, 2019. Performances can be complete pieces or excerpts of longer works. For additional details, see the flier below. 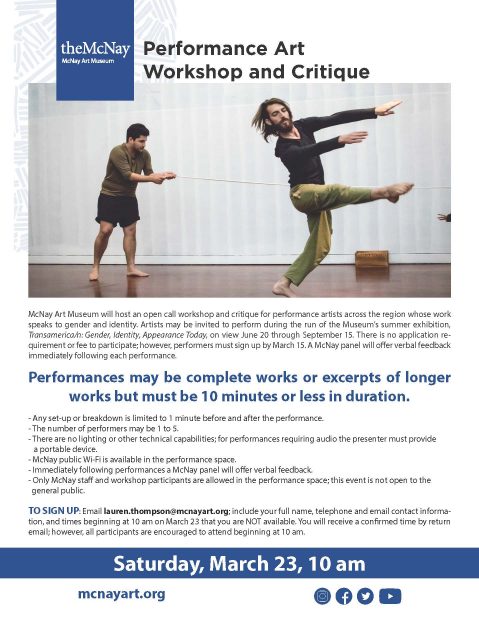