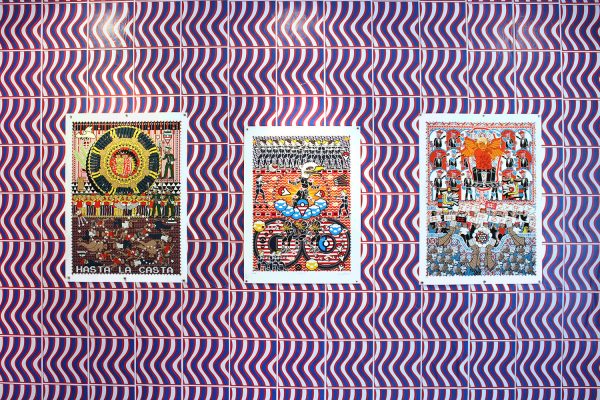 The National Association of Latino Arts and Cultures (NALAC), a San Antonio-based nonprofit that aims to promote Latino artists and other creatives across the US, announced this week its 2019 round of grants. Given out via NALAC’s Fund for the Arts Program, which is now in its 13th year, the grants range from $5,000 to $10,000 and were awarded to 43 individuals, troupes, groups, and organizations across the nation.

The projects take on multiple ways of storytelling and presentation, with many of them talking about issues of (via NALAC): “justice through diverse lenses such as labor rights, incarceration, migration, gender and cultural equity.”

Although most of the awards are open to all US-based applicants, five $5,400 grants, which were supported by the City of San Antonio’s Department of Arts & Culture, were earmarked for San Antonio-based artists. The winners of these awards include Amalia Leticia Ortiz, Anna De Luna, Marisela Barrera, Michael Menchaca, and Xelena Gonzalez. See below to learn more about these artists and their upcoming NALAC-funded projects.

Amalia Leticia Ortiz
To support the creation of a series of music videos for poem songs from the artists’ second poetry collection, The Canción Cannibal Cabaret and other songs. Focused on the theme of revolution, it is a refugee, POC, feminist, LGBTQ+ call to action. When performed the manuscript becomes a punk rock musical. The artist will hire a video producer, Pepe Garcia Gilling, to shoot and edit a series of videos which will stand on their own as music videos to promote the show and work. The music videos will also serve as a backdrop for future performances of the live show.

Anna De Luna
To support the completion and production of My Arab Fall, an original multi-media theatrical performance connecting Egypt’s Arab Spring to the plight of Latinas in the age of #METOO or #YOTAMBIEN. Seen through the eyes of two women, a naive yet eager Chicana tourist and an Egyptian activist fighting to change the world she lives in, this piece is a sometimes-comical, sometimes-harrowing exploration of sexual harassment/assault amid the dramatic social changes taking place in our world today.

Marisela Barrera
To support two one-hour radio productions of Tejana Rasquacha, a female-focused, working class and social justice oriented radio show that will feature ten San Antonio Tejana mujeres talking about their lives. The radio program aims to increase representation of local working class communities in San Antonio. The artist will arrange and record interviews, edit the programs and work with a local musician to compose original theme music for the show. Radio Esperanza has agreed to air these programs in July and August of 2019.

Michael Menchaca
To support a new series of works on paper that represent the impact of Silicon Valley innovations within the social fabric of Latinx communities. The artist will explore how “smart devices” have transformed communication and relationships within Latinx families. The project will be an embodiment of the contemporary social fabric of the Latinx community and give them a voice within a conversation involvinginnovative technology and social media usage. This project will be a continuation of the artist’s digital codex, which seeks to preserve cultural events through invented mythology.

Xelena Gonzalez
To support the creation of a family-friendly book that interweaves the images depicted in the classic Mexican game Lotería. The familiar cultural icons will become characters in a series of stories, poems, riddles, and remedies, to be shared with an audience of all ages in San Antonio. The “Lotería Night” will include lotería games, prizes, an interactive reading, and a chance to receive critical feedback from the audience. Resultant manuscript(s) will be readied for submission to publishers, thereby adding to the field of children’s literature, which is currently calling for cultural diversity.

NALAC and Ford Foundation Team Up for “Reclaiming...