A Repeat Viewing? ‘Monumental I’ at Barry Whistler Gallery 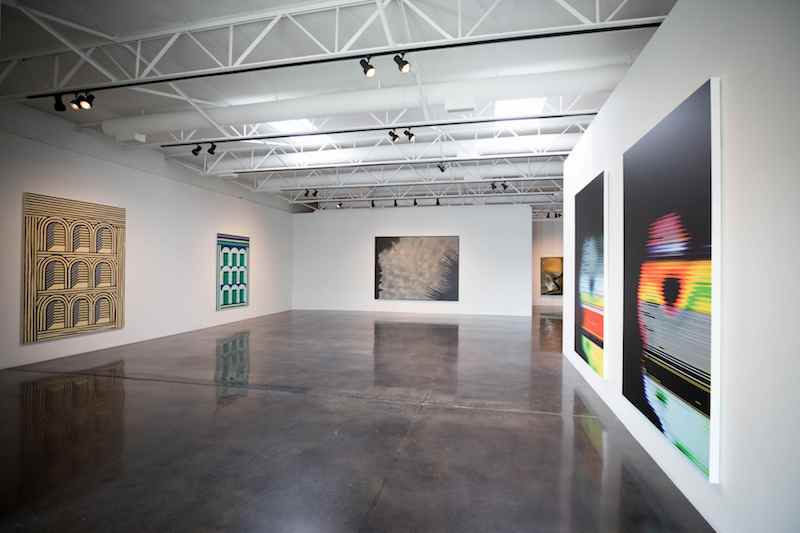 Installation view of Monumental I at Barry Whistler Gallery, Dallas

The Dallas non-profit Site131 currently has a show up in its Design District space featuring mostly local and a couple of national examples of what digital painting looks like in 2019. That show works because it’s localizing a contemporary art movement to Dallas.

But this writeup is about a separate but parallel show that features three of the same Dallas-based artists just down the street at Barry Whistler Gallery. Is it redundant to show works from the same artists and series concurrently in the same zip code, or, in this case, does it expand the conversation about printed paintings? 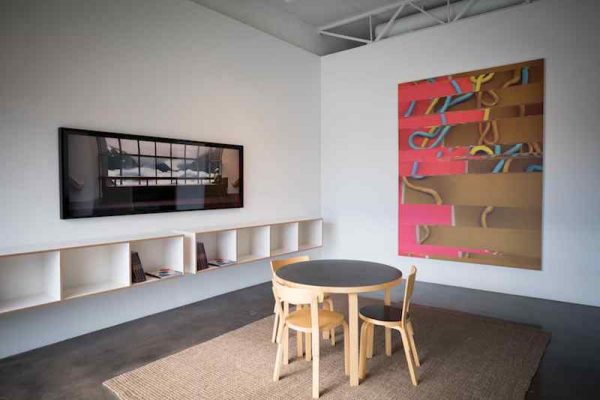 Monumental I, the group show on view at Barry Whistler, finds its theme in its name and vice versa: the work is meant to make us think about the definition of the monumental. For example: Skeet McAuley’s photograph, Portage Glacier Visitors Center, Alaska (1990) reveals a glacial wonder behind a condensated window, with one person looking out at it. This landscape, layered as it is, isn’t optimistic. We regard the glacier as monument, but, also: as both precious and imperiled? Do I ‘like’ this view? 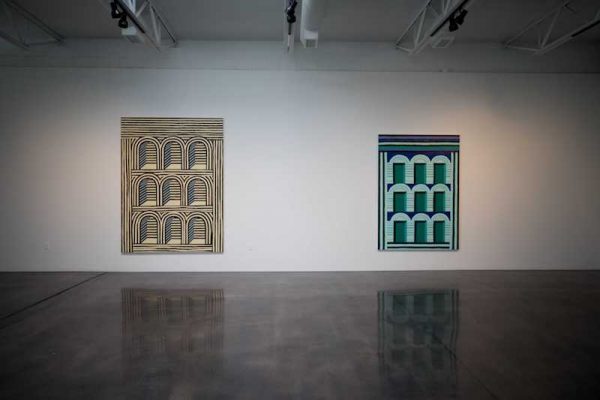 The show is dotted with single examples of some of the artists’ work, and John Pomara and Matt Kleberg each have two works up. The show ranges from photography to drawing to traditionally made painting (which I’ll argue are generative) to digital painting (which conversely, seem appropriative). The range feels so wide that it’s hard to pull it together beyond the idea of ‘monumental.’ To be fair, when I think of ‘monuments’ I think of localities, and these works are varied as far as where they’re coming from and where they’re headed. Allison V. Smith’s Tumbleweed. 2018. Marfa, Texas sits comfortably within her oeuvre of desolate Texan environs. Kleberg’s oilstick paintings are twinned compositions of stacked portals in varying colors. Ann Stautberg and Randy Twaddle are represented here with monochrome contemplations of the sky, in the shadows of telephone wires and undulating clouds. 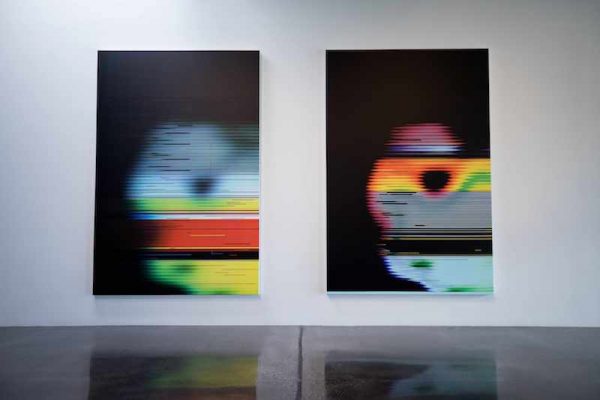 As mentioned above, the parallel in this show and what’s up at Site131 is digital painting, and the works here overlap those in Site’s Plugged-in Paintings (which was co-curated by Pomara), both compositionally, and in that they’re printed with UV ink on a substrate. Liz Trosper’s squiggled acrylic extrusions, Pomara’s heavily glitched portraits, and Lorraine Tady’s skeletal geometry all have associations with the artists’ connections to the University of Texas at Dallas (UTD). Trosper’s toothy zip (neon:ochre) was on view at the UTD’s Wilcox Space last year (for a more in-depth discussion about Trosper, go here). In seeing these three artists’ work at Barry Whistler, after Site131, I’m feeling that they stand out as a school of their own in a varied show of more traditional mediums.

My inclination is that repeated showings in multiple galleries of local artists working in similar ways will legitimize their practice in the eye of a larger public. At least for a while. It signals that Dallas spaces, commercial and non, are buying into the digital painting trend, and I’m glad to see it. Would it be improper for a commercial gallery to advertise a crash course on their artists’ methods, especially if viewer could be encouraged to travel only a few blocks over to visit more of the work? After seeing these works in more than one show, in the order that I did, I hope that those interested choose the full experience of seeing as much of it as they can, wherever they can catch it.

On view at Barry Whistler Gallery, Dallas, through March 16, 2019

This review is more of the same boring, glib nonsense that often leaks out of this site. The writer establishes a false conflict with this two shows in a zip code thing. Not only do Site 131 and Barry Whistler function completely different (one as non-profit and the other as a commercial gallery), but the rosters and theme of each show are completely different. Can we not show a LeWitt at the Nasher because we’re showing one at the DMA? It’s redundant in the same zip code? This meandering text wastes a lot of space on utter nonsense. If you have to link these two shows (simply because 2-3 artists are featured in both) then why not seriously examine the work of one of the fourteen or so artists included. The writer barely mentions the art in service of his navel-gazing. “It signals that Dallas spaces, commercial and non, are buying into the digital painting trend, and I’m glad to see it.” Is anyone editing this? Isn’t criticism supposed to be of-the-moment? Digital painting was trendy, like ten years ago…now it’s just like another way of making art, man. C’mon Glasstire, please up your game! This is just boring writing and a complete disservice to the art on view (and believe me or not, I actually have no affiliation with anyone featured). If you have nothing important to say, which this writer clearly does not, then don’t say it at all.